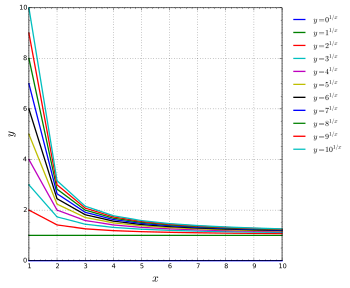 In mathematics, the nth root of a number x, where n is a positive integer, is a number r which, when raised to the power n yields x

where n is the degree of the root. A root of degree 2 is called a square root and a root of degree 3, a cube root. Roots of higher degree are referred by using ordinal numbers, as in fourth root, twentieth root, etc.

Roots are usually written using the radical symbol or radix

denoting the fourth root, and so on. In the expression

, n is called the index,

is the radical sign or radix, and x is called the radicand. Since the radical symbol denotes a function, when a number is presented under the radical symbol it must return only one result, so a non-negative real root, called the principal nth root, is preferred rather than others; if the only real root is negative, as for the cube root of –8, again the real root is considered the principal root. An unresolved root, especially one using the radical symbol, is often referred to as a surd[1] or a radical.[2] Any expression containing a radical, whether it is a square root, a cube root, or a higher root, is called a radical expression, and if it contains no transcendental functions or transcendental numbers it is called an algebraic expression.

In calculus, roots are treated as special cases of exponentiation, where the exponent is a fraction:

Roots are particularly important in the theory of infinite series; the root test determines the radius of convergence of a power series. Nth roots can also be defined for complex numbers, and the complex roots of 1 (the roots of unity) play an important role in higher mathematics. Galois theory can be used to determine which algebraic numbers can be expressed using roots, and to prove the Abel-Ruffini theorem, which states that a general polynomial equation of degree five or higher cannot be solved using roots alone; this result is also known as "the insolubility of the quintic".

Origin of the root symbol

The origin of the root symbol √ is largely speculative. Some sources imply that the symbol was first used by Arab mathematicians. One of those mathematicians was Abū al-Hasan ibn Alī al-Qalasādī (1421–1486). Legend has it that it was taken from the Arabic letter "ج‎" (ǧīm, /dʒim/), which is the first letter in the Arabic word "جذر‎" (jadhir, meaning "root"; /ˈdʒɑːðir/).[3] However, many scholars, including Leonhard Euler,[4] believe it originates from the letter "r", the first letter of the Latin word "radix" (meaning "root"), referring to the same mathematical operation. The symbol was first seen in print without the vinculum (the horizontal "bar" over the numbers inside the radical symbol) in the year 1525 in Die Coss by Christoff Rudolff, a German mathematician.

The Unicode and HTML character codes for the radical symbols are:

The term surd traces back to al-Khwārizmī (c. 825), who referred to rational and irrational numbers as audible and inaudible, respectively. This later led to the Arabic word "أصم‎" (asamm, meaning "deaf" or "dumb") for irrational number being translated into Latin as "surdus" (meaning "deaf" or "mute"). Gerard of Cremona (c. 1150), Fibonacci (1202), and then Robert Recorde (1551) all used the term to refer to unresolved irrational roots.[5] 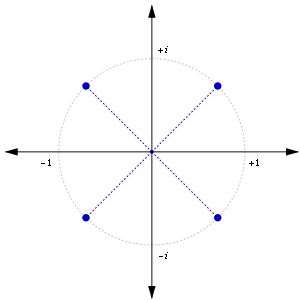 The four 4th roots of −1,
none of which is real 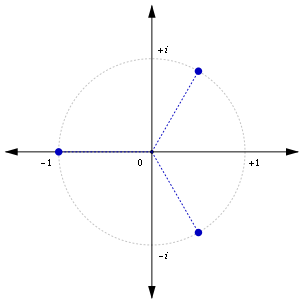 The three 3rd roots of −1,
one of which is a negative real

An nth root of a number x, where n is a positive integer, is any of the n real or complex numbers r whose nth power is x:

Every positive real number x has a single positive nth root, called the principal nth root, which is written

. For n equal to 2 this is called the principal square root and the n is omitted. The nth root can also be represented using exponentiation as x1/n.

but −2 does not have any real 6th roots.

Every non-zero number x, real or complex, has n different complex number nth roots including any positive or negative roots. They are all distinct except in the case of x = 0, all of whose nth roots equal 0.

The nth roots of almost all numbers (all integers except the nth powers, and all rationals except the quotients of two nth powers) are irrational. For example,

All nth roots of integers, are algebraic numbers. 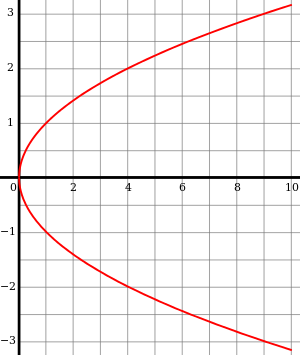 A square root of a number x is a number r which, when squared, becomes x: 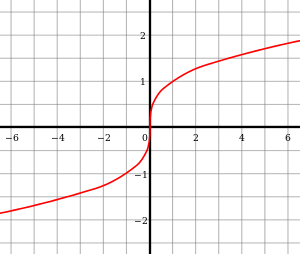 A cube root of a number x is a number r whose cube is x:

Every positive real number has a positive nth root and the rules for operations with such surds are straightforward:

Using the exponent form as in

normally makes it easier to cancel out powers and roots.

Problems can occur when taking the nth roots of negative or complex numbers. For instance:

when taking the principal value of the roots.

Simplified form of a radical expression

For example, to write the radical expression

in simplified form, we can proceed as follows. First, look for a perfect square under the square root sign and remove it:

Next, there is a fraction under the radical sign, which we change as follows:

Finally, we remove the radical from the denominator as follows:

When there is a denominator involving surds it is always possible to find a factor to multiply both numerator and denominator by to simplify the expression.[7][8] For instance using the factorization of the sum of two cubes:

Simplifying radical expressions involving nested radicals can be quite difficult. It is not immediately obvious for instance that:

The above can be derived through:

The radical or root may be represented by the infinite series:

. This expression can be derived from the binomial series.

where the dots signify that the decimal expression does not end after any finite number of digits. Since in this example the digits after the decimal never enter a repeating pattern, the number is irrational.

The nth root of a number A can be computed by the nth root algorithm, a special case of Newton's method. Start with an initial guess x0 and then iterate using the recurrence relation

until the desired precision is reached.

Depending on the application, it may be enough to use only the first Newton approximant:

The error in the approximation is only about 0.03%.

Newton's method can be modified to produce a generalized continued fraction for the nth root which can be modified in various ways as described in that article. For example:

In the case of the fifth root of 34 above (after dividing out selected common factors):

Building on the digit-by-digit calculation of a square root, it can be seen that the formula used there,

, follows a pattern involving Pascal's triangle. For the nth root of a number

is defined as the value of element

of Pascal's Triangle such that

, we can rewrite the expression as

. For convenience, call the result of this expression

. Using this more general expression, any positive principal root can be computed, digit-by-digit, as follows.

Beginning with the left-most group of digits, do the following procedure for each group:

Find the cube root of 4192 to the nearest hundredth.

The principal nth root of a positive number can be computed using logarithms. Starting from the equation that defines r as an nth root of x, namely

with x positive and therefore its principal root r also positive, one takes logarithms of both sides (any base of the logarithm will do; base 10 is used here) to obtain

The root r is recovered from this by taking the antilog:

For the case in which x is negative and n is odd, there is one real root r which is also negative. This can be found by first multiplying both sides of the defining equation by –1 to obtain

Every complex number other than 0 has n different nth roots. 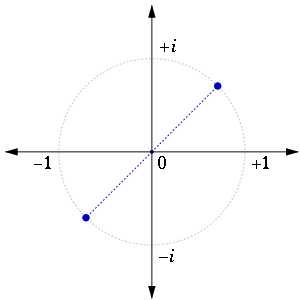 The square roots of i

A principal root of a complex number may be chosen in various ways, for example

to the half plane with non-negative imaginary(real) part. The last branch cut is presupposed in mathematical software like Matlab or Scilab. 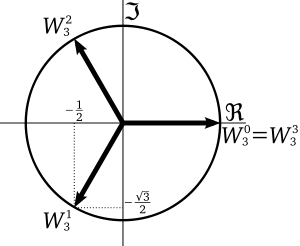 The three 3rd roots of 1
Main article: Root of unity

The number 1 has n different nth roots in the complex plane, namely

These roots are evenly spaced around the unit circle in the complex plane, at angles which are multiples of

Every complex number has n different nth roots in the complex plane. These are

In polar form, a single nth root may be found by the formula

Here r is the magnitude (the modulus, also called the absolute value) of the number whose root is to be taken; if the number can be written as a+bi then

is the angle formed as one pivots on the origin counterclockwise from the positive horizontal axis to a ray going from the origin to the number; it has the properties that

is the angle defined in the same way for the number whose root is being taken. Furthermore, all n of the nth roots are at equally spaced angles from each other.

As with square roots, the formula above does not define a continuous function over the entire complex plane, but instead has a branch cut at points where θ / n is discontinuous.

It was once conjectured that all polynomial equations could be solved algebraically (that is, that all roots of a polynomial could be expressed in terms of a finite number of radicals and elementary operations). However, while this is true for third degree polynomials (cubics) and fourth degree polynomials (quartics), the Abel-Ruffini theorem (1824) shows that this is not true in general when the degree is 5 or greater. For example, the solutions of the equation

cannot be expressed in terms of radicals. (cf. quintic equation)