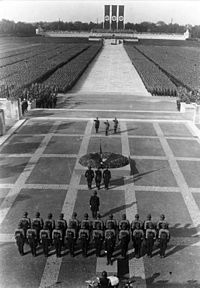 The Totenehrung (honoring of the dead) at the 1934 Nuremberg Rally. SS leader Heinrich Himmler, Adolf Hitler and SA leader Viktor Lutze (from L to R) on the stone terrace in front of the Ehrenhalle (Hall of Honor) in the Luitpoldarena. In the background is the crescent-shaped Ehrentribüne (the Tribune of Honor).

Reichsparteitag (help·info), meaning National Party Convention) was the annual rally of the Nazi Party in Germany, held from 1923 to 1938.[1] They were large Nazi propaganda events, especially after Hitler's rise to power in 1933. These events were held at the Nazi party rally grounds in Nuremberg from 1933 to 1938 and are usually referred to in English as the "Nuremberg Rallies". Many films were made to commemorate them, the most famous of which is Leni Riefenstahl's Triumph of the Will.

The first Nazi Party rallies took place in 1923 in Munich and in 1926 in Weimar. From 1927 on, they took place exclusively in Nuremberg. The Party selected Nuremberg for pragmatic reasons: it was in the center of the German Reich and the local Luitpoldhain was well suited as a venue. In addition, the Nazis could rely on the well-organized local branch of the party in Franconia, then led by Gauleiter Julius Streicher. The Nuremberg police were sympathetic to the event.

Later, the location was justified by the Nazi Party by putting it into the tradition of the Imperial Diet (German Reichstag) of the Holy Roman Empire, considered as the First Reich. After 1933, the rallies took place near the time of the Autumn equinox, under the title of "The German people's National Party days" (Reichsparteitage des deutschen Volkes), which was intended to symbolize the solidarity between the German people and the Nazi Party. This point was further emphasized by the yearly growing number of participants, which finally reached over half a million from all sections of the party, the army and the state.

Each rally was given a programmatic title, which related to recent national events:

File:Triumph des Willens poster.jpg
Poster for Triumph of the Will by Leni Riefenstahl in 1934

Official films for the rallies began in 1927, with the establishment of the NSDAP (Nazi Party) film office. The most famous films were made by Leni Riefenstahl for the rallies between 1933 and 1935. Relating to the theme of the rally, she called her first movie Victory of Faith (Der Sieg des Glaubens). This movie was taken out of circulation after the Night of the Long Knives, although a copy survived in Britain and has recently been made available on the Internet Archive for public viewing. The rally of 1934 became the setting for the award-winning Triumph of the Will (Triumph des Willens). Several generals in the Wehrmacht protested over the minimal army presence in the film: Hitler apparently proposed modifying the film to placate the generals, but Riefenstahl refused his suggestion. She did agree to return to the 1935 rally and make a film exclusively about the Wehrmacht, which became Tag der Freiheit: Unsere Wehrmacht.

The rallies for 1936 and 1937 were covered in Festliches Nürnberg, which was shorter than the others, only 21 minutes.

There were two sets of official or semi-official books covering the rallies. The "red books" were officially published by the NSDAP and contained the proceedings of the "congress" as well as full texts of every speech given in chronological order.

The "blue books" were published initially by Julius Streicher, the Gauleiter of Nuremberg, later by Hanns Kerrl, not by the party press. These were larger scale books that included the text of speeches and proceedings, as well as larger photographs.

In addition to these, collections of Heinrich Hoffman's photographs were published to commemorate each Party congress, as well as pamphlets of Hitler's speeches. Both series of books are much sought after collectors items.[6]