The Open Systems Interconnection model (OSI model) is a conceptual model that characterizes and standardizes the communication functions of a telecommunication or computing system without regard to its underlying internal structure and technology. Its goal is the interoperability of diverse communication systems with standard protocols. The model partitions a communication system into abstraction layers. The original version of the model defined seven layers.

A layer serves the layer above it and is served by the layer below it. For example, a layer that provides error-free communications across a network provides the path needed by applications above it, while it calls the next lower layer to send and receive packets that comprise the contents of that path. Two instances at the same layer are visualized as connected by a horizontal connection in that layer.

The model is a product of the Open Systems Interconnection project at the International Organization for Standardization (ISO), maintained by the identification ISO/IEC 7498-1. 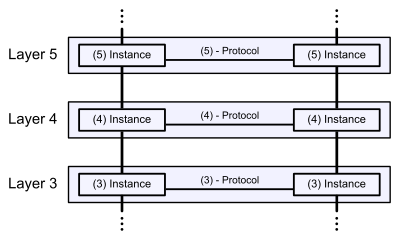 Communication in the OSI-Model (example with layers 3 to 5)

OSI had two major components, an abstract model of networking, called the Basic Reference Model or seven-layer model, and a set of specific protocols.

The concept of a seven-layer model was provided by the work of Charles Bachman at Honeywell Information Services. Various aspects of OSI design evolved from experiences with the ARPANET, NPLNET, EIN, CYCLADES network and the work in IFIP WG6.1. The new design was documented in ISO 7498 and its various addenda. In this model, a networking system was divided into layers. Within each layer, one or more entities implement its functionality. Each entity interacted directly only with the layer immediately beneath it, and provided facilities for use by the layer above it.

Protocols enable an entity in one host to interact with a corresponding entity at the same layer in another host. Service definitions abstractly describe the functionality provided to an (N)-layer by an (N-1) layer, where N was one of the seven layers of protocols operating in the local host.

The OSI standards documents are available from the ITU-T as the X.200-series of recommendations.[1] Some of the protocol specifications were also available as part of the ITU-T X series. The equivalent ISO and ISO/IEC standards for the OSI model were available from ISO. Not all are free of charge.[2]

The recommendation X.200 describes seven layers, labeled 1 to 7. Layer 1 is the lowest layer in this model.

At each level N, two entities at the communicating devices (layer N peers) exchange protocol data units (PDUs) by means of a layer N protocol. Each PDU contains a payload, called the service data unit (SDU), along with protocol-related headers or footers.

Data processing by two communicating OSI-compatible devices is done as such:

Some orthogonal aspects, such as management and security, involve all of the layers (See ITU-T X.800 Recommendation[4]). These services are aimed at improving the CIA triad - confidentiality, integrity, and availability - of the transmitted data. In practice, the availability of a communication service is determined by the interaction between network design and network management protocols. Appropriate choices for both of these are needed to protect against denial of service.[citation needed]

The Point-to-Point Protocol (PPP) is a data link layer protocol that can operate over several different physical layers, such as synchronous and asynchronous serial lines.

The network layer provides the functional and procedural means of transferring variable length data sequences (called packets) from one node to another connected in "different networks". A network is a medium to which many nodes can be connected, on which every node has an address and which permits nodes connected to it to transfer messages to other nodes connected to it by merely providing the content of a message and the address of the destination node and letting the network find the way to deliver the message to the destination node, possibly routing it through intermediate nodes. If the message is too large to be transmitted from one node to another on the data link layer between those nodes, the network may implement message delivery by splitting the message into several fragments at one node, sending the fragments independently, and reassembling the fragments at another node. It may, but does not need to, report delivery errors.

A number of layer-management protocols, a function defined in the management annex, ISO 7498/4, belong to the network layer. These include routing protocols, multicast group management, network-layer information and error, and network-layer address assignment. It is the function of the payload that makes these belong to the network layer, not the protocol that carries them.[6]

The transport layer provides the functional and procedural means of transferring variable-length data sequences from a source to a destination host, while maintaining the quality of service functions.

OSI defines five classes of connection-mode transport protocols ranging from class 0 (which is also known as TP0 and provides the fewest features) to class 4 (TP4, designed for less reliable networks, similar to the Internet). Class 0 contains no error recovery, and was designed for use on network layers that provide error-free connections. Class 4 is closest to TCP, although TCP contains functions, such as the graceful close, which OSI assigns to the session layer. Also, all OSI TP connection-mode protocol classes provide expedited data and preservation of record boundaries. Detailed characteristics of TP0-4 classes are shown in the following table:[7]

An easy way to visualize the transport layer is to compare it with a post office, which deals with the dispatch and classification of mail and parcels sent. A post office inspects only the outer envelope of mail to determine its delivery. Higher layers may have the equivalent of double envelopes, such as cryptographic presentation services that can be read by the addressee only. Roughly speaking, tunneling protocols operate at the transport layer, such as carrying non-IP protocols such as IBM's SNA or Novell's IPX over an IP network, or end-to-end encryption with IPsec. While Generic Routing Encapsulation (GRE) might seem to be a network-layer protocol, if the encapsulation of the payload takes place only at the endpoint, GRE becomes closer to a transport protocol that uses IP headers but contains complete Layer 2 frames or Layer 3 packets to deliver to the endpoint. L2TP carries PPP frames inside transport segments.

Although not developed under the OSI Reference Model and not strictly conforming to the OSI definition of the transport layer, the Transmission Control Protocol (TCP) and the User Datagram Protocol (UDP) of the Internet Protocol Suite are commonly categorized as layer-4 protocols within OSI.

The session layer controls the dialogues (connections) between computers. It establishes, manages and terminates the connections between the local and remote application. It provides for full-duplex, half-duplex, or simplex operation, and establishes checkpointing, adjournment, termination, and restart procedures. The OSI model made this layer responsible for graceful close of sessions, which is a property of the Transmission Control Protocol, and also for session checkpointing and recovery, which is not usually used in the Internet Protocol Suite. The session layer is commonly implemented explicitly in application environments that use remote procedure calls.

The original presentation structure used the Basic Encoding Rules of Abstract Syntax Notation One (ASN.1), with capabilities such as converting an EBCDIC-coded text file to an ASCII-coded file, or serialization of objects and other data structures from and to XML. ASN.1 effectively makes an application protocol invariant with respect to syntax.

Cross-layer functions are services that are not tied to a given layer, but may affect more than one layer. Examples include the following:

Neither the OSI Reference Model nor OSI protocols specify any programming interfaces, other than deliberately abstract service specifications. Protocol specifications precisely define the interfaces between different computers, but the software interfaces inside computers, known as network sockets are implementation-specific.

Interface standards, except for the physical layer to media, are approximate implementations of OSI service specifications.

The design of protocols in the TCP/IP model of the Internet does not concern itself with strict hierarchical encapsulation and layering.[16] RFC 3439 contains a section entitled "Layering considered harmful".[17] TCP/IP does recognize four broad layers of functionality which are derived from the operating scope of their contained protocols: the scope of the software application; the end-to-end transport connection; the internetworking range; and the scope of the direct links to other nodes on the local network.[18]

Despite using a different concept for layering than the OSI model, these layers are often compared with the OSI layering scheme in the following way:

These comparisons are based on the original seven-layer protocol model as defined in ISO 7498, rather than refinements in such things as the internal organization of the network layer document.[citation needed]

The presumably strict layering of the OSI model as it is usually described does not present contradictions in TCP/IP, as it is permissible that protocol usage does not follow the hierarchy implied in a layered model. Such examples exist in some routing protocols (for example OSPF), or in the description of tunneling protocols, which provide a link layer for an application, although the tunnel host protocol might well be a transport or even an application-layer protocol in its own right.[citation needed]