Aerial view of Oʻahu with freeways and highways, 3D computer-generated image
Fly-around tour of the island

Oʻahu (pronounced [oˈʔɐhu]) or Oahu /oʊˈɑːhuː/, known as "The Gathering Place", is the third largest of the Hawaiian Islands; however, it is home to about two-thirds of the population of the U.S. state of Hawaii, and is the home of Honolulu International Airport. The state capital, Honolulu, is on Oʻahu's southeast coast. Including small close-in offshore islands such as Ford Island and the islands in Kaneohe Bay and off the eastern (windward) coast, it has a total land area of 596.7 square miles (1,545.4 km2), making it the 20th largest island in the United States.[1] Along with the rest of the Hawaiian Islands, Oahu is one of the largest and northernmost islands of Polynesia.

The island is home to about 976,199 people (approximately 72% of the resident population of the state, with approximately 81% of those living on the "city" side of the island). Oʻahu has for a long time been known as "The Gathering Place". However, the term Oʻahu has no confirmed meaning in Hawaiian, other than that of the place itself.[3] Ancient Hawaiian tradition attributes the name's origin in the legend of Hawaiʻiloa, the Polynesian navigator credited with discovery of the Hawaiian Islands. The story relates that he named the island after a son.

Residents of Oʻahu refer to themselves as "locals" (as done throughout Hawaiʻi), no matter their ancestry.

The city of Honolulu—largest city, state capital, and main deepwater marine port for the State of Hawaiʻi—is located here. As a jurisdictional unit, the entire island of Oʻahu is in the City & County of Honolulu, although as a place name, Honolulu occupies only a portion of the southeast end of the island.

Being roughly diamond-shaped, surrounded by ocean and divided by mountain ranges, directions on Oʻahu are not generally described with the compass directions found throughout the world. Locals instead use "ewa" (pronounced "eh-va") to mean toward the western tip of the island, "Diamond Head" to be toward the eastern tip, "mauka" (pronounced "moww-ka") is toward the mountains and "makai" toward the sea.

Locals consider the island to be divided into various areas, which may overlap. The most commonly accepted areas are the "City", "Town" or "Town side", which is the metropolitan area from Halawa to the area below Diamond Head (residents of the island north of the Koʻolau Mountains consider the Town Side to be the entire southern half); "West Oʻahu," which goes from Pearl Harbor to Kapolei, Ewa and may include the Makaha and Waianae areas; the "North Shore" (northwestern coast); the "Windward Side" (northeastern coast); the "East Side" (the eastern portion of the island, including both the Windward Side and the area east of Diamond Head; and "The Valley" or "Central Oʻahu" which runs northwest from Pearl Harbor toward Haleiwa. These terms are somewhat flexible, depending on the area in which the user lives, and are used in a mostly general way. Oahu is also known for having the longest rain shower in history with over 200 days spent with continuous rain. Kaneohe Ranch, Oahu, Hawaii reported 247 straight days with rain from August 27, 1993 to April 30, 1994. The island has many nicknames one of them being "rainbow state." This is because rainbows are a common sight in Hawaii due to the frequent rain showers. The average temperature in Oahu is around 70 to 85 degrees and the island is the warmest in June through October. The weather during the winter is cooler, but still warm with the average temperature of 68-78 degrees.

The Windward side, also called the east side, is known for some of the most beautiful beaches in the world. Lani Kai meaning "heavenly sea" in Hawaiian, is characterized by the two islands directly in front of Lani Kai beach. Lani Kai Beach is located in a neighborhood within Kailua, on the windward coast of Oahu, Hawaii. This small 1/2 mile beach has been consistently ranked among the best beaches in the world.[4] 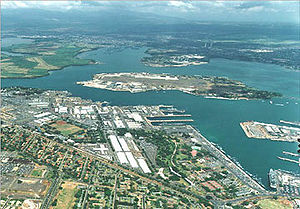 Pearl Harbor is the home of the largest U.S. Navy fleet in the Pacific. The harbor was attacked on December 7, 1941, by the Japanese bringing the United States into World War II. 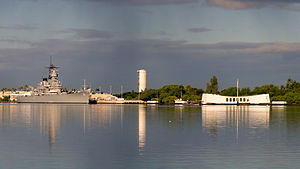 The 300-year-old Kingdom of Oʻahu was once ruled by the most ancient Aliʻi in all of the Hawaiian Islands. The first great king of Oʻahu was Mailikukahi, the law maker, who was followed by many generation of monarchs. Kualii was the first of the warlike kings and so were his sons. In 1773, the throne fell upon Kahahana, the son of Elani of Ewa. In 1783 Kahekili II, King of Maui, conquered Oʻahu and deposed the reigning family and then made his son Kalanikupule king of Oʻahu. Kamehameha the Great would conquer in the mountain Kalanikupule's force in the Battle of Nuʻuanu. Kamehameha founded the Kingdom of Hawaiʻi with the conquest of Oʻahu in 1795. Hawaiʻi would not be unified until the islands of Kauaʻi and Niʻihau surrendered under King Kaumualii in 1810. Kamehameha III moved his capital from Lāhainā, Maui to Honolulu, Oʻahu in 1845. ʻIolani Palace, built later by other members of the royal family, is still standing, and is the only royal palace on American soil.

Oʻahu was apparently the first of the Hawaiian Islands sighted by the crew of HMS Resolution on January 19, 1776 during Captain James Cook's third Pacific expedition. Escorted by HMS Discovery, the expedition was surprised to find high islands this far north in the central Pacific. Oʻahu was not actually visited by Europeans until February 28, 1779 when Captain Charles Clerke aboard HMS Resolution stepped ashore at Waimea Bay. Clerke had taken command of the ship after Capt. Cook was killed at Kealakekua Bay (island of Hawaiʻi) on February 14, and was leaving the islands for the North Pacific.

The Imperial Japanese Navy attack on Pearl Harbor, Oʻahu on the morning of December 7, 1941 brought the United States into World War II. The surprise attack was aimed at the Pacific Fleet of the United States Navy and its defending Army Air Forces and Marine Air Forces. The attack damaged or destroyed twelve American warships, destroyed 188 aircraft, and resulted in the deaths of 2,335 American servicemen and 68 civilians (of those, 1,177 were the result of the destruction of the USS Arizona alone).

An earthquake, measuring 6.7 on the moment magnitude scale, struck the island of Hawai'i and the surrounding islands at 07:07:49 HST on October 15, 2006, causing an island-wide power outage and over $200 million in damage.

Today, Oʻahu has become a tourism and shopping haven. Over five million visitors (mainly from the American mainland and Japan) flock there every year to enjoy the quintessential island holiday experience. 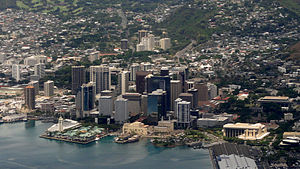 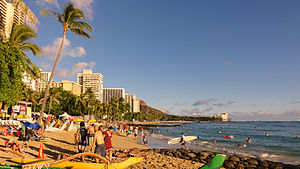 Waikīkī Beach is one of the best known beaches in the world. 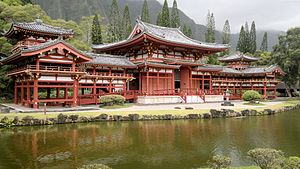 Valley of the Temples Memorial Park near the island's eastern shore 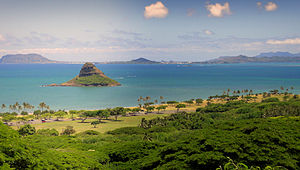 Due to its beauty, easy access from Hollywood, and incentives offered by the state and local governments, Oʻahu has been featured in many movies and television shows. A sampling of notable films and shows that have shot scenes on Oʻahu includes, but is not limited to:

Beginning with a contract with the U.S. Navy in 2001, Ocean Power Technologies began ocean-testing its wave power generation system at the U.S. Marine Corps Base Hawaii (MCBH) at Kaneohe Bay. The Oʻahu system was launched under the company's program with the U.S. Navy for ocean testing and demonstration of such systems, including connection to the Oʻahu grid.[7]