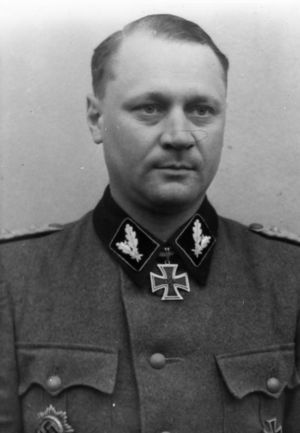 Joachim Rumohr, as an SS-Oberführer of the Waffen-SS

Oberführer was an early paramilitary rank of the Nazi Party dating back to 1921. Translated as "senior leader", an Oberführer was typically a Nazi Party member in charge of a group of paramilitary units in a particular geographical region.[1] From 1921 to 1925, the phrase Oberführer was used as a title in the Sturmabteilung (SA), but became an actual SA rank after 1926.

Oberführer was also a rank of the Schutzstaffel (SS, at that time a branch of the SA), established in 1925 as Gauführer, a rank for SS officers in charge of SS personnel in the several Gaue throughout Germany; in 1928 the rank was renamed Oberführer, and used of the commanders of the three regional SS-Oberführerbereiche. In 1930, the SS was reorganized into SS-Gruppen and Brigaden, at which time Oberführer became subordinate to the higher rank of Brigadeführer. By 1932, Oberführer was an established rank of the SA, SS and NSKK.[1][2] It was considered at that time to be the first general officer rank, approximately the equivalent to a brigadier general.[citation needed]

Oberführer wore two oak leaves on the uniform collar rank patch, along with the shoulder boards and lapels of a general officer.[3] In 1938, the status of SS-Oberführer began to change with the rise of the SS-Verfügungstruppe which would later become the Waffen-SS. Since Brigadeführer was rated equal to a Generalmajor, and Standartenführer to an Oberst, Oberführer had no military equivalent and quickly became regarded as a senior colonel rank.[4] This distinction continues in historical circles with most texts referring to Oberführer as a senior colonel rank[4][5] while some others state it has a military equivalent to a British Army brigadier.[6]

Emil Maurice, a founding member of the SS in 1925, held this rank. Also, Julian Scherner, immortalized in the film Schindler's List as the SS and Police Leader of Kraków[citation needed] and Ferdinand Porsche.[7]