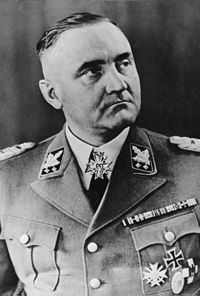 Gottlob Berger, commander of the SS-Hauptamt, wearing the (post April 1942) rank insignia of an SS-Obergruppenführer and a superimposed Knight's Cross of the War Merit Cross

The rank of Obergruppenführer was created in 1932 by Ernst Röhm and was intended as a senior most rank of the Nazi stormtroopers for use by Röhm and his top SA generals. In its initial concept, the rank was intended to be held by members of the Oberste SA-Führung (Supreme SA Command) and also by veteran commanders of certain SA-Gruppen (SA groups). Some of the early promotions to the rank included Ernst Röhm, Viktor Lutze, Edmund Heines, August Schneidhüber, and Fritz Ritter von Krausser.

The rank of SA-Obergruppenführer was the most senior rank of the Sturmabteilung until the spring of 1933, after which time Röhm created the rank of Stabschef (formerly a title for the SA Chief of Staff) and promoted himself to the position.

Also in the summer of 1933, Heinrich Himmler was promoted by Adolf Hitler to the newly created rank of SS-Obergruppenführer with the intent being to make Himmler the equivalent of the senior commanders of the SA, to which the SS was still subordinated. Although Himmler usually referred to himself as Reichsführer-SS, before 1934 this was simply a title for the SS commander, and not yet an actual rank. Shortly after Himmler's promotion, Hitler further promoted Franz Xaver Schwarz, with Himmler's date of rank backdated to 1 January 1933 in order to confirm his seniority as the top officer within the SS. In September 1933, so as to prevent a power struggle within the SS, Hitler further promoted Kurt Daluege who commanded most of the SS in the Berlin region. Daluege's promotion was to avoid the SS splitting into two separate entities, one based in Northern Germany under Daluege and the other in Bavaria under Himmler. This early SS disunity became a non-issue after a common ground was found amongst SS leaders in their general hatred of the SA.

Udo von Woyrsch and Friedrich Wilhelm Krüger were promoted to SS-Obergruppenführer in 1935 while Josias Erbprinz zu Waldeck und Pyrmont and Max Amann received the rank a year later along with Friedrich Karl Freiherr von Eberstein and Philipp Bouhler. The year 1936 saw several promotions to the rank, including Friedrich Jecklen who would become one of the most infamous SS and Police Leaders on the Eastern Front during World War II. The last pre-war promotion to the rank of SS-Obergruppenführer was in 1937 when Ernst Heinrich Schmauser received the rank. Upon the outbreak of World War II, there were seventeen men who held the rank of SS-Obergruppenführer.

During the Second World War, there were eighty-eight promotions to the rank, of which twenty-two were considered regular officers of the Waffen-SS. The first wartime promotions to SS-Obergruppenführer occurred in April 1940 when the rank was granted to Joachim von Ribbentrop, Martin Bormann and Hans Lammers; Otto Dietrich was promoted a year later. All four promotions were honorary SS ranks with the first promotion of an active SS officer occurring in September 1941 when the rank was granted to Reinhard Heydrich. The first wartime promotion of a Waffen-SS officer was on 20 April 1942 when Theodor Eicke was promoted to SS-Obergruppenführer und General der Waffen-SS. Sepp Dietrich remained senior, having served as General der SS-VT (SS-Verfügungstruppe) upon the outbreak of World War II in 1939.

Two SS officers would be demoted from the rank of SS-Obergruppenführer: Rudolf Hess and Wolf-Heinrich Graf von Helldorf. Hess was stripped of his rank and expelled from both the SS and Nazi Party after his abortive flight to England in 1941. Von Helldorf was stricken from the SS rolls in 1944 after the 20 July plot against Hitler. Von Helldorf was a unique case, in that his SS rank had been bestowed for technical reasons in order to command the Berlin Police. While holding SA membership, von Helldorf was never actually an SS member although for administrative purposes he held SS rank and was ranked as the 15th most senior SS officer.

One hundred and six men would eventually hold the rank of SS-Obergruppenführer with ninety-seven such officers listed on the SS seniority list in 1944. Several SS-Obergruppführer would die during World War II, some of the more notable being Reinhard Heydrich, Theodor Eicke, and Artur Phleps. The last promotion was made in March 1945 to Hans Kammler.