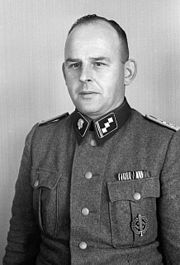 An SS-Obersturmführer serving in KZ Mauthausen.

Obersturmführer was a Nazi party paramilitary rank that was used in several Nazi organisations, such as the SA, SS, NSKK and the NSFK. Translated as “senior assault (or storm) leader”,[1] the rank of Obersturmführer was first created in 1932 as the result of an expansion of the Sturmabteilung (SA) and the need for an additional rank in the officer corps. Obersturmführer also became an SS rank at that same time.[2]

The insignia for Obersturmführer was three silver pips and a silver stripe centered on a uniform collar patch. The rank was senior to an Untersturmführer (or Sturmführer in the SA[1]) and junior to the rank of Hauptsturmführer.[3]

Some notable personnel of this rank include: