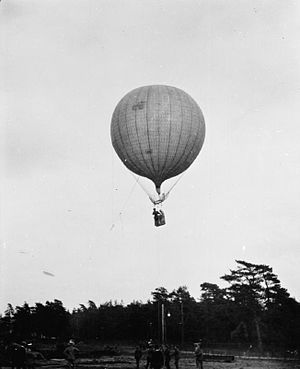 Observation balloon is a type of balloon that is employed as aerial platforms for intelligence gathering and artillery spotting. Use of observation balloons began during the French Revolutionary Wars, reaching their zenith during World War I, and they continue in limited use today.

Typically, balloons were tethered to a steel cable attached to a winch that reeled the gasbag to its desired height (usually 1,000-1,500 metres) and retrieved it at the end of an observation session. 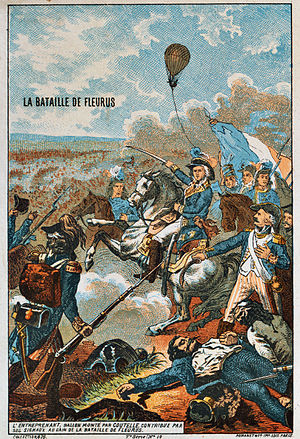 The battle of Fleurus, 26 June 1794, saw the first military use of an aircraft (L'Entreprenant).

The first military use of observation balloons was by the French Aerostatic Corps during the French Revolutionary Wars, the very first time during the Battle of Fleurus (1794).[1] The oldest preserved observation balloon, L'Intrépide, is on display in a Vienna museum. They were also used by both sides during the American Civil War (1861–65)[2] and continued in use during the Franco-Prussian War (1870–71).[3] Balloons were first deployed by the British Army's Royal Engineers during the expeditions to Bechuanaland in 1884 and Suakin in 1885.[4] They were also deployed during the Second Boer War (1899–1902), where they were used in artillery observation at the Battle of Magersfontein and during the Siege of Ladysmith.[5] 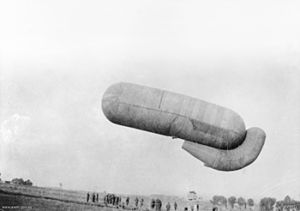 British balloon of the German Parseval-Siegsfeld type, 1916. The rear "tail" fills with air automatically through an opening facing the wind. 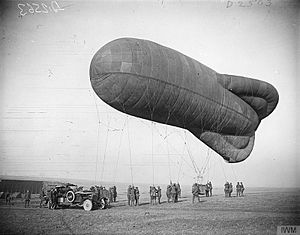 Caquot type dirigible, used by the Allies in the mid-latter part of WWI

World War I was the high point for the military use of observation balloons, which were extensively deployed by both sides. The British, despite their experience in late 1800s Africa, were behind developments and were still using spherical balloons. These were quickly replaced by versions, commonly referred to as kite balloons, which were flyable and could operate in more extreme weather conditions; at first the German Parseval-Siegsfeld type balloon, and then French Caquot type dirigible. By World War I, artillery had developed to the point where it was capable of engaging targets beyond the visual range of a ground-based observer. Positioning artillery observers on balloons, generally a few miles behind the front lines and at altitude, allowed them to see targets at greater range than they could on the ground. This allowed the artillery to take advantage of its increased range.[6]

Because of their importance as observation platforms, balloons were defended by anti-aircraft guns, groups of machine guns for low altitude defence and patrolling fighter aircraft. Attacking a balloon was a risky venture but some pilots relished the challenge. The most successful were known as balloon busters, including such notables as Belgium's Willy Coppens, Germany's Friedrich Ritter von Röth, America's Frank Luke, and the Frenchmen Léon Bourjade, Michel Coiffard and Maurice Boyau. Many expert balloon busters were careful not to go below 1,000 feet (300 m) in order to avoid exposure to anti-aircraft guns and machine-guns.

World War I observation crews were the first to use parachutes, long before they were adopted by fixed wing aircrews. These were a primitive type, where the main part was in a bag suspended from the balloon, with the pilot only wearing a simple body harness around his waist, with lines from the harness attached to the main parachute in the bag. When the balloonist jumped, the main part of the parachute was pulled from the bag, with the shroud lines first, followed by the main canopy. This type of parachute was first adopted by the Germans and then later by the British and French for their observation balloon crews.[6]

Observation balloons began to be used at sea for anti-submarine purposes towards the end of World War I.[7] Observation balloons also played a role during the Cold War; for example, Project Mogul used high-altitude observation balloons to monitor Soviet nuclear tests. However, heavier-than-air craft now performed the vast majority of operations. Aerostats have been used by US and coalition military forces in Iraq and in Afghanistan.[8]

The idiom "The balloon's going up!" as an expression for impending battle is derived from the very fact that an observation balloon's ascent likely signaled a preparatory bombardment for an offensive.[9]