From Infogalactic: the planetary knowledge core
Jump to: navigation, search
Not to be confused with Underwater topography. 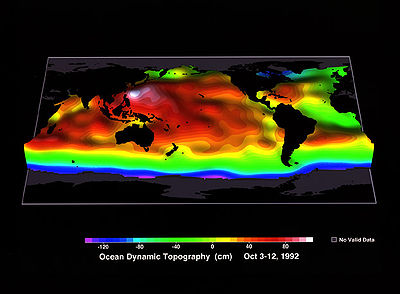 TOPEX/Poseidon was the first space mission that allowed scientists to map ocean topography with sufficient accuracy to study the large-scale current systems of the world's ocean. Although this image was constructed from only 10 days of TOPEX/Poseidon data (October 3 to October 12, 1992), it reveals most of the current systems that have been identified by shipboard observations collected over the last 100 years.

Ocean surface topography is also used to understand how the ocean moves heat around the globe, a critical component of Earth's climate, and for monitoring changes in global sea level. The sea surface height (SSH) is calculated through altimetry satellites, which determine the distance from the satellite to a target surface by measuring the satellite-to-surface round-trip time of a radar pulse.[2] The satellites then measure the distance between their orbit altitude and the surface of the water. Due to the differing depths of the ocean, an approximation is made. This is called the Arbitrary Reference Surface. Arbitrary Reference Surface is an estimated surface that is calculated to factor in the shape of the Earth. The general shape of the earth is spherical, but flattened out at the North and South Pole. This approximated surface is called the reference ellipsoid. This enables data to be taken precisely due to the uniform surface level. The satellite’s altitude then has to be calculated with respect to the reference ellipsoid. It is calculated using the orbital parameters of the satellite and various positioning instruments. The sea surface height is then the difference between the satellite’s altitude relative to the reference ellipsoid and the altimeter range. The satellite sends microwave pulses to the ocean surface. The travel time of the pulses ascending to the oceans surface and back provides data of the sea surface height. In the image below you can see the measurement system using by the satellite Jason-1.[3]

The collection of the data is useful for the long-term information about the ocean and its currents. According to NASA science this data can also be used to provide understanding of weather, climate, navigation, fisheries management, and offshore operations. Observations made about the data are used to study the oceans tides, circulation, and the amount of heat the ocean contains. These observations can help predict short and long term effects of the weather and the earth’s climate over time.[4]

Currently there are two different satellites calculating the earth ocean topography, Jason-1, and Jason-2. These two satellites are currently both in space orbiting Earth in a tandem rotation. They are approximately 330 kilometers apart.

Ocean surface topography can be derived from ship-going measurements of temperature and salinity at depth. However, since 1992, a series of satellite altimetry missions, beginning with TOPEX/Poseidon and continued with Jason-1 and the Ocean Surface Topography Mission on the Jason-2 satellite have measured sea surface height directly. By combining these measurements with gravity measurements from NASA's Grace mission, scientists can determine sea surface topography to within a few centimeters.

Jason-1 was launched by a Boeing Delta II rocket in California in 2001 and continued measurements initially collected by TOPEX/Poseidon satellite, which orbited from 1992 up until 2006.[5] NASA and CNES, a French space agency, are joint partners in this mission.

The main objectives of the Jason-1 satellite is to collect data on the average ocean circulation around the globe in order to better understand its interaction with the time varying components and the involved mechanisms for initializing ocean models. To monitor the low frequency ocean variability and observe the season cycles and inter-annual variations like El Nino and La Nina, the North Atlantic oscillation, the pacific decadal oscillation, and planetary waves crossing the oceans over a period of months, then they will be modeled over a long period of time due to the precise altimetric observations.[6] It aims to contribute to observations of the mesoscale ocean variability, affecting the whole oceans. This activity is especially intense near western boundary currents. Also monitor the average sea level because it is a large indicator of global warming through the sea level data. Improvement of tide modeling by observing more long period components such as costal interactions, internal waves, and tidal energy dissipation. Finally the satellite data will supply knowledge to support other types of marine meteorology which is the scientific study of the atmosphere.

Jason-2 was launched on June 20, 2008 by a Delta-2 rocket out of the California site in Vandenberg. Its current mission is to transfer the current data into a second decade of data collection on the ocean height. The long-term objectives of the Jason-2 satellite were to provide global descriptions of the seasonal and yearly changes of the circulation and heat storage in the ocean.[7] This includes the study of short-term climatic changes such as El Nino, La Nina. The satellites detect global sea level mean and record the fluctuations. Also detecting the slow change of upper ocean circulation on decadal time scales, every ten years. Studying the transportation of heat and carbon in the ocean and examining the main components that fuel deep water tides. The satellites data collection also helps improve wind speed and height measurements in current time and for long term studies. Lastly improving our knowledge about the marine geoid.[8] The first seven months Jason-2 was put into use it was flown in extreme close proximity to Jason-1. Only being one minute apart from each other the satellites observed the same area of the ocean. The reason for the close proximity in observation was for cross-calibration. This was meant to calculate any bias in the two altimeters. This multiple month observation proved that there was no bias in the data and both collections of data were consistent.[9]

A new satellite mission called the Surface Water Ocean Topography Mission has been proposed to make the first global survey of the topography of all of Earth's surface water—the ocean, lakes and rivers. This study is aimed to provide a comprehensive view of Earth’s freshwater bodies from space and more much detailed measurements of the ocean surface than ever before.[10]