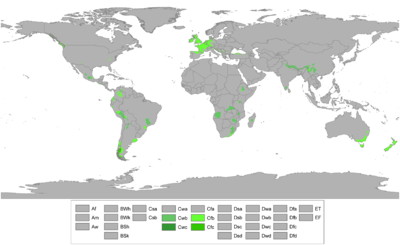 An oceanic climate (also known as marine, west coast and maritime) is the climate typical of west coasts in higher middle latitudes of continents, and generally features cool summers (relative to their latitude) and cool but not cold winters, with a relatively narrow annual temperature range and few extremes of temperature, with the exception for transitional areas to continental, subarctic and highland climates. Oceanic climates are defined as having a monthly mean temperature below 22 °C (72 °F) in the warmest month, and above 0 °C (32 °F) in the coldest month. [1]

It typically lacks a dry season, as precipitation is more evenly dispersed throughout the year. It is the predominant climate type across much of North Western Europe, the Pacific Northwest region of the United States and Canada, portions of southwestern South America and small areas of southeast Australia, and New Zealand as well as isolated locations elsewhere. Oceanic climates generally have cool summers and mild to cool (but not cold) winters. They are characterised by a narrower annual range of temperatures than are encountered in other places at a comparable latitude, and generally do not have the extremely dry summers of Mediterranean climates or the hot summers of humid subtropical.[2] Oceanic climates are most dominant in Europe, where they spread much farther inland than in other continents.[3]

Oceanic climates can have much storm activity as they are located in the belt of the stormy westerlies. Many oceanic climates have frequent cloudy or overcast conditions due to the near constant storms and lows tracking over or near them. The annual range of temperatures is smaller than typical climates at these latitudes due to the constant stable marine air masses that pass through oceanic climates, which lack both very warm and very cool fronts. 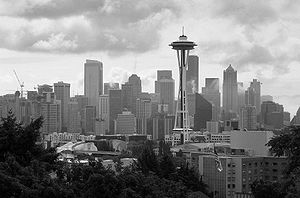 Seattle, a city with an oceanic climate

Precipitation is both adequate and reliable throughout the year in oceanic climates. Extended months of rain and cloudy conditions are common in oceanic climates. Seattle is an example of this. Between October and May, Seattle experiences high rainfall and is mostly or partly cloudy six out of every seven days.[4]

Overall temperature characteristics of the oceanic climates feature cool temperatures and infrequent extremes of temperature. In the Köppen climate classification, Oceanic climates have a mean temperature of −3 °C (27 °F) or higher in the coldest month, compared to continental climates where the coldest month has a mean temperature of below −3 °C (27 °F). Summers are cool, with the warmest month having a mean temperature below 22 °C (72 °F). Poleward of the latter is a zone of the aforementioned subpolar oceanic climate (Köppen Cfc),[5] with long and cold (but not very cold) winters and cool and short summers (average temperatures of at least 10 °C (50 °F) for one to three months). Examples of this climate include parts of coastal Iceland in the Northern Hemisphere and extreme southern Chile and Argentina in the Southern Hemisphere (examples include Ushuaia and Punta Arenas).

Oceanic climates are not necessarily always found in coastal locations on the aforementioned parallels; however, in most cases oceanic climates parallel higher middle latitude oceans. The polar jet stream, which moves in a west to east direction across the middle latitudes, advancing low pressure systems, storms, and fronts. In coastal areas of the higher middle latitudes (45–60° latitude), the prevailing onshore flow creates the basic structure of most oceanic climates. Oceanic climates are a product and reflection of the ocean adjacent to them. In the fall, winter, and early spring, when the polar jet stream is most active, the frequent passing of marine weather systems creates the frequent fogs, cloudy skies, and light drizzle often associated with oceanic climates. In summer, high pressure often pushes the prevailing westerlies north of many oceanic climates, often creating a drier summer climate (for example in the Pacific Northwest of the United States and Canada).

The North Atlantic Gulf Stream, a tropical oceanic current that passes north of the Caribbean and up the East Coast of the United States to North Carolina, then heads east-northeast to the Azores, is thought to greatly modify the climate of Northwest Europe.[6] As a result of the Gulf Stream, west-coast areas located in high latitudes like Ireland, the UK, and Norway have much milder winters (for their latitude) than would otherwise be the case. The lowland attributes of western Europe also help drive marine air masses into continental areas, enabling cities such as Dresden, Prague, and Vienna to have maritime climates in spite of being located well inland from the ocean.

Oceanic climates in Europe occur mostly in Northwest Europe, from Ireland and Great Britain eastward to central Europe. Most of France (away from the Mediterranean), Germany, Norway, the north coast of Spain (Basque Country, north of Navarre, Asturias and Cantabria), the western Azores off the coast of Portugal and southern portions of Sweden, also have oceanic climates. Examples of oceanic climates are found in London, Bergen, Dublin, Berlin, Bilbao, Donostia-San Sebastian, Biarritz, Bayonne, Zürich, Copenhagen and Paris. With decreasing distance to the Mediterranean Sea, the oceanic climate of Northwest Europe gradually changes to the subtropical dry-summer or Mediterranean climate of southern Europe.[10] The line between Oceanic and Continental climate in Europe runs in a generally north to south direction. For example, western Germany is more impacted by milder Atlantic air masses than is eastern Germany. Thus, winters across Europe become colder to the east, and (in some locations) summers become hotter. The line between oceanic Europe and Mediterranean Europe normally runs north to south and is related to changes in precipitation patterns and differences to seasonal temperatures.

The oceanic climate exists in an arc spreading across the north-western coast of North America from the Alaskan panhandle to northern California, in general the coastal areas of the Pacific Northwest. It includes the western parts of Washington and Oregon, the Alaskan panhandle, western portions of British Columbia, and north-western California. In addition, some east coast areas such as some higher elevations along the southern Appalachian Mountains as well as Block Island, Cape Cod, Martha's Vineyard, and Nantucket have a similar climate.[11] A significant portion of oceanic climate exhibited in North America features a drying trend in the summer, thus falling under the dry-summer subcategory explained below.

The oceanic climate is found in isolated pockets in South America. It exists in southeast-central and southwest Argentina, southern Chile and in the highest parts of the states of Santa Catarina, Paraná and São Paulo, in Brazil. Under Köppen-Geiger, many areas generally considered to have Oceanic climates are classified as cool summer, dry-summer subtropical (Csb) climates. These areas are not usually associated with a typical Mediterranean climate, and include much of the Pacific Northwest, southern Chile and parts of southwestern-central Argentina. Many of these areas would be classified as Cfb climates, except dry-summer patterns meet Köppen's Cs thresholds, and cities such as Concepción, Chile; Seattle, Washington; Portland, Oregon; and Victoria, British Columbia can be classified as Csb.

All mid-latitude oceanic climates are classified as humid. However, some rainshadow climates feature thermal régimes similar to those of oceanic climates but with steppe-like (BSk) or even desert-like (BWk) scarcity of precipitation. Despite the oceanic-like thermal regimes, these areas are generally classified as mild steppe or desert climates. This milder version of steppe and desert climates are found in Washington and Oregon to the east of the Cascade Range in the United States, in the Okanagan Valley in British Columbia in Canada, Patagonia in southern Argentina, and the Atacama Desert in northern Chile.

The only noteworthy area of Maritime Climate at or near sea-level within Africa is in South Africa from Mossel Bay on the Western Cape coast to Plettenberg Bay, with additional pockets of this climate inland of the Eastern Cape and KwaZulu-Natal coast. Interior southern Africa and elevated portions of eastern Africa as far north as Mozambique and of western Africa up to the southwestern Angola highlands also share this climate type. It is usually warm most of the year with no pronounced rainy season, but slightly more rain in autumn and spring. The Tristan da Cunha archipelago in the South Atlantic also has an oceanic climate.

The oceanic climate is prevalent in the more southerly locations of Oceania. A mild maritime climate is in existence in New Zealand. In Australia, the island of Tasmania, southeastern New South Wales (starting from the Illawarra region) and the southern parts of Victoria, also exhibit a mild maritime climate. It can also be found along the western areas of the south coast of Western Australia, parts with steppe-like (BSk) or even desert-like (BWk) scarcity of precipitation.

The French overseas territories of Île Amsterdam and Île Saint-Paul are located in the subtropics and have an oceanic climate.

The subtropical highland variety of the oceanic climate exists in elevated portions of the world that are within either the tropics or subtropics, though it is typically found in mountainous locations in some tropical countries. Despite the latitude, the higher altitudes of these regions mean that the climate tends to share characteristics with oceanic climates, though it also tends to experience noticeably drier weather during the lower-sun "winter" season.

In locations outside the tropics, other than the drying trend in the winter, subtropical highland climates tend to be essentially identical to an oceanic climate, with mild summers and noticeably cooler winters, plus, in some instances, some snowfall. In the tropics, a subtropical highland climate tends to feature spring-like weather year-round. Temperatures there remain relatively constant throughout the year and snowfall is seldom seen.

Areas with this climate feature monthly averages below 22 °C (72 °F) but above −3 °C (27 °F) (or 0 °C (32 °F) using American standards). At least one month's average temperature is below 18 °C (64 °F). Without the elevation, many of these regions would likely feature either tropical or humid subtropical climates. These regions usually carry a Cwb or Cfb designation, though very small areas in Yunnan, Sichuan and parts of Argentina and Bolivia have summers sufficiently short to be Cwc with fewer than four months over 10 °C (50 °F).[12] Copacabana, Bolivia, is one town that features this rare variation of the subtropical highland climate.

This type of climate exists in parts of east, south and southeastern Africa, the exposed areas of High Atlas, some mountainous areas across southern Europe, sections of mountainous North (including higher elevations of the Southern Appalachians), Central and South America, some mountainous areas across Southeast Asia, and parts of the Himalayas. It also occurs in a few areas of Australia, namely in the southeast, although average high temperatures during summers there tend to be higher and the summers drier than is typical of subtropical highland climates, with summer maxima sometimes exceeding 40 °C (104 °F).[13]

This variant of an oceanic climate is found in parts of coastal Iceland, the Faroe Islands, small sections of the Scottish Highlands, the Scottish archipelago of Shetland, northwestern coastal areas of Norway such as Lofoten and reaching to 70°N on some islands,[14] uplands near the coast of southwestern Norway, southern islands of Alaska and northern parts of the Alaskan Panhandle, the far south of Chile and Argentina, and a few highland areas of Tasmania, and the Australian and Southern Alps.[15] This type of climate is even found in the very remote parts of the Papuan Highlands in Indonesia. The classification used for this regime is Cfc.[5] In the most marine of those areas affected by this regime, temperatures above 20 °C (68 °F) are extreme weather events, even in the midst of summer. Temperatures above 30 °C (86 °F) have been recorded on rare occasions in some areas of this climate, and in winter temperatures down to −20 °C (−4 °F) have seldom been recorded in some areas.