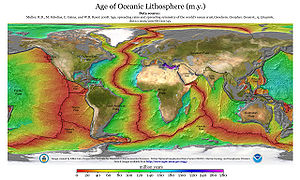 Oceanic crust is the result of erupted mantle material originating from below the plate, cooled and in most instances, modified chemically by seawater. This occurs mostly at mid-ocean ridges, but also at scattered hotspots, and also in rare but powerful occurrences known as flood basalt eruptions. It is primarily composed of mafic rocks, or sima, which is rich in iron and magnesium. It is thinner than continental crust, or sial, generally less than 10 kilometers thick; however it is denser, having a mean density of about 2.9 grams per cubic centimeter[1] as opposed to continental crust which has a density of about 2.7 grams per cubic centimeter.[2]

Although a complete section of oceanic crust has not yet been drilled, geologists have several pieces of evidence that help them understand the ocean floor. Estimations of composition are based on analyses of ophiolites (sections of oceanic crust that are preserved on the continents), comparisons of the seismic structure of the oceanic crust with laboratory determinations of seismic velocities in known rock types, and samples recovered from the ocean floor by submersibles, dredging (especially from ridge crests and fracture zones) and drilling. Oceanic crust is significantly simpler than continental crust and generally can be divided in three layers.

The most voluminous volcanic rocks of the ocean floor are the mid-oceanic ridge basalts, which are derived from low-potassium tholeiitic magmas. These rocks have low concentrations of large ion lithophile elements (LILE), light rare earth elements (LREE), volatile elements and other highly incompatible elements. There can be found basalts enriched with incompatible elements, but they are rare and associated with mid-ocean ridge hot spots such as surroundings of Galapagos Islands, the Azores and Iceland.[4]

Oceanic crust is continuously being created at mid-ocean ridges. As plates diverge at these ridges, magma rises into the upper mantle and crust. As it moves away from the ridge, the lithosphere becomes cooler and denser, and sediment gradually builds on top of it. The youngest oceanic lithosphere is at the oceanic ridges, and it gets progressively older away from the ridges.

As the mantle rises it cools and melts, as the pressure decreases and it crosses the solidus. The amount of melt produced depends only on the temperature of the mantle as it rises. Hence most oceanic crust is the same thickness (7±1 km). Very slow spreading ridges (<1 cm·yr−1 half-rate) produce thinner crust (4–5 km thick) as the mantle has a chance to cool on upwelling and so it crosses the solidus and melts at lesser depth, thereby producing less melt and thinner crust. An example of this is the Gakkel Ridge under the Arctic Ocean. Thicker than average crust is found above plumes as the mantle is hotter and hence it crosses the solidus and melts at a greater depth, creating more melt and a thicker crust. An example of this is Iceland which has crust of thickness ~20 km.[5]

The oldest large scale oceanic crust is in the west Pacific and north-west Atlantic - both are about up to 180-200 million years old. However, parts of the eastern Mediterranean Sea are remnants of the much older Tethys ocean, at about 270 million years old.[7]

The oceanic crust displays an interesting pattern of parallel magnetic lines, parallel to the ocean ridges, frozen in the basalt. In the 1950s, scientists mapped the magnetic field generated by rocks on the ocean floor. They noticed a symmetrical pattern of positive and negative magnetic lines as they moved along the ocean floor, and the line of symmetry was at the mid ocean ridge. That the anomalies were symmetrical at the mid-ocean ridge was explained by the hypothesis that new rock was being formed by magma at the mid-ocean ridges, and the ocean floor was spreading out from this point. When the magma cooled to form rock, it aligned itself with the current position of the north magnetic pole of the Earth (which has reversed many times in its past) at the time of its cooling. New magma forced the older cooled magma away from the ridge. Approximately half of the new rock was formed on one side of the ridge and half on the other.