From Infogalactic: the planetary knowledge core
Jump to: navigation, search
This article is about terrorism in Canada. For other uses, see October Crisis (disambiguation).

The October Crisis (French: La crise d'Octobre) was a crisis that involved the kidnapping and murder of Pierre Laporte, a provincial cabinet minister, and the kidnapping and subsequent release of James Cross, a British diplomat, by members of the Front de libération du Québec (FLQ). The events took place during October 1970 in the province of Quebec, Canada, mainly in the Montreal metropolitan area.

Prime Minister Pierre Trudeau on October 16 invoked the only peacetime use of the War Measures Act in Canada's history. He was supported by the Premier of Quebec, Robert Bourassa, and the Mayor of Montreal, Jean Drapeau. Trudeau deployed Canadian Forces throughout Quebec; they acted in a support role to the civil authorities of Quebec. The police were also enabled with far-reaching powers, and they arrested and detained, without bail, 497 individuals, all but 62 of whom were later released without charges.[1]

At the time, opinion polls throughout Canada, including in Quebec, showed widespread support for the use of the War Measures Act.[2] The response, however, was criticized at the time by prominent politicians such as René Lévesque and Tommy Douglas,[3] who believed the actions to be excessive and the suspension of civil liberties dangerous. The criticism was reinforced by evidence that police officials had abused their powers and detained, without cause, prominent artists and intellectuals associated with the sovereignty movement.[4]

The events of October 1970 galvanized support against the use of violence in efforts to gain Quebec sovereignty and accelerated the movement towards electoral means of attaining greater autonomy and independence,[5] including support for the sovereigntist Parti Québécois, which formed the provincial government in 1976.

From 1963 to 1970 the Quebec nationalist group Front de libération du Québec had detonated over 95 bombs.[6] While mailboxes—particularly in the affluent and predominantly Anglophone city of Westmount—were common targets, the largest single bombing was of the Montreal Stock Exchange on February 13, 1969, which caused extensive damage and injured 27 people. Other targets included Montreal City Hall, Royal Canadian Mounted Police, armed forces recruiting offices, railway tracks, and army installations. FLQ members, in a strategic move, had stolen several tons of dynamite from military and industrial sites, and, financed by bank robberies, they threatened through their official communication organ, known as La Cognée, that more attacks were to come.

By 1970, 23 members of the FLQ were in prison, including four convicted of murder. On February 26, 1970, two men in a panel truck – including Jacques Lanctôt– were arrested in Montreal when they were discovered with a sawed-off shotgun and a communique announcing the kidnapping of the Israeli consul. In June, police raided a home in the small community of Prévost, north of Montreal in the Laurentian Mountains, and found firearms, ammunition, 300 pounds (140 kg) of dynamite, detonators, and the draft of a ransom note to be used in the kidnapping of the United States consul.[7]

For more details on this topic, see Timeline of the FLQ. 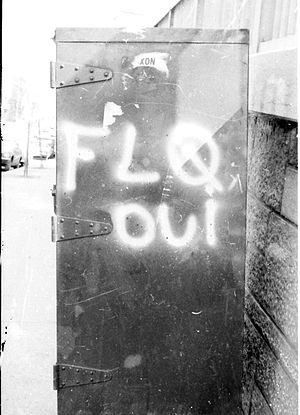 A postal box in Montreal bearing the graffiti FLQ oui (FLQ yes) in July 1971. The FLQ conducted several bombings of post boxes which typically bore a decal of the Royal Coat of Arms of Canada.

When CBC reporter Tim Ralfe asked how far he was willing to go to stop the FLQ, Trudeau replied: "Just watch me". Three days later, on October 16, the Cabinet under his chairmanship advised the Governor General to invoke the War Measures Act at the request of the Premier of Quebec, Robert Bourassa, and the Mayor of Montreal, Jean Drapeau. The provisions took effect at 4:00 a.m., and soon, hundreds of suspected FLQ members and sympathizers were taken into custody. The War Measures Act gave police the power to arrest people without warrant, and 497 people were arrested, including singer Pauline Julien and her partner, future Quebec Minister Gérald Godin, poet Gaston Miron, union activist Michel Chartrand and journalist Nick Auf der Maur.

This act was imposed only after the negotiations with the FLQ had broken off and the Premier of Quebec was facing the next stage in the FLQ's terrorist agenda.[19]

At the time, opinion polls in Quebec and the rest of Canada showed overwhelming support for the War Measures Act;[20][21] in a December 1970 Gallup Poll, it was noted that 89% of English-speaking Canadians supported the introduction of the War Measures Act, and 86% of French-speaking Canadians supported its introduction. They respectively had 6% and 9% disapproving, the difference being undecided.[22] Since then, however, the government's use of the War Measures Act in peacetime has been a subject of debate in Canada as it gave police sweeping powers of arrest and detention.

Simultaneously, under provisions quite separate from the War Measures Act and much more commonly used, the Solicitor-General of Quebec requisitioned the deployment of the military from the Chief of the Defence Staff in accordance with the National Defence Act. Troops from Quebec bases and elsewhere in the country were dispatched, under the direction of the Sûreté du Québec (Quebec's provincial police force), to guard vulnerable points as well as prominent individuals at risk. This freed the police to pursue more proactive tasks in dealing with the crisis.

Outside Quebec, mainly in the Ottawa area, the federal government deployed troops under its own authority to guard federal offices and employees. The combination of the increased powers of arrest granted by the War Measures Act, and the military deployment requisitioned and controlled by the government of Quebec, gave every appearance that martial law had been imposed. A significant difference, however, is that the military remained in a support role to the civil authorities (in this case, Quebec authorities) and never had a judicial role. It still allowed for the criticism of the government and the Parti Québécois was able to go about its everyday business free of any restrictions, including the criticism of the government and the War Measures Act.[19] Nevertheless, the sight of tanks on the lawns of the federal parliament was disconcerting to many Canadians. Moreover, police officials sometimes abused their powers and detained without cause prominent artists and intellectuals associated with the sovereignty movement.[4]

The October Crisis was the only occasion in which the War Measures Act was invoked in peacetime. The FLQ was declared an unlawful association, this meant that under the War Measures Act the police had full power to arrest, interrogate and hold anyone they believed was associated with the FLQ. This meant that "A person who was a member to this group, acted or supported it in some fashion became liable to a jail term not to exceed five years. A person arrested for such a purpose could be held without bail for up to ninety days"[23] It is estimated that within the first 24 hours of the War Measures Act being put in place, police mobilized to arrest suspects of the unlawful organization. The police conducted 3000 searches and 497 people were detained.[24]

Along with this, the War Measures Act violated and limited many human rights of people being incarcerated; for example "Everyone arrested under the War Measures Act was denied due process. Habeas corpus (an individual’s ancient right to have a judge confirm that they have been lawfully detained) was suspended. The Crown could detain a suspect for seven days before charging him or her with a crime. In addition, the attorney general could order, before the seven days expired, that the accused be held for up to 21 days. The prisoners were not permitted to consult legal counsel, and many were held incommunicado."[25]

There were cases, however few, of people having cause to be upset by the method of their interrogation; however, the majority of those interviewed after had little cause to complain and several even commented on the courteous nature of the interrogations and searches.[19] In addition, the Quebec Ombudsman, Louis Marceau, was instructed to hear complaints of detainees, and the Quebec government agreed to pay damages to any person unjustly arrested. On February 3, 1971, John Turner, Minister of Justice of Canada, reported that 497 persons had been arrested under the War Measures Act, of whom 435 had already been released. The other 62 were charged, of which 32 were accused of crimes of such seriousness that a Quebec Superior Court judge refused them bail.

Pierre Laporte was eventually found to have been murdered by his captors while James Cross was freed after 60 days as a result of negotiations with the kidnappers who requested exile to Cuba rather than facing trial in Quebec. The cell members responsible for Laporte's death were arrested and charged with kidnapping and first-degree murder after they returned.

The response by the federal and provincial governments to the incident still sparks controversy. This is the only time that the War Measures Act had been put in place during peacetime in Canada.[26] A few critics (most notably Tommy Douglas and some members of the New Democratic Party[27]) believed that Trudeau was being excessive in advising the use of the War Measures Act to suspend civil liberties and that the precedent set by this incident was dangerous. Federal Progressive Conservative leader Robert Stanfield initially supported Trudeau's actions, but later regretted doing so.[28] The size of the FLQ organization and the number of sympathizers in the public was not known. However, in its Manifesto, the FLQ stated: "In the coming year (Quebec Premier Robert) Bourassa will have to face reality; 100,000 revolutionary workers, armed and organized."[29] Given that declaration, along with seven years of bombings and the wording of their communiques throughout that time that strove to present an image of a powerful organization spread secretly throughout all sectors of society, the authorities took significant action.

Indeed, the events of October 1970 marked a significant loss of support for the violent wing of the Quebec sovereigntist movement that had gained support over nearly ten years,[5] and increased support for political means of attaining independence, including support for the sovereigntist Parti Québécois, which went on to take power at the provincial level in 1976. After the defeat of the Meech Lake Accord, which sought to amend the Constitution of Canada to resolve the passage by a previous government of the Constitution Act 1982 without Quebec's ratification, a pro-independence political party, the Bloc Québécois, was also created at the federal level.

In 1988 the War Measures Act was replaced by the Emergencies Act and the Emergency Preparedness Act.