The Odessa Military District (Russian: Одесский военный округ, ОВО) was a military administrative division of the Imperial Russian military, the Soviet Armed Forces and the Ukrainian Armed Forces and was known under such name from around 1862 to 1998. It was reorganized as part of the Armed Forces of Ukraine and the Military of Moldova in 1992. In 1998 most of its territory was transformed into the Southern Operational Command (Ukraine). 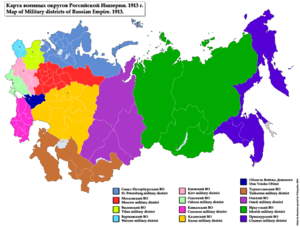 Map of military districts in 1913. OVO is in light navy color on the far-left

The Odessa Military District was established during the reforms of the Russian military minister Dmitry Milyutin. It was the second of two districts on the territory of Ukraine, the other being Kiev Military District. OVO existed from 1862 - 1918 as part of the Imperial Russian Armed Forces. It encompassed the territories of Kherson, Yekaterinoslav, Tauride, Bessarabia guberniyas. The district bordered Kingdom of Romania, Kiev Military District, Don Voisko Oblast, and Black Sea. In the 1870s and 1880s (until August 12, 1889) the Commander of the district served as the interim Governor General of Odessa city concurrently. In January 1918 the Odessa Military District headquarters was transformed into the headquarters of the Soviet Romanian Front under the jurisdiction of Rumcherod. With the establishment of the Ukrainian government on its territory, it was terminated. OVO was reinstated as the Ukrainian forces were pushed out the area in April to August 1919.

The district was reformed by the decision of October 11, 1939 specifically for the occupation of Bessarabia after the Soviet Union signed Molotov-Ribbentrop Pact. At that time its territory included the newly created Moldovian SSR, six oblasts of the Ukrainian SSR (Izmail, Odessa, Dnipropetrovsk, Zaporizhia, Mykolaiv, Kirovohrad) and also the Crimean Autonomous Soviet Socialist Republic as part of the Russian SFSR. The Odessa MD was reinforced by several units from the Ukrainian Front that took part in the Soviet invasion of Poland and Romania, previously formed on base of the Odessa Army Group of the Kiev Special Military District (reformed Kiev Military District).

By directives OV/583 and OV/584 of the Soviet People's Commissariat of Defense, units of the Odessa Military District, currently commanded by Mjr. Gen. I.V. Boldin, were ordered into battle ready state in the spring of 1940. Soviet troop concentrations along the Romanian border took place between April 15 and June 10, 1940. In order to coordinate the efforts of the Kiev and Odessa military districts in the preparation of action against Romania, the Soviet Army created the Southern Front under General Georgy Zhukov, composed of the 5th, 9th and 12th Armies. The Southern Front had 32 infantry divisions, 2 motorized infantry divisions, 6 cavalry divisions, 11 tank brigades, 3 paratrooper brigades, 30 artillery regiments, and smaller auxiliary units.

Two action plans were devised. The first plan was prepared for the case that Romania would not accept to evacuate Bessarabia and Bukovina. The Soviet 12th Army was supposed in such a situation to strike Southward along the Prut river towards Iaşi, while Soviet 9th Army was supposed to strike East-to-West south of Chişinău towards Huşi. The target of this plan was to surround the Romanian troops in the Bălţi-Iaşi area. The second plan took into consideration the case that Romania would succumb to Soviet demands and would evacuate its military. In such a situation, Soviet troops were given the mission to reach quickly the Prut river, and take charge of the evacuation process of the Romanian troops. The first plan was taken as the basis of action. Along the portions where the offensive was supposed to take place, Soviets prepared to have at least a triple superiority of men and means.

In August 1941 51st Independent Army was formed in the Crimea.

On September 10, 1941 the district was abolished as it was overran by the Armed Forces of Nazi Germany and its allies. 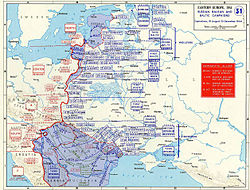 From September 1984 the District came under command of the South-Western Strategic Direction, with its headquarters at Kishinev.[6]

In the Odessa District's territory were additionally deployed the 14th Guards Army (created on the basis of 10th Guards Rifle Corps), the 32nd Army Corps (possibly reformed on the basis of the headquarters units of the former Tauric Military District) in 1956,[7] complemented by the 98th Guards Airborne Division as well as seven additional motor rifle divisions.

The 5th Air Army of the Soviet Air Forces provided tactical air support for the District's units and the 49th Air Defence Corps, 8th Air Defence Army was tasked with national air defence for the territory.

The Odessa Military District was transferred to the jurisdiction of Ukraine after the dissolution of the Soviet Union on January 3, 1992 at 18:00.[citation needed] William E. Odom says that 'in accordance with the Minsk agreements [from the CIS summit in Minsk of 30–31 December 1991], Shaposhnikov sent an order on 3 January 1992, formally transferring conventional forces to Ukraine. President Kravchuk then approved the firing of the three military district commanders (..). On 7–8 January each were removed, none resisting because within their headquarters Kravchuk's people had quietly created a network of officers loyal to his government.'[8]

Around 1988, the District contained the following forces:[10]

Following the dissolution of the Soviet Union the 14th Guards Army became entangled in the later War of Transnistria (see 14th Army involvement in Transnistria). The 98th Guards Airborne Division was split between Russia and Ukraine; the Ukrainian half became the 1st Airmobile Division and the Russian part was withdrawn to Ivanovo in the Moscow Military District and became part of the Russian Airborne Troops.

The 5th Air Army was later redesignated the 5th Aviation Corps of the Ukrainian Air Force, while over the northern border, the Army was reformed in Russia's Volga-Urals Military District in 2001.

Colonel General Vladimir Shkidchenko commanded the Odessa Military District from December 1993 until it became the Southern Operational Command in February 1998. Since January 3, 1998 the Odessa Military District was transformed into the Southern Operational Command of the Ukrainian Ground Forces according to the Decree of Ministry of Defense of Ukraine from July 1, 1997.[citation needed] The command encompasses nine oblasts: Odessa, Mykolaiv, Kherson, Dnipropetrovsk, Zaporizhia, Donetsk, Luhansk, Kirovohrad, Kharkiv, and the autonomous republic of Crimea.