Odessa Oblast (also spelled Odesa Oblast; Ukrainian: Одеська область, Odes’ka oblast’; also Odeshchyna (Одещина)) is an oblast or province of southwestern Ukraine located along the northern coast of the Black Sea. Its administrative center is the city of Odessa.

Evidence of the earliest inhabitants in this area comes from the settlements and burial grounds of the Neolithic Gumelniţa, Cucuteni-Trypillian and Usatovo cultures, as well as from the tumuli and hoards of the Bronze Age Proto-Indo-Europeans. In the 1st millennium B.C. the Milesian Greeks founded colonies along the northern coast of the Black Sea, including the towns of Olbia, Tyras, Niconium, Panticapaeum, and Chersonesus. The Greeks left behind painted vessels, ceramics, sculptures, inscriptions, arts and crafts that indicate the prosperity of their ancient civilisation.

The culture of Scythian tribes inhabiting the Black Sea littoral steppes in the first millennium B.C. is represented by finds from settlements and burial grounds, including weapons, bronze cauldrons, other utensils, and adornments. By the beginning of the 1st millennium A.D. the Sarmatians displaced the Scythians. In the 3rd–4th centuries A.D. a tribal alliance, represented by the items of Chernyakhov culture, developed. From the middle of the first millennium the formation of the Slavic people began. In the 9th century the Slavs became united into a state with Kiev as its centre. The Khazars, Polovtsy and Pechenegs were the Slavs' neighbours during different times. Archeological evidence of the period of the 9th–14th centuries survives in materials from the settlements and cities of Kievan Rus': Belgorod, Caffa-Theodosia, and Berezan Island.

In 1593 the Ottoman Empire set up in the area what became known as its Dnieper Province (Özü Eyalet), unofficially known as the Khanate of Ukraine.[3] Russian historiography refers to it as the Ochakov Oblast.[4] The territory of the Odessa oblast passed to Russia in 1791 in the course of the Russian southern expansion towards the Black Sea at the end of 18th century. Subsequently the Russians colonized the area intensively, establishing new cities and ports. In less than a hundred years the city of Odessa grew from a small fortress to the biggest metropolis of New Russia.

After the February Revolution of 1917 in Russia the area became part of the Ukrainian People's Republic (1917-1918), but soon succumbed first to the Russian Volunteer Army (part of the White movement and then to the Russian Bolshevik Red Army. By 1920 the Soviet authorities had secured the territory of Odessa Oblast, which became part of the Ukrainian SSR. The oblast was established on 27 February 1932 from five districts:

In 1937 eastern portions of the Odessa Oblast were split to create the Mykolaiv Oblast.[citation needed]

Odessa Oblast was enlarged in July 1940 as a result of the 28th of June 1940 Soviet Ultimatum sent to the Kingdom of Romania and the 40 hours latter invasion of Bessarabia. Northern and Southern parts of Bessarabia were given to Ukrainian Soviet Socialist Republic.[citation needed]

During World War II Romania occupied the oblast and administered it as part of the Transnistria Province (1941-1944). After the war the Soviet administration reestablished the oblast with its pre-war borders. Odessa Oblast expanded in 1954 to absorb Izmail Oblast (formerly known as the Budjak region of Bessarabia).

During the 1991 referendum, 85.38% of votes in Odessa Oblast were in favor of the Declaration of Independence of Ukraine. A survey conducted in December 2014 by the Kyiv International Institute of Sociology found 2.3% of the oblast's population supported their region joining Russia, 91.5% did not support the idea, and the rest were undecided or did not respond.[5] A poll by Alexei Navalny found similar results.[6]

The country's largest oblast by area, it occupies an area of around 33,300 square kilometres (12,900 sq mi). It is characterised by largely flat steppes divided by the estuary of the Dniester river. Its Black Sea coast comprises numerous sandy beaches, estuaries and lagoons. The region's soils are renowned for their fertility, and intensive agriculture is the mainstay of the local economy. The southwest possesses many orchards and vineyards, while arable crops are grown throughout the region. 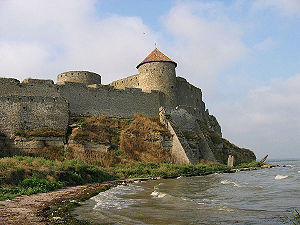 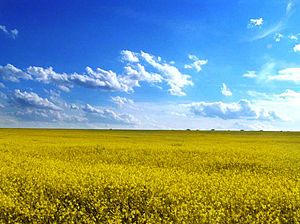 Significant branches of the oblast's economy are:

The region's industrial capability is principally concentrated in and around Odessa.

Significant Bulgarian (6.1%) and Romanian (5.0%) minorities reside in the province.[7] It has the highest proportion of Jews of any oblast in Ukraine (although smaller than the Autonomous City of Kiev) and there is a small Greek community in the city of Odessa.

Bulgarians and Moldovans/Romanians represent 21% and 13% respectively, of the population in the salient of Budjak, within Odessa oblast.

The Odessa Oblast is administratively subdivided into 26 raions (districts) and 7 municipalities which are directly subordinate to the oblast government - (Bilhorod-Dnistrovskyi and Illichivsk), (Izmail, Kotovsk, Teplodar, Yuzhne and the administrative center of the oblast, Odessa). 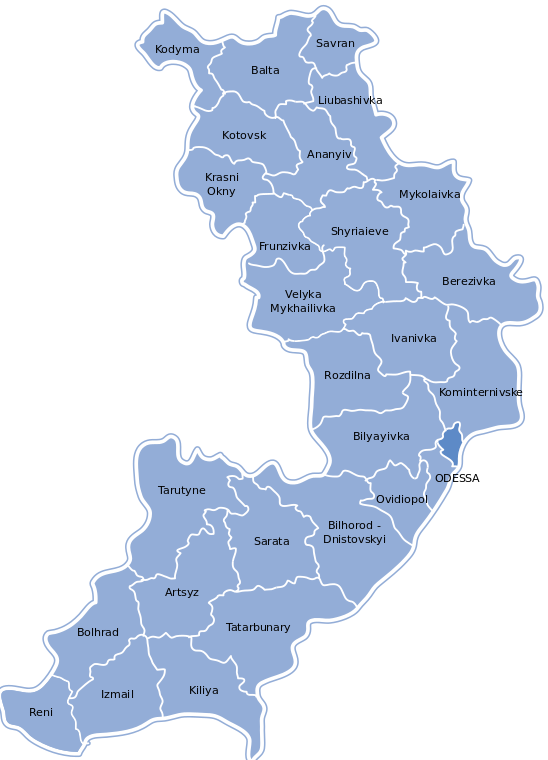 Most of Ukraine's oblasts are named after their capital cities, officially referred to as "oblast centers" (Ukrainian: обласний центр, translit. oblasnyi tsentr). The name of each oblast is a relative adjective, formed by adding a feminine suffix to the name of respective center city: Odessa is the center of the Odes’ka oblast’ (Odessa Oblast). Most oblasts are also sometimes referred to in a feminine noun form, following the convention of traditional regional place names, ending with the suffix "-shchyna", as is the case with the Odessa Oblast, Odeshchyna. In Romanian, it is known as Regiunea Odesa, and in Greek, as Οδησσός.