In late August and early September 2014, rebels supporting the Donetsk People's Republic advanced on the government-controlled city of Mariupol in southern Donetsk Oblast, Ukraine. This followed a wide offensive by DPR/Novorossiya forces, which led to their capture of Novoazovsk to the east. Fighting reached the outskirts of Mariupol on 6 September.

The offensive against Mariupol[10] began on 28 August 2014, when rebel forces captured the town of Novoazovsk and marched towards Mariupol. The Ukrainian soldiers that left Novoazovsk retreated to Mariupol. Many citizens left Mariupol due to fear of an attack.

On 4 September, Ukrainian forces engaged rebels, who came from the village of Bezimenne, between the villages of Shirokino and Berdyanske.[11] One rebel tank and a truck were destroyed, while another separatist truck was left abandoned.[7][12]

On 5 September, fighting primarily raged in the village of Shirokino, while clashes once again took place at Bezimenne. The clashes over the previous two days had left seven civilians dead.[9] Also, the Azov battalion started to train Mariupol citizens in self-defense and organize popular militias to defend the city.[13] About a dozen of Ukrainian army APCs arrived with men and ammo to help the defense battalions to defend the city. More heavy fighting was reported in Mariupol despite the ceasefire agreement. Ukrainian forces shelled rebel positions near Mariupol, and claimed to have repelled an attack. Rebel forces claimed they entered Mariupol, which Ukraine denied.[14]

Fighting in the outskirts

On 6 September, seven Ukrainian Army T-64 tanks faced in battle with 30 advancing rebel tanks, allegedly T-80s supplied by Russia. The Ukrainians repelled the attack but lost four tanks and retreated with the three remaining tanks to the Army checkpoint on the outskirts of Mariupol. The commander of the Ukrainian tank brigade was in a state of post-shock but the three surviving tanks were reloaded with ammunition so they could return to the battlefield.[15]

On 7 September, DPR artillery fire destroyed a Ukrainian military truck at a checkpoint on the outskirts of the town. A civilian was also killed in the shelling.[6] The Azov Battalion also captured a tank near Mariupol, while the crew escaped.[8] The same day, it was confirmed DPR forces had captured Shirokino.[16]

On 8 September, Ukrainian President Petro Poroshenko visited Mariupol, telling steelworkers that Ukrainian forces had secured the city with tanks, howitzers, anti-tanks guns and other weapons should the rebels violate the ceasefire. He also promised a "crushing defeat" on the rebels if they advanced on the city.[17] 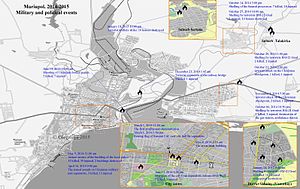 On October 23, 2014, prime minister of the DPR Alexander Zakharchenko vowed to retake Mariupol, Slovyansk, and Kramatorsk. In his statement, he said "Periods of intense hostilities will follow. We will retake Slaviansk, Kramatorsk and Mariupol. Unfortunately, it was impossible to make peaceful settlement the focus of negotiations. We are the only ones who comply with the regime of silence."[18]

On October 29, 2014, Mariupol city authorities said that Ukrainian positions in the village of Talakivka came under Grad and rocket fire from rebel forces.[19]