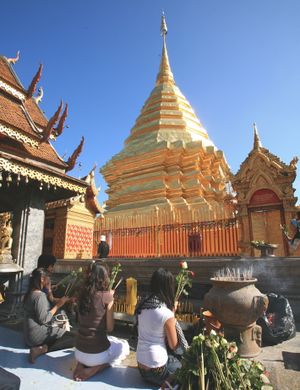 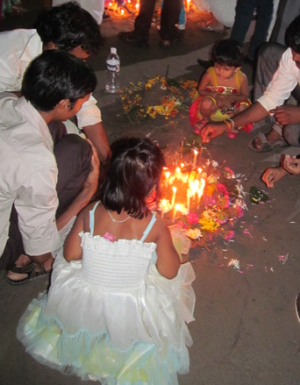 An offering at Chaitya Bhoomi.

In Buddhism, symbolic offerings are made to the Triple Gem, giving rise to contemplative gratitude and inspiration.[1] Typical material offerings involve simple objects such as a lit candle or oil lamp,[2] burning incense,[3] flowers,[4] food, fruit, water or drinks.[5]

Contemporary Western practitioners often find the making of offerings to be occasions for gracious mindfulness.[6] Within the traditional Buddhist framework of karma and rebirth, offerings also lead to:

These offerings often act as preparation for meditation.[8]

Material offerings nurture generosity (Pali:dāna) and virtue (Pali: sīla).[9] The act further honors the Triple Gem (the Buddha, Dhamma and Sangha), deepening one's commitment to the Buddha's path. For instance, traditional chants (in English and Pali) when offering lit candles (padīpa pūjā) and incense (sugandha pūjā) to an image of the Buddha are:

By contemplating on an offering, one tangibly sees life's impermanence (Pali: anicca), one of the three characteristics of all things upon which the Buddha encouraged his disciplines to recollect. For instance, the end of a traditional chant (in English and Pali) when offering flowers (puppha pūjā) to an image of the Buddha is: 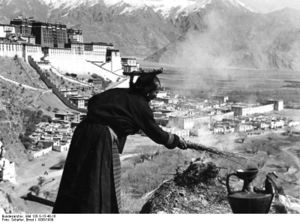 Burning of incense before the Potala, 1939

Mahayana material offerings might be imbued with the following symbology:

In Northern Buddhism, sacred images have set before them:

In some traditions, two different types of offerings are identified:

In this context, material offerings are considered external offerings of "words and deeds."[15]

Practice offerings may be manifested by practicing:

In the Pali Canon, the Buddha declared practice offerings as "the best way of honoring the Buddha"[20] and as the "supreme" offering.[15] This is primarily an internal offering for mental development (Pali: citta, bhāvanā and samādhi).