From 2003 to 2013 the district included the heavily African-American part of Ohio's capital city, Columbus, Ohio along with its northern suburbs, including Westerville, Ohio.

Historically it has been a safe seat for the GOP. Since 1920, it has been held by the GOP except for an eight-year stretch in the 1930s and a two-year term in 1980 where the Democratic Party held the seat; in both instances the Democratic incumbent was later defeated by a GOP politician. However, in the 2004 presidential election George W. Bush narrowly won the district against John Kerry, 51% to 49%.[2] In the 2008 presidential election, Democratic candidate Barack Obama won the 12th district by a margin of 53% to 46%. 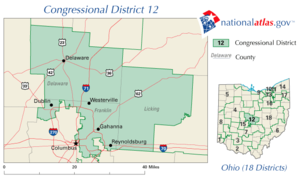