This district became obsolete for the 113th Congress in 2013 as congressional district lines were redrawn to accommodate the loss of the seat as a result of the 2010 Census. Most of the territory within the current 17th district has been merged into the Akron-based 13th district. 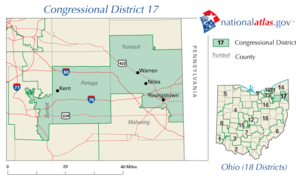