From Infogalactic: the planetary knowledge core
Jump to: navigation, search
This article is about a river in western Russia. For the river in Siberia with the same name, see Oka River (Siberia). For other uses, see Oka.

Oka (Russian: Ока́, IPA: [ɐˈka]) is a river in central Russia, the largest right tributary of the Volga. It flows through the regions of Oryol, Tula, Kaluga, Moscow, Ryazan, Vladimir, and Nizhny Novgorod and is navigable over a large part of its total length, as far upstream as to the town of Kaluga. Its length exceeds 1,500 kilometres (930 mi). The Russian capital Moscow sits on one of the Oka's tributaries—the Moskva River. 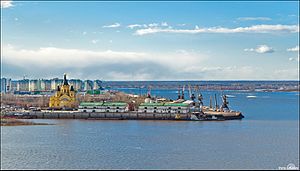 The confluence of the Oka with the Volga in Nizhny Novgorod.

Max Vasmer connects the name of the river to the Gothic аƕа, Old High German aha, Latin aqua, which all mean either "water" or "river" (cf. Aa River).[1] Oleg Trubachev traces the origin of the name to the Baltic languages[citation needed]: the Baltic tribe of Galindians lived in the western part of the Oka basin prior to the arrival of the Slavs.

Historically, the river gave its name to the Upper Oka Principalities, situated upstream from Tarusa. In 1221 Grand Duke Yuri II of Vladimir founded Nizhny Novgorod, later to become one of the largest Russian cities, to protect the Oka's confluence with the Volga. The Qasim Khanate, a Muslim polity, occupied the middle reaches of the Oka (around the city of Kasimov) in the 15th and 16th centuries.[citation needed]

Before the construction of the railways in the mid-19th century and the building of the Moscow Canal in the 1930s, the Oka, along with its tributary Moskva, served as an important transportation route connecting Moscow with the Volga River. Due to the Oka's and Moskva's meandering courses, travel was not particularly fast: for example, it took Cornelis de Bruijn around 10 days to sail from Moscow down these two rivers to Nizhny Novgorod in 1703.[2] Traveling upstream may have been even slower, as the boats had to be pulled by burlaks.[3] 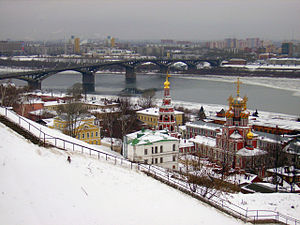 The Oka riverbank in Nizhny Novgorod.

The banks of the river are dotted with historical and cultural sites, including the medieval monasteries of Murom, the mosques and minarets of Kasimov, the fortified kremlins of Kolomna and Serpukhov, the memorial houses of Vasily Polenov and Sergey Yesenin, the excavated ruins of Old Ryazan, and the Oka Shukhov Tower.

The Prioksko-Terrasny Biosphere Reserve lies along the left bank of the river opposite the town of Pushchino and is known for its wisent breeding nursery.[citation needed]

Cities and towns on the Oka 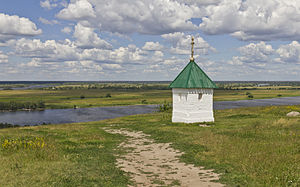 The Oka River in Ryazan Oblast, near Rybnoe.

The River appears as the title and main theme in a popular, nostalgia filled song (in which it is compared to the Vistula river in Poland) of the Polish 1st Tadeusz Kościuszko Infantry Division which was formed nearby in 1943. The unit fought all the way to Berlin alongside the Red Army. It was written by Leon Pasternak.