Okruhas of the Ukrainian SSR

From Infogalactic: the planetary knowledge core
Jump to: navigation, search
Not to be confused with Okrugs of the Ukrainian SSR.

Okruha (Ukrainian: Окру́га) refers to the historical administrative divisions of the Ukrainian Soviet Socialist Republic that existed between 1923 and 1930. The system was intended as a transitional system between the Russian Imperial division of governorates and the modern equivalent of oblasts.

As a literal translation, the word "okruha" means vicinity or neighborhood. This level of subdivision is roughly equivalent to that of a county, parish, or borough. Okruhas were first established in 1918 when the Polissya Okruha and Taurida Okruha were created as temporary territories of the Ukrainian State during the Russian Revolution.

First okruhas, created just before[clarification needed] 1918, were Polissya Okruha centered in Mozyr and Taurida Okruha centered in Berdyansk. Okruhas were first introduced on a widespread scale on April 12, 1923 at the 2nd session of the Central Executive Committee of Ukraine which accepted the declaration "About the administrative-territorial division of Ukraine". According to the declaration, the Ukrainian SSR was divided into 53 okruhas that included 706 raions, thus replacing the imperial division consisting of 102 povits (counties) that included 1989 volosts. 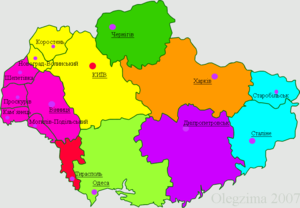 First oblasts of Ukraine at the end of 1932 including recently created Donetsk and Chernihiv oblasts.

Likewise, the Presidium of Central Executive Committee of Ukraine generally approved the principle and order in the organization of local and central authorities. The Presidium requested that the commission and the Council of Commissars of the Ukrainian SSR, on the basis of the approved principles, develop a draft resolution on the liquidation of okruhas and the structure of authorities, both local and central, in connection with the transition to the rayon system.[6]