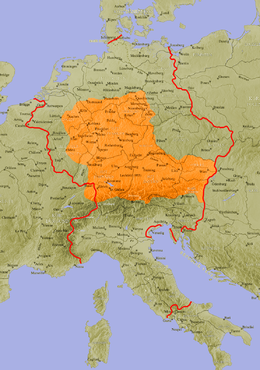 The (Late Old High) German speaking area of the Holy Roman Empire around 950.

Old High German (OHG, German: Althochdeutsch, German abbr. Ahd.) is the earliest stage of the German language, conventionally covering the period from around 700 to 1050 AD. Coherent written texts do not appear until the second half of the 8th century, and some treat the period before 750 as "prehistoric" and date the start of Old High German proper to 750 for this reason. There are, however, a number of Elder Futhark inscriptions dating to the 6th century (notably the Pforzen buckle), as well as single words and many names found in Latin texts predating the 8th century.

The main difference between Old High German and the West Germanic dialects from which it developed is that it underwent the Second Sound Shift or High German consonant shift. This is generally dated approximately to the late 5th and early 6th centuries—hence dating its start to around 500 AD. The result of this sound change is that the consonantal system of German remains different from all other West Germanic languages, including English and Low German. Grammatically, however, Old High German remained very similar to Old English, Old Dutch, and Old Saxon.

By the mid 11th century the many different vowels found in unstressed syllables had all been reduced to "e". Since these vowels were part of the grammatical endings in the nouns and verbs, their loss led to radical simplification of the inflectional grammar of German. For these reasons, 1050 is seen as the start of the Middle High German period, though in fact there are almost no texts in German for the next hundred years.

There was no standard or supra-regional variety of Old High German—every text is written in a particular dialect, or in some cases a mixture of dialects. Broadly speaking, the main dialect divisions of Old High German seem to have been similar to those of later periods—they are based on established territorial groupings and the effects of the Second Sound Shift, which have remained influential until the present day. But because the direct evidence for Old High German consists solely of manuscripts produced in a few major ecclesiastical centres, there is no isogloss information of the sort on which modern dialect maps are based. For this reason the dialects may be termed monastery dialects.

The main dialects, with their bishoprics and monasteries:

There are some important differences between the geographical spread of the Old High German dialects and that of Modern German:

The charts show the vowel and consonant systems of the East Franconian dialect in the 9th century. This is the dialect of the monastery of Fulda, and specifically of the Old High German Tatian. Dictionaries and grammars of OHG often use the spellings of the Tatian as a substitute for genuine standardised spellings, and these have the advantage of being recognizably close to the Middle High German forms of words, particularly with respect to the consonants.

Here are enumerated the sound changes that transformed Common West Germanic into Old High German, not including the Late OHG changes which effected Middle High German

The following is a sample conjugation of a strong verb, nëman "to take".

The Franks conquered Northern Gaul as far south as the Loire; the linguistic boundary later stabilised approximately along the course of the Maas and Moselle, with Frankish speakers further west being romanised.

With Charlemagne's conquest of the Lombards in 776, nearly all continental Germanic speaking peoples had been incorporated into the Frankish Empire, thus also bringing all continental West Germanic speakers under Frankish rule. However, since the language of both the administration and the Church was Latin, this unification did not lead to any development of a supra-regional variety of Frankish nor a standardized Old High German.

Old High German literacy is a product of the monasteries, notably at St. Gallen, Reichenau and Fulda. Its origins lie in the establishment of the German church by Boniface in the mid 8th century, and it was further encouraged during the Carolingian Renaissance in the 9th. The dedication to the preservation of Old High German epic poetry among the scholars of the Carolingian Renaissance was significantly greater than could be suspected from the meagre survivals we have today (less than 200 lines in total between the Lay of Hildebrand and the Muspilli). Einhard tells how Charlemagne himself ordered that the epic lays should be collected for posterity.[3] It was the neglect or religious zeal of later generations that led to the loss of these records. Thus, it was Charlemagne's weak successor, Louis the Pious, who destroyed his father's collection of epic poetry on account of its pagan content.[4]

Hrabanus Maurus, a student of Alcuin's and abbot at Fulda from 822, was an important advocate of the cultivation of German literacy. Among his students were Walafrid Strabo and Otfrid of Weissenburg. Notker Labeo (d. 1022) towards the end of the Old High German period was among the greatest stylists in the language, and developed a systematic orthography.[5]

The early part of the period saw considerable missionary activity, and by 800 the whole of the Frankish Empire had, in principle, been Christianized. All the manuscripts which contain Old High German texts were written in ecclesiastical scriptoria by scribes whose main task was writing in Latin rather than German. Consequently, the majority of Old High German texts are religious in nature and show strong influence of ecclesiastical Latin on the vocabulary. In fact, most surviving prose texts are translations of Latin originals. Even secular works such as the Hildebrandslied are often preserved only because they were written on spare sheets in religious codices.

The earliest Old High German text is generally taken to be the Abrogans, a Latin-Old High German glossary variously dated between 750 and 780, probably from Reichenau. The 8th century Merseburg Incantations are the only remnant of pre-Christian German literature. The earliest texts not dependent on Latin originals would seem to be the Hildebrandslied and the Wessobrunn Prayer, both recorded in manuscripts of the early 9th century, though the texts are assumed to derive from earlier copies.

The Bavarian Muspilli is the sole survivor of what must have been a vast oral tradition. Other important works are the Evangelienbuch (Gospel harmony) of Otfrid von Weissenburg, the short but splendid Ludwigslied and the 9th century Georgslied. The boundary to Early Middle High German (from ca. 1050) is not clear-cut.

The Lord's Prayer is given in four Old High German dialects below. Because these are translations of a liturgical text, they are best not regarded as examples of idiomatic language, but they do show dialect variation very clearly.