Staraya Ladoga (Russian: Ста́рая Ла́дога); Finnish: Vanha Laatokka or the Aldeigjuborg of Norse sagas, is a rural locality (a selo) in Volkhovsky District of Leningrad Oblast, Russia, located on the Volkhov River near Lake Ladoga, 8 kilometers (5.0 mi) north of the town of Volkhov, the administrative center of the district.

It used to be a prosperous trading outpost in the 8th and 9th centuries. A multi-ethnic settlement, it was dominated by Scandinavians who were called by the name of Rus'. For that reason, it is sometimes called the first capital of Russia. 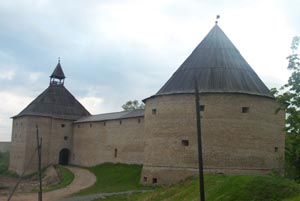 The fortress of Ladoga was built in the 12th century and rebuilt 400 years later. It is now mostly reconstructed since being heavily damaged during World War II.

Dendrochronology suggests that Ladoga was founded in 753.[4] Until 950, it was one of the most important trading ports of Eastern Europe. Merchant vessels sailed from the Baltic Sea through Ladoga to Novgorod and then to Constantinople or the Caspian Sea. This route is known as the trade route from the Varangians to the Greeks. An alternative way led down the Volga River along the Volga trade route to the Khazar capital of Atil, and then to the southern shores of the Caspian Sea, all the way to Baghdad. Tellingly, the oldest Arabian Middle Age coin in Europe was unearthed in Ladoga.

The original inhabitants were Norsemen, Finns, and Slavs. The original Finnish name, Alode-joki (i.e., "lowland river"), was rendered as "Aldeigja" in Norse language and as "Ladoga" in Old East Slavic.

Ladoga under Rurik and Rurikids

According to the Hypatian Codex, the legendary Varangian leader Rurik arrived at Ladoga in 862 and made it his capital. Rurik's successors later moved to Novgorod and then to Kiev, thus laying foundations for the powerful state of Kievan Rus'. There are several huge kurgans, or royal funerary barrows, at the outskirts of Ladoga. One of them is said to be Rurik's grave, and another one—that of his successor Oleg. The Heimskringla and other Norse sources mention that in the late 990s Erik Haakonsson of Norway raided the coast and set the town ablaze. Ladoga was the most important trading center in Eastern Europe from about 800 to 900 CE, and it is estimated that between 90% to 95% of all Arab dirhams found in Sweden passed through Ladoga.

Ladoga's next mention in chronicles is dated 1019, when Ingigerd of Sweden married Yaroslav of Novgorod. Under the terms of their marriage settlement, Yaroslav ceded Ladoga to his wife, who appointed her father's cousin, the Swedish earl Ragnvald Ulfsson, to rule the town. This information is confirmed by sagas and archaeological evidence, which suggests that Ladoga gradually evolved into a primarily Varangian settlement. At least two Swedish kings spent their youths in Ladoga, king Stenkil and Inge I, and possibly also king Anund Gårdske.

In the 12th and 13th centuries, Ladoga functioned as a trade outpost of the powerful Novgorod Republic. Later its trade significance declined and most of the population engaged in fishing in the 15th century.[6] After new fortresses such as Oreshek and Korela were constructed in the 14th century further to the west of Ladoga, the town's military significance also decreased. Ladoga belonged to the Vodskaya pyatina of the Republic and contained eighty-four homesteads in the 15th century; most of the land belonged to the church.[6] The Novgorodians built there a citadel with five towers and several churches. The reconstruction of part Staraya Ladoga's fortress was scheduled to be completed in 2010.[7]

The fortress was rebuilt at the turn of the 15th and 16th centuries, while the mid-12th-century churches of St. George and of Mary's Assumption stand in all their original glory. Inside St. George's, some magnificent 12th-century frescoes are still visible.

In 1703, Peter the Great founded the town of Novaya Ladoga (New Ladoga) closer to the bank of Lake Ladoga. The ancient fortress thenceforth declined and came to be known as Staraya Ladoga (Old Ladoga), in order to distinguish it from the new town.

The heart of Staraya Ladoga is an old fortress where the Yelena River flows into the Volkhov. In earlier times, it was a strategic site because it was the only possible harbor for sea-vessels that could not navigate through the Volkhov River. Apart from the churches mentioned above, there is a mid-12th-century church of St. Climent, which stands in ruins. There is also a monastery, dedicated to St. Nicholas and constructed mainly in the 17th century.

Staraya Ladoga's barrows, architectural monuments, and romantic views of the Volkhov River have always been drawing attention of Russian painters. There were the artists Ivan Aivazovsky, Orest Kiprensky, Aleksander Orłowski, Ivan Ivanov, Alexey Venetsianov and many others in the 19th century.[8] A future member of the Imperial Academy of Arts and the Peredvizhniki group Vassily Maximov was born and laid to rest there. He portrayed scenes from an everyday life of peasants.

Nicholas Roerich painted his studies there during the summer of 1899. He named this landscape the best of the Russian one.[9] Valentin Serov, Konstantin Korovin, Boris Kustodiev also worked there. Alexander Samokhvalov was in Staraya Ladoga many times in 1924-1926. He took part in the restoration of the St. George's Church.[10] That experience gave a great deal to the artist, he wrote. It helped him to understand the effect of joining a monumental painting with the architectural forms.[11] In result of this dwelling in that place painter made his "Staraya Ladoga" (1924) and "Family of Fisherman"(1926, Russian Museum)[12]

In the February of 1945 the ex-estate of the prince Shakhovskoy was given to Leningrad artists as a base zone for the rest and creative work.[13] The restoring works continued 15 years from 1946.[14] But Leningrad artists began to arrive to Staraya Ladoga from 1940s. It became a source of inspiration for Sergei Osipov, Gleb Savinov, Nikolai Timkov, Arseny Semionov and many others for many years.[15]

In 1970-1980 a House of Creativity was widening, the new buildings were built. They used it a whole-year. A dwelling there for 1–2 months was without any payment for them. All commitments on habitation, feed and journeys took the Art Foundation of Russian Soviet Federative Socialist Republic.[9] The paintings created there were exposed in the first-rate art exhibitions.[17][18][19] It completed the collections of the main museums of Soviet Union and numerous private collections of Russia and abroad. Also it became a base of an extensive found of painting, graphics and sculpture of the museum “Staraya Ladoga”.[20]

Financing of the House of Creativity stopped at the beginning of the 1990s on the breakup of the USSR and after the liquidation of the Art Foundation. It stopped to receive the artists and was closed.