From Infogalactic: the planetary knowledge core
Jump to: navigation, search
This name uses Eastern Slavic naming customs; the patronymic is Konstantinovich and the family name is Antonov.
File:Olegantonov.jpg
Oleg Antonov in the 1970s.

Oleg Konstantinovich Antonov (Russian: Оле́г Константи́нович Анто́нов; 7 February 1906 – 4 April 1984) was a prominent Soviet aircraft designer, and the first chief of the Antonov - a world-famous aircraft company in Ukraine, later named in his honour.

Antonov was personally responsible for designing a number of very successful Soviet airplanes (such as the Antonov An-12) and gliders for both civilian and military use.

Antonov was born on 7 February 1906 in Troitsy (now Podolsky District of the Moscow Oblast), Russian Empire. In 1912, the Antonovs moved to Saratov, where he attended the non-classical secondary school (now gymnasium №1) and secondary school (now school №23). From an early age, Antonov was fascinated with aviation and spent much of his spare time at the local airfield.

At the age of 17, Antonov founded the "Amateur Aviation Club" and later joined the "Organization of Friends of the Air Force". Later he designed the OKA-1 "Pigeon", a glider that was entered in a competition in Moscow where he won the first prize, a flight on a Junkers 12 aircraft.[1]

In 1930, Antonov graduated from the Kalinin Polytechnical Institute in Leningrad. He continued to design gliders and in 1931 Antonov became the chief designer at the Moscow Glider Factory. During the next eight years, he designed 30 different gliders including the Standard-1, Standard-2, OKA-6 and the large "City of Lenin" glider. Due to a requirement that all pilots in the Soviet Union had to begin their flight training on gliders, Antonov was able to produce up to 8,000 gliders per year.[1]

In 1938, after an incident when an instructor defected to the West using a glider, the Soviet Stalinist government reversed its decision regarding glider training, banned the sport of gliding and shut down the Moscow Glider Factory.

Following the closure of the glider factory, Antonov was appointed the Chief Designer for the Yakovlev Design Bureau. In 1940 a new aircraft design bureau under his own management was established in Leningrad.[1]

During World War II, Antonov designed the A-7 military glider used for airbridge supply of the Soviet partisans behind the front lines, and the KT "Kryl'ja Tanka" ("Tank Wings") biplane glider that was designed to airlift tanks. In 1943, Antonov returned to Yakovlev’s design bureau to fill a vacancy as Yakovlev’s deputy. A great deal of his time and energy was devoted to the improvement of the Yak series, one of the most mass-produced fighter aircraft types of World War II.[1]

Postwar career and establishment of the Antonov company 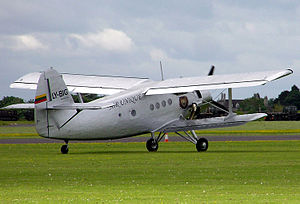 After the war, Antonov requested that Yakovlev let him work independently, heading Yakovlev’s subsidiary design office at the aircraft manufacturing factory at Novosibirsk. On 31 May 1946, Antonov was appointed head of the newly redesignated facility (subsequently known as the Antonov Research and Design Bureau), which was later moved to Kiev, Ukraine. In September 1946, Antonov, in addition to his management of the design bureau, became the Director of the Siberian R&D Institute for Aeronautics.[1]

The first of the Antonov Bureau's designs was the SKh-1 (Se'lsko Khozyaystvennyi- pervoy - agricultural-first one) agricultural aircraft, later redesignated An-2, designed to meet a 1947 Soviet requirement for a replacement for the Polikarpov Po-2 which was used in large numbers as both an agricultural aircraft and a utility aircraft. Antonov designed a large single bay biplane of all-metal construction, with an enclosed cockpit and a cabin accommodating 12 passengers.

A series of significant transports followed under Oleg Antonov's helm. Antonov aircraft (design office prefix An-) range from a rugged An-2 (which itself is comparatively large for a biplane) through the An-28 reconnaissance aircraft to the massive An-124 Ruslan strategic airlifter. The quad-turboprop An-12 and its derivatives became the primary Soviet military transport from 1959 onward. While less well-known, the An-24, An-26, An-30 and An-32 family of twin turboprop, high winged, passenger/cargo/troops aircraft predominate in domestic/short-haul air services in the former Soviet Union and parts of the world formerly under Soviet influence. Antonov also oversaw development of the mid-range (An-72/An-74 jet airplanes family. The world's largest production aircraft, the An-124 Ruslan, flew for the first time in 1982, and its specialised shuttle-carrying/extra-heavy cargo derivative, the An-225 Mriya entered development still under Antonov's guidance, but did not make its maiden flight until 1989 after the death of Antonov. In November 2004, FAI placed the An-225 in the Guinness Book of Records for its 240 records. Some of Antonov's designs are also built abroad such as the Shaanxi Y-8.

Oleg Antonov died April 4, 1984 in Kiev, Ukrainian SSR and has been buried in the Baikove Cemetery.

During his lifetime, Antonov was recognized as a Doctor of Science, Academician of the Academy of Science of the Ukrainian SSR (1968), Hero of Socialist Labor (1966), and elected member of the Supreme Soviet of the USSR of the 5th, 6th and 7th convocations.

Among numerous awards, Antonov received the State Award of the USSR in 1952 and Lenin Award in 1962.

A street in Kiev's Solomyanka neighborhood is named after Oleg Antonov.

A coin was minted of copper nickel alloy in 2006 by the National Bank of Ukraine honoring Antonov. In addition, a silver proof coin was issued by the Bank of Russia to commemorate 100 years since Antonov's birth.