Oleg Leonidovich Lomakin (Russian: Оле́г Леони́дович Лома́кин; August 29, 1924, Krasny Kholm, Tver Province, USSR – March 25, 2010, Saint Petersburg, Russian Federation) was a Russian Soviet realist painter, Honored Artist of the RSFSR, who lived and worked in Saint Petersburg (former Leningrad). He was regarded as one of the major representatives of the Leningrad school of painting,[1] 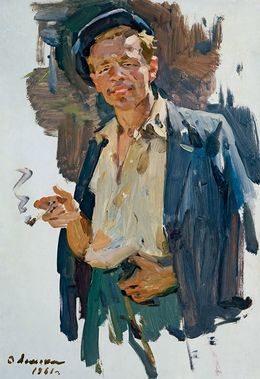 Oleg Leonidovich Lomakin was born August 29, 1924, in the town of Krasny Kholm, Tver Province, USSR. In 1930s after the death of his father a family moved first to Bezhetsk, then in Leningrad.

In June 1942, Oleg Lomakin was drafted into the Red Army and took part in the German-Soviet War. As anti-aircraft gunner he participated in the Battle of Kursk, was wounded and marked by military awards. After demobilization Lomakin returned to studies and graduated from the Secondary Art School in 1946.

In the same year Oleg Lomakin was adopted at the first course of the Department of Painting of the Repin Institute of Arts, there he studied of Boris Ioganson, Alexander Zaytsev, Mikhail Bernshtein, Piotr Ivanovsky, Vladislav Anisovich, Sergei Mikhailov. 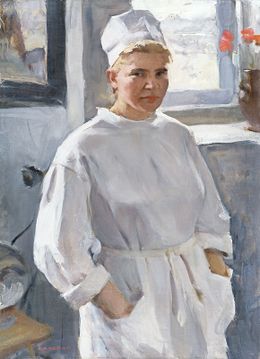 Since 1952, Lomakin has participated in Art Exhibitions. He painted portraits, genre and historical paintings, landscapes, still lifes, sketches from the life. A Portrait of a contemporary had become a leading genre in his creativity.

Oleg Lomakin's style distinguish a broad painting, energetic brushstroke, artistic transfer of tonal relations and states of lighting and air. He was acknowledged master of drawing and plein air painting.

Oleg Leonidovich Lomakin died on March 25, 2010 in Saint Petersburg at the eighty-six year of life. His paintings reside in State Russian Museum, State Tretyakov Gallery, in art museums and private collections in Russia,[3] France,[4] England, Germane, Italy, in the U.S.,[5] and others.