Oleg Alekseyevich Protopopov (Russian: Оле́г Алексе́евич Протопо́пов; born 16 July 1932)[1][2] is a former Russian pair skater who represented the Soviet Union. With his wife Ludmila Belousova he is a two-time Olympic champion (1964, 1968) and four-time World champion (1965–1968).[3] In 1979 the pair defected to Switzerland and became Swiss citizens in 1995. They continued to skate at ice shows and exhibitions through their seventies.

Protopopov started skating relatively late, at age 15, and was coached by Nina Lepninskaya.[1][4] In 1951, he was drafted into the Baltic Fleet but used each leave to skate.[4] His first partner was Margarita Bogoyavlenskaya, with whom he won the silver medal at the 1953 Soviet Championships.

Protopopov met Ludmila Belousova in the spring of 1954 in Moscow.[4] She moved to Leningrad in 1955 and began training with Protopopov in 1956 following his discharge.[4] They trained at VSS Lokomotiv and competed internationally for the USSR. Belousova and Protopopov were coached initially by Igor Moskvin and then by Petr Orlov, but parted ways with Orlov after a number of disagreements.[4] The pair then trained without a coach at a rink in Voskresensk, Moscow Oblast.[5] In 1961, they decided to work with Stanislav Zhuk to raise their technical difficulty.[5] 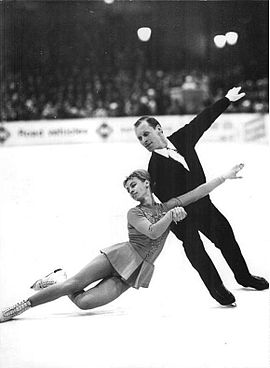 Belousova and Protopopov in 1968 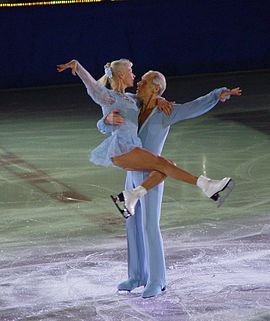 Belousova and Protopopov in 2007

Belousova and Protopopov won their first World and European gold medals in 1965, and in so doing, also became the first Soviet/Russian pair to win those titles.

They became Olympic champions for the second time at the 1968 Winter Olympics. At 32 and 35 years old respectively, they were among the oldest champions in figure skating.

The following season, they won the silver medal at the European Championships and bronze at the World Championships as Irina Rodnina began her reign with her first partner, Alexei Ulanov. Those were the pair's final appearances at major international competitions but they would continue to compete within the Soviet Union until 1972.

In total, Belousova and Protopopov won two Olympic titles and also won medals eight times at both the World and European Championships, including four consecutive World and European gold medals. After retiring from competition, they skated in shows and continue to do so. In September, 2015, they renewed their long-standing tradition of skating in a charitable exhibition in Boston, Massachusetts, called "Evening with Champions".

Belousova and Protopopov contributed to the development of pairs skating, including introducing three death spirals – the backward inside (BIDS), forward inside (FIDS), and forward outside (FODS), which they dubbed the Cosmic spiral, Life spiral, and Love spiral, respectively. Dick Button stated: "The Protopopovs are great skaters not only because they were the finest of Olympic champions, but also because their creative impact was extraordinary."[6]

Protopopov was raised by his mother, a professional ballet dancer, and his stepfather, a poet. He graduated from Herzen University, faculty of physical education.[5]

Belousova and Protopopov married in December 1957.[1] Although she kept her maiden name after their marriage, the pair are commonly referred to as "The Protopopovs".[6] Eager to keep skating the pair decided not to have children.[7]

On 24 September 1979, Belousova and Protopopov defected to Switzerland while on tour and applied for political asylum.[8] They settled in Grindelwald and eventually received Swiss citizenship in 1995.[3][9] Switzerland remains their winter home while their summer home and training center is Lake Placid, New York.[10][6] On 25 February 2003 they visited Russia for the first time after a 23-year exile, upon the invitation of Vyacheslav Fetisov.[7] They attended the 2014 Winter Olympics in Sochi, Russia.