From Infogalactic: the planetary knowledge core
Jump to: navigation, search
This name uses Eastern Slavic naming customs; the patronymic is Oleksandrovych and the family name is Aliyev.

Aliyev began his career in Borysfen-2 Boryspil (a second team of FC Borysfen Boryspil) in Druha Liha A. It was a youth club that was participating on the professional level similar to FC Dynamo-3 Kyiv and Aliyev at that time was a minor (underage). In 2002, he joined Dynamo Kyiv where he was featured mostly in Dynamo-2 Kyiv in the Ukrainian First League. He was really successful in the Dynamo-2 so he was loaned of to Ukrainian Premier League side Metalurh Zaporizhya. With Zaporizhya, he managed to get to the Ukrainian Cup finals.

After his loan ended, Aliyev was promoted to the main team of Dynamo, where he began to shine especially under new Russian head coach Yuri Semin during the 2008–2009 season. In September 2008 Ukraine legend Serhiy Rebrov hailed Aliyev's transformation into a "team player", when he thought "Aliyev was just about fun". He was key in Dynamo's campaign in the UEFA Champions League 2008-09. On 21 October 2008 he scored a beautifully flighted free kick from at least 30 yards out to give Dynamo Kiev the win against FC Porto. On 25 November, at the end of the game against Arsenal, Aliyev pushed the referee, Alain Hamer, and received a red card for his action. Later, during the interview he called Hamer a "kozel" (the goat -eng.) which means similarly to "idiot" in this context.[2] Dynamo Kyiv finished third in their Champions League group, moving down to UEFA Cup 2008-09 after the winter break. Aliyev was an instrumental player throughout the campaign here too. He played in most of the games, helping Dynamo get to the semi-finals, where they were eliminated by fellow Ukrainian rivals, and eventual UEFA Cup Champions Shakhtar Donetsk. Dynamo also won the Ukrainian Premier League 2008-09 that season as well. Later in 2009–10 season he was a part of starting lineup for Ukrainian Super Cup match against Vorskla Poltava. After a few minutes in that game he got injured and missed few months of the starting season. On recovery Aliyev was not able to secure a starting position and asked for a transfer during the winter break.

In January 2014 Aliyev moved from Dynamo Kyiv to Anzhi Makhachkala on a 2.5-year contract.[6] Aliyev left Anzhi at the end of the 2013-14 by mutual consent. Shortly thereafter, he re-signed with Anzhi again, before having his contract terminated by mutually consent in January 2015.[7] 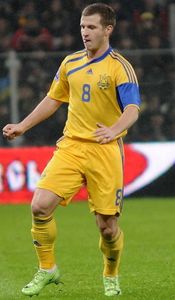 Aliyev playing for Ukraine in 2009.

Aliyev played the under-20 2005 FIFA World Youth Championship in Netherlands. He was one of the top scorers of the tournament with five goals, one less than Lionel Messi, the top scorer. Aliyev also played in the Ukraine national under-21 football team in the 2006 UEFA European Under-21 Football Championship, helping his side reach the final. His set piece goal from more than 40 yards that hit the cross-bar and went in against Turkey in the U-21 Championship has been regarded as one of the best goals in U-21 Football history. He is the current top goalscorer of the Ukrainian under-21 team with eight goals.

On 6 September 2008, Aliyev got his first senior cap for Ukraine. He was substituted on for Maksym Kalynychenko starting from the second half.