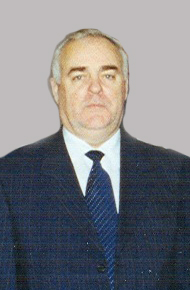 Oleksandr Mykolaiovych Tkachenko (Ukrainian: Олександр Миколайович Ткаченко) is a Ukrainian politician, a senior member of the Ukrainian Parliament, currently elected by Communist Party list. Between July 7, 1998, and January 21, 2000, Tkachenko was the Chairman of the Parliament.

Tkachenko was born on March 7, 1939, in Shpola, Cherkasy Oblast. In 1963 he graduated from Bila Tserkva Agriculture Institute. Between 1963 and 1981 he worked in Tarascha Raion, Kiev Oblast, first as an agronomist and later as a local Communist party leader. In 1981 he became an inspector of the Central Committee of the KPU. In 1982 he was appointed Governor of Ternopil Oblast, and in 1985 he was appointed Minister of Agriculture of the Ukrainian SSR.

In 1991 and 1999 he was a candidate in the election for President of Ukraine. On both occasions he withdrew his candidacy, the first time in favor of Leonid Kravchuk, and the second time in favor of Petro Symonenko.