Olga Alekseyevna Zaitseva (Russian: Ольга Алексеевна Зайцева; born 16 May 1978) is a former Russian biathlete. She began her career in 1994. After not competing in the 2014–15 season, Zaitseva announced her retirement on 24 January 2015.[2] Shortly afterwards she announced that she had been appointed as caretaker head coach of the Russian biathlon team.[3]

Zaitseva has won two gold medals and one silver medal at the Winter Olympic Games.

On 1 December 2017 she was disqualified from the 2014 Winter Olympics for doping offences.[4] She appealed this decision to the Court of Arbitration for Sport.[5] 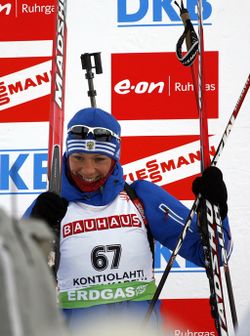 During her first 1999—2000 World Cup season, Zaitseva only appeared in one race, didn't scoring for the overall standings. Starting from the second half 2001—02 season, she became a regular in the Russian World Cup team. The best result is the 4th place in the 2004—05 season and winning the mass start discipline cup of the same season.

Over the course of her career, Zaitseva has reached twelve personal World Cup wins. In the history of the International Biathlon Union she is ranked twelfth for all-time career victories. In addition, she has won twelve relay races and two mixed relay events as part of the Russian World Cup team. 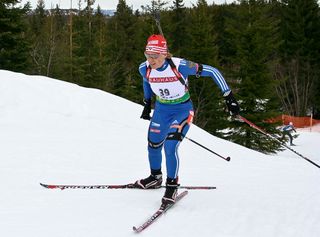 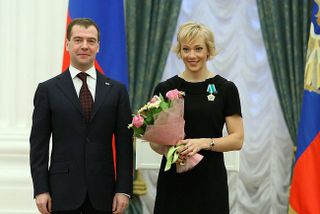 On 30 September 2006 Zaitseva married Milan Augustin, a Slovakian biathlon coach; they had a son Aleksandr born in 2007,[13] but divorced in 2013.[14] In October 2015 Zaitseva gave birth to her second son Stepan. Around that time she stopped coaching and was employed as a consultant for the Russian biathlon team. She is expected to return to coaching in 2016.[15]