From Infogalactic: the planetary knowledge core
(Redirected from On Monsieur’s Departure)
Jump to: navigation, search

On Monsieur’s Departure is an Elizabethan poem attributed to Elizabeth I. It is written in the form of a meditation on the failure of her marriage negotiations with Francis, Duke of Anjou yet has also been attributed to her alleged affair with, and love of, Robert Dudley, 1st Earl of Leicester.

The Elizabethan era saw the emergence of the English Renaissance and consequently that of such notable figures as Edmund Spenser, Sir Francis Bacon, and William Shakespeare.

Elizabeth I was unusually well-educated for a person of her time and wrote several poems, which seem to have been based on her life, in an era where courtly love was the European tradition. “On Monsieur’s Departure,” is a poem in which the persona has fallen victim to unrequited love.

I grieve and dare not show my discontent;
I love, and yet am forced to seem to hate;
I do, yet dare not say I ever meant;
I seem stark mute, but inwardly do prate.
I am, and not; I freeze and yet am burned,
Since from myself another self I turned.

My care is like my shadow in the sun --
Follows me flying, flies when I pursue it,
Stands, and lies by me, doth what I have done;
His too familiar care doth make me rue it.
No means I find to rid him from my breast,
Till by the end of things it be suppressed.

Some gentler passion slide into my mind,
For I am soft and made of melting snow;
Or be more cruel, Love, and so be kind.
Let me or float or sink, be high or low;
Or let me live with some more sweet content,
Or die, and so forget what love e'er meant. 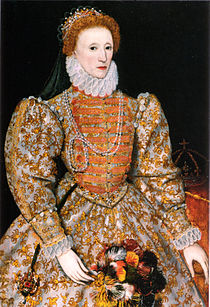 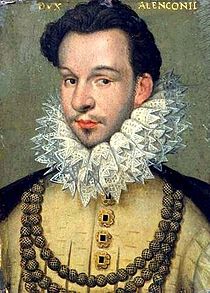 François, Duke of Alençon (1555-1584), a potential husband of Elizabeth, and the monsieur of the title

The poem consists of three sestet stanzas, each in iambic pentameter, with a rhyme scheme following the ABABCC pattern.

In the first stanza Elizabeth means that she hides strong unhappiness and love (of Anjou) in favour of an appearance of cool and dislike. This show may be meant to please her subjects or save her pride because the idea of her marriage with Anjou was very unpopular amongst her subjects. In any case, she has turned (or is turning) from her former (and more natural) self (or behavior) to something different.

The second stanza is about her unhappiness. It is her constant companion, she has never been able to make it go away, and she feels that only death could banish it.

In the third stanza Elizabeth asks for less intense feelings, saying she is fragile. She wishes Anjou were less nice so that she could get over her feelings more easily. The fourth line means either that she wishes she could feel good or bad, which would seem to contradict the first line, or that she wishes she could show (and vent) these feelings properly, or perhaps that she could feel one extreme or the other, rather than both at once: high OR low. Finally, she says if she cannot be happier, she would like to die so that thoughts of love no longer trouble her. She doubts she will ever be fulfilled in terms of love. Whether she really wanted to die or said that for dramatic effect is unclear, and of course the overall sincerity of the poem is also unclear.

This poem differs from poems such as, “My Lute, Awake!” written by Sir Thomas Wyatt, during the same time period. While they both portray unrequited love they portray it in a different manner. Elizabeth shares the responsibility with her lover and even knows of his pain. Yet in, “My Lute, Awake!” the author leaves all the blame to the woman that he desires and does not wish her well.

Elizabeth expresses the feeling of sorrow that surfaces from this disillusion but also understands the other person’s perspective. Her dilemma is suppressing her emotions. The poem is expressed with a sorrowful tone. Hence, creating a feeling of pity in the audience, specifically in the closing line, “Or die and so forget what love ere meant” (18).

In Susan Kay's novel Legacy, Elizabeth starts writing the poem as Anjou leaves her. The first part of the poem is written in the book as this happens.

The third episode of the BBC drama Elizabeth R, which deals with the courtship of the Queen, was titled 'Shadow in the Sun' after the poem. At the end of the episode Elizabeth (Glenda Jackson) mentally composes the poem, using a voiceover as she watches her suitor depart.

Selected lines of the poem were adapted and set to music by Michael Phipps and sung by the Mediaeval Baebes for the soundtrack to the later BBC drama The Virgin Queen.

In the Channel 4 drama Elizabeth I, starring Helen Mirren as the Queen, the poem is given to Anjou upon his departure and as he reads it on the boat, Elizabeth's voice recites it over the scene.