From Infogalactic: the planetary knowledge core
Jump to: navigation, search
This article is about the treatise on military strategy. For the manga series, see Neo Gomanism Manifesto Special - On War. For the 2008 film, see On War (film). 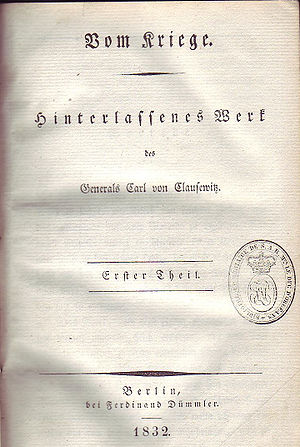 Vom Kriege (German pronunciation: [fɔm ˈkʁiːɡə]) is a book on war and military strategy by Prussian general Carl von Clausewitz (1780–1831), written mostly after the Napoleonic wars, between 1816 and 1830, and published posthumously by his wife Marie von Brühl in 1832. It has been translated into English several times as On War. On War is actually an unfinished work; Clausewitz had set about revising his accumulated manuscripts in 1827, but did not live to finish the task. His wife edited his collected works and published them between 1832 and 1835. His 10-volume collected works contain most of his larger historical and theoretical writings, though not his shorter articles and papers or his extensive correspondence with important political, military, intellectual and cultural leaders in the Prussian state. On War is formed by the first three volumes and represents his theoretical explorations. It is one of the most important treatises on political-military analysis and strategy ever written, and remains both controversial and an influence on strategic thinking.

Clausewitz was among those intrigued by the manner in which the leaders of the French Revolution, especially Napoleon, had changed the conduct of war through their ability to motivate the populace and to gain access to the full resources of the state; thus unleashing war on a greater scale than had previously been seen in Europe. Clausewitz was well educated and had strong interests in art, history, science, and education. He was a professional soldier who spent a considerable part of his life fighting against Napoleon. The insights he gained from his political and military experiences, combined with a solid grasp of European history, provided the basis for the book. 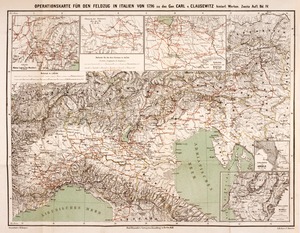 The book contains a wealth of historical examples used to illustrate its various concepts. Frederick II of Prussia (the Great) figures prominently for having made very efficient use of the limited forces at his disposal, though Napoleon is perhaps the central figure.

According to Azar Gat, the "general message" of the book was that "the conduct of war could not be reduced to universal principles."[1] Among many strands of thought, three stand out as essential to Clausewitz's concept:

Some of the key ideas (not necessarily original to Clausewitz or even to his mentor Gerhard von Scharnhorst) discussed in On War include (in no particular order of importance):

Clausewitz used a dialectical method to construct his argument, leading to frequent modern misinterpretation because he explores various—often opposed—ideas before coming to conclusions.

Modern perception of war are based on the concepts Clausewitz put forth in On War, though these have been very diversely interpreted by various leaders (e.g., Moltke, Vladimir Lenin, Dwight D. Eisenhower, Mao Zedong, etc.), thinkers, armies, and peoples. Modern military doctrine, organization, and norms are all based on Napoleonic premises, even to this day—though whether these premises are necessarily also "Clausewitzian" is debatable.

The "dualism" of Clausewitz's view of war (i.e., that wars can vary a great deal between the two "poles" he proposed, based on the political objectives of the opposing sides and the context) seems simple enough, but few commentators have proven willing to accept this crucial variability—they insist that Clausewitz "really" argued for one end of the scale or the other. On War has been seen by some prominent critics as an argument for "total war".[a] It has been blamed for the level of destruction involved in the First and Second World Wars, but it seems rather that Clausewitz (who did not actually use the term "total war") had merely foreseen the inevitable development that started with the huge, patriotically motivated armies of the Napoleonic wars. These wars resulted (though war's evolution has not yet ended) in the atomic bombing of Hiroshima and Nagasaki, with all the forces and capabilities of the state devoted to destroying forces and capabilities of the enemy state (thus "total war"). Conversely, Clausewitz has also been seen as "The preeminent military and political strategist of limited war in modern times." (Robert Osgood, 1979)

Clausewitz and his proponents have been severely criticized by competing theorists--Antoine-Henri Jomini in the 19th century, B. H. Liddell Hart in the mid-20th century, and Martin van Creveld and John Keegan more recently. On War is a work rooted solely in the world of the nation state, says historian Martin Van Creveld, who alleges that Clausewitz takes the state "almost for granted" as he rarely looks at anything previous to Westphalia. He alleges that Clausewitz does not address any form of intra/supra-state conflict, such as rebellion and revolution, because he could not theoretically account for warfare before the existence of the state. Previous kinds of conflict were demoted to criminal activities without legitimacy and not worthy of the label "war." Van Creveld argues that "Clausewitzian war" requires the state to act in conjunction with the people and the army, the state becoming a massive engine built to exert military force against an identical opponent. He supports this statement by pointing to the conventional armies in existence throughout the 20th century. This view ignores, among many other things, the facts that Clausewitz died in the early 19th century, that Prussia itself was not a "nation-state," and that the Napoleonic Wars included many non-conventional conflicts of which Clausewitz was well aware. In any case, revolutionaries like Karl Marx, Friedrich Engels, Vladimir Lenin, Leon Trotsky [3] and Mao Zedong had no trouble adapting Clausewitz's concepts to their own purposes. Nor did conservatives like the Elder Moltke and Dwight D. Eisenhower. Much of Clausewitz's thinking was based on his experience as a Prussian war planner concerned with how to use popular forces in an insurrectionary struggle against the much-superior French forces which occupied Prussia after 1806—how, in short, to wage a "Spanish War in Germany."

Clausewitz himself never saw the 20th-century states and armies to which Creveld refers—the states with which he himself was familiar were quite different. In any case, the "Clausewitzian Trinity" that Van Creveld condemns as consisting of a rigid, static hierarchy of "People, Army, and Government," does not in fact consist of those three concrete actors. In fact, the words people, army, and government appear nowhere in the paragraph in which Clausewitz defines his famous Trinity. Rather, the Trinity of forces that drive the course of real-world war in Clausewitz's view are 1) violent emotion, 2) the interplay of chance and probability, and 3) political calculations driven by reason. It seems unlikely that emotion, chance, and rationality will cease to play a role in war any time soon, whatever the fate of the state.

a. ^ : For example, writing in his introduction to Sun Tzu's Art of War, B. H. Liddell Hart stated that "Civilization might have been spared much of the damage suffered in the world wars of this century if the influence of Clausewitz's monumental tome On War, which molded European military thought in the era preceding the First World War, had been blended with and balanced by a knowledge of Sun Tzu's exposition on The Art of War." This comment is tempered by the comment that the "ill-effects of Clausewitz's teaching arose largely from his disciples' too shallow and too extreme interpretation of it," but it remains an influential criticism. Extracted from The Art of War (UNESCO Collection of Representative Works), Samuel B. Griffith http://www.kw.igs.net/~tacit/artofwar/suntzu.htm.