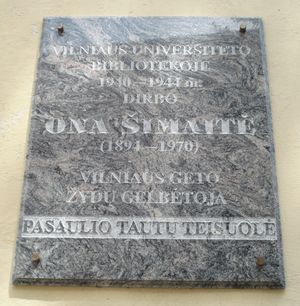 Ona Šimaitė (6 January 1894 – 17 January 1970) of Lithuania, a librarian at Vilnius University, used her position to aid and rescue Jews in the Vilna Ghetto.

Born in Akmenė on 6 January 1894[1] and later educated in Moscow, Šimaitė became a librarian at Vilnius University in 1940. After the Nazi invasion and the creation of the Vilna Ghetto in 1941 she began entering the ghetto under the pretext of recovering library books from Jewish university students. Over the next three years she smuggled in food and small arms (helped by Kazys Boruta, amongst others) and other provisions and smuggled out literary and historical documents, and also served as a mail carrier for the ghetto inhabitants, connecting them with the outer world. She also found people who would forge documents for Jews, offered her home as a temporary refuge for Jews, and smuggled Jewish children out of the ghetto to families she found who agreed to hide them.

In April 1944, the Gestapo arrested and tortured Šimaitė. A ransom paid by the rector of the university spared her immediate execution and she was deported to the Dachau concentration camp and later transferred to Ludelange internment camp in France.

Following liberation by the Allies, Šimaitė remained in France, working as a librarian, except for a period from 1953 to 1956 spent in Israel.

Šimaitė died outside of Paris on 17 January 1970[1] and, per her request, her body was donated to science.

In 2015 Lithuania's first street sign honoring a Righteous Among the Nations was unveiled in Vilnius.[3] The street is named Simaites Street, after Šimaitė.[3]

This article incorporates text from the United States Holocaust Memorial Museum, and has been released under the GFDL.