From Infogalactic: the planetary knowledge core
(Redirected from Ontogenesis)
Jump to: navigation, search 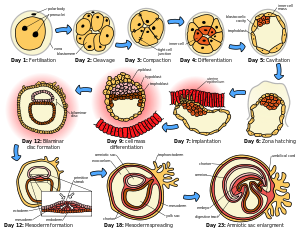 The initial stages of human embryogenesis 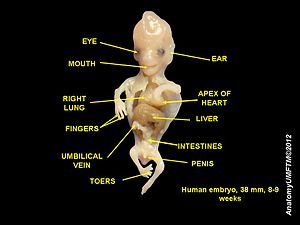 Parts of a human embryo
This article concerns ontogeny in biology. Not to be confused with the philosophical concept ontology, or the medical terms oncology or odontology.

Ontogeny (also ontogenesis or morphogenesis) is the origination and development of an organism, usually from the time of fertilization of the egg to the organism's mature form. Yet, the term can be used to refer to the study of the entirety of an organism's lifespan.

Ontogeny, embryology and developmental biology are closely related studies and the terms are sometimes used interchangeably. Recently (2003), the term ontogeny has been used in cell biology to describe the development of various cell types within an organism.[2]

Ontogeny is also a concept used in anthropology as "the process through which each of us embodies the history of our own making".[3]

The word ontogeny comes from the Greek ὄν, on (gen. ὄντος, ontos), i.e. "being; that which is", which is the present participle of the verb εἰμί, eimi, i.e. "to be, I am", and from the suffix -geny from the Greek -γένεια -geneia, which expresses the concept of "mode of production".[4]

A seminal paper named ontogeny as one of the four primary questions of biology, along with Huxley's three others: causation, survival value and evolution.[5] Tinbergen emphasized that the change of behavioral machinery during development was distinct from the change in behavior during development. "We can conclude that the thrush itself, i.e. its behavioral machinery, has changed only if the behavior change occurred while the environment was held constant...When we turn from description to causal analysis, and ask in what way the observed change in behavior machinery has been brought about, the natural first step is to try and distinguish between environmental influences and those within the animal...In ontogeny the conclusion that a certain change is internally controlled (is "innate") is reached by elimination. " (p. 424) Tinbergen was concerned that the elimination of environmental factors is difficult to establish, and the use of the word "innate" is often misleading.

Most organisms undergo dramatic changes in shape as they grow and mature. Even "reptiles" (e.g., crocodilians, turtles, snakes,[6] lizards[7]), in which the offspring are often viewed as miniature adults, show a variety of ontogenetic changes in morphology and physiology.[8]

Comparing ourselves to others is something humans do all the time. "In doing so we are acknowledging not so much our sameness to others or our difference, but rather the commonality that resides in our difference. In other words, because each one of us is at once remarkably similar to, and remarkably different from, all other humans, it makes little sense to think of comparison in terms of a list of absolute similarities and a list of absolute differences. Rather, in respect of all other humans, we find similarities in the ways we are different from one another and differences in the ways we are the same. That we are able to do this is a function of the genuinely historical process that is human ontogeny".[3]