Opa-locka is a city located in Miami-Dade County, Florida, United States. As of the 2010 U.S. Census, the population was 15,219.[1] The city was developed by Glenn Curtiss and was based on a One Thousand and One Nights theme. Opa-locka has the largest collection of Moorish Revival architecture in the Western hemisphere.[2] Its streets have names like Sabur Lane, Sultan Avenue, Ali Baba Avenue, Perviz Avenue and Sesame Street.[2] Opa-locka has an area of 4.2 square miles (11 km2) and is located in the northeastern area of Miami-Dade County, Florida.

The name Opa-locka is an abbreviation of a Seminole place name, spelled Opa-tisha-wocka-locka. The original name probably signified a wooded hammock in a swamp.[3]

Opa-locka was founded by aviation pioneer Glenn Curtiss in 1926. Curtiss developed the city with a Moorish architecture theme. While the 1926 Miami hurricane badly damaged the city and brought the Florida land boom to a halt, several Moorish-style buildings survived.[4][5] Twenty of the original Moorish Revival architecture buildings have been listed on the National Register of Historic Places as part of the Opa-locka Thematic Resource Area.[citation needed]

The city was the first community in the United States to commemorate the first African-American President of the United States. A mile-long section of Perviz Avenue — from Oriental Boulevard to Ali Baba Avenue — was renamed Barack Obama Avenue on February 17, 2009.[8]

In addition to the unique buildings, Opa-locka has a large general aviation airport, three parks, two lakes and a railroad station which is currently the tri-rail station. The city is a mixture of residential, commercial and industrial zones. The city was the backdrop for the making of movies such as "Living Dreams", Texas Justice, Bad Boys II and 2 Fast 2 Furious.[8]

Opa-locka is located at Lua error in Module:Coordinates at line 668: callParserFunction: function "#coordinates" was not found..[9]

The city of Opa-locka was incorporated in 1926 and operates under a commission/city manager form of government. The city commission consists of the mayor and four commissioners, who are responsible for enacting ordinances, resolutions and regulations governing the city; and appointing the members of various advisory boards, the city manager, city attorney and city clerk. As chief administrative officer, the city manager is responsible for the enforcement of laws and ordinances, and the appointment and supervision of the city's department heads. Municipal services include police, sanitation, water and sewer services, storm water services, maintenance of streets and infrastructure, and recreational activities. The financial reporting entity, under which the financial statements are prepared, includes all the activities and functions for which the city is financially accountable.

In 2004 Opa-locka had the highest rate of violent crime for any city in the United States.[18] Calvin Godfrey of the Miami New Times said in a 2009 article that Opa-locka was "mired in crime and sinking fast."[19]

In a 2013 editorial, the Miami Herald called the city "crime-plagued" and the department "deeply troubled."[20] Calvin Godfrey of the Miami New Times said that the police department had been "steadily deteriorating" for the 20-year period leading up to 2009. The police force decreased from 50 to 16. The Miami New Times received memorandums that, in Godfrey's words, "reveal an agency rife with controversy." In January 2005, after negative Florida Department of Law Enforcement evaluations of the Opa-locka police force surfaced, the Miami-Dade Police Department sent county commissioner Barbara Jordan a report that stated that it would cost $7 million per period to take over the Opa-locka police duties. In 2005, Opa-locka allocated $3.5 million to its officers. Jannie Beverly, the city manager of Opa-locka, fired the police chief in January 2008 after he had been accused of corruption.[19]

Opa-locka crime statistics report an overall downward trend in crime based on data from 12 years with violent crime decreasing and property crime decreasing. Based on this trend, the crime rate in Opa-locka for 2013 is expected to be lower than in 2010.[22] 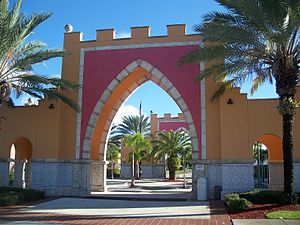 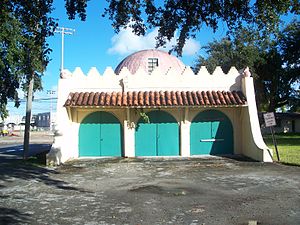 A building with Moorish features

Opa-locka had 30 houses of worship in 1996. During that year, Oscar Musibay of the Miami New Times said, "Like South Beach has hotels, Opa-locka has churches."[26]

Opa-locka is served by Opa-locka Executive Airport, owned and operated by the Miami-Dade County Aviation Department.

Additionally, Opa-locka is served by Miami-Dade Transit buses and by Tri-Rail via the Opa-locka Station.