OpenHMPP (HMPP[1] for Hybrid Multicore Parallel Programming) - programming standard for Heterogeneous computing. Based on a set of compiler directives, standard is a programming model designed to handle hardware accelerators without the complexity associated with GPU programming. This approach based on directives has been implemented because they enable a loose relationship between an application code and the use of a hardware accelerator (HWA).

The OpenHMPP directive-based programming model offers a syntax to offload computations on hardware accelerators and to optimize data movement to/from the hardware memory.

The model is based on works initialized by CAPS (Compiler and Architecture for Embedded and Superscalar Processors), a common project from INRIA, CNRS, the University of Rennes 1 and the INSA of Rennes.

OpenHMPP is based on the concept of codelets, functions that can be remotely executed on HWAs.

A codelet has the following properties:

These properties ensure that a codelet RPC can be remotely executed by a HWA. This RPC and its associated data transfers can be asynchronous. 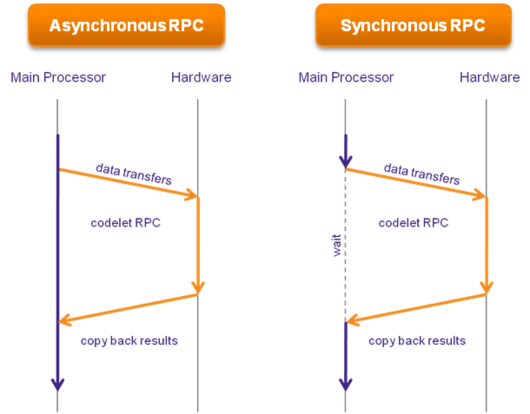 HMPP considers two address spaces: the host processor one and the HWA memory. 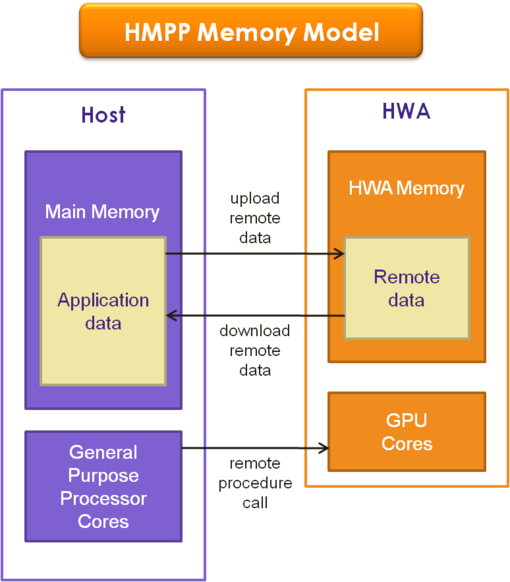 The OpenHMPP directives may be seen as “meta-information” added in the application source code. They are safe meta-information i.e. they do not change the original code behavior. They address the remote execution (RPC) of a function as well as the transfers of data to/from the HWA memory.

Concept of set of directives

One of the fundamental points of the HMPP approach is the concept of directives and their associated labels which makes it possible to expose a coherent structure on a whole set of directives disseminated in an application.

There are two kinds of labels:

In order to simplify the notations, regular expressions will be used to describe the syntax of the HMPP directives.

The color convention below is used for the description of syntax directives:

The general syntax of OpenHMPP directives is:

Directives for declaring and executing a codelet

The syntax of the directive is:

The callsite directive specifies how the use a codelet at a given point in the program.

The syntax of the directive is:

An example is shown here :

In some cases, a specific management of the data throughout the application is required (CPU/GPU data movements optimization, shared variables...).

The group directive allows the declaration of a group of codelets. The parameters defined in this directive are applied to all codelets belonging to the group. The syntax of the directive is:

When using a HWA, the main bottleneck is often the data transfers between the HWA and the main processor.
To limit the communication overhead, data transfers can be overlapped with successive executions of the same codelet by using the asynchronous property of the HWA.

The allocate directive locks the HWA and allocates the needed amount of memory.

The release directive specifies when to release the HWA for a group or a stand-alone codelet.

The delegatedstore directive is a synchronization barrier to wait for an asynchronous codelet execution to complete and to then download the results.

In the following example, the device initialization, memory allocation and upload of the input data are done only once outside the loop and not in each iteration of the loop.

The synchronize directive allows to wait for the asynchronous execution of the codelet to complete before launching another iteration. Finally the delegatedstore directive outside the loop uploads the sgemm result.

Those directives map together all the arguments sharing the given name for all the group.

The types and dimensions of all mapped arguments must be identical.

The map directive maps several arguments on the device.

The resident directive declares some variables as global within a group. Those variables can then be directly accessed from any codelet belonging to the group. This directive applies to the declaration statement just following it in the source code.

The syntax of this directive is:

The notation ::var_name with the prefix ::, indicates an application’s variable declared as resident.

The OpenHMPP Open Standard is based on HMPP Version 2.3 (May 2009, CAPS entreprise).