Open wagons form a large group of railway goods wagons designed primarily for the transportation of bulk goods that are not moisture-retentive and can usually be tipped, dumped or shovelled. The International Union of Railways (UIC) distinguishes between ordinary wagons (Class E/UIC-type 5) and special wagons (F/6). Open wagons often form a significant part of a railway company's goods wagon fleet; for example, forming just under 40% of the Deutsche Bahn's total goods wagon stock in Germany.

Since the 1960s, the majority of goods wagons procured by European railway administrations have been built to standards laid down by, or based on, those established by the UIC. In addition to open wagons the table also shows wagons with opening roofs (Class T), whose design is based on open wagons.

These wagons have a level floor and solid sides with at least one door on each side. They are mainly used for transporting bulk goods, coal, scrap, steel, wood and paper. The majority of wagons have folding sides and end walls, otherwise they are given the letters l (fixed sides) or o (fixed end walls). Wagons may have one or two folding end walls. Steel rings enable ropes, nets or covers to be attached to secure the load.

Some of these wagons can also be completely tipped over, in other words, at certain places they can be lifted up and emptied by being turned about their longitudinal axis. This requires a very robust underframe. Sometimes the wagons are fitted with rotatable couplings so that they do not have to be individually uncoupled.

In 1998 the DB had about 16,000 four-axle Class E wagons. They have increasingly retired their twin-axled E wagons since the 1990s and they are now rarely seen. 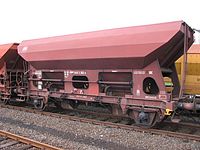 The majority of these are self-discharging hoppers which use gravity-unloading (hopper wagons and saddle-bottomed wagons), but in addition there are also:

Typical loads for these wagons are all sorts of bulk goods, like coal, coke, ore, sand or gravel. Because bulk goods are often moved in large quantities, these wagons are frequently used in so-called unit or block trains that only comprise one type of wagon and only shift one type of product from the dispatcher to the recipient.

Hopper wagons can only be unloaded by gravity with no external assistance and are therefore also classed as self-discharging wagons. The majority may be filled, when at rail or road level, by high-level discharge chutes (whose ends are more than 70 cm above the top of the rails) or conveyor belts. Because a controlled amount of the load can be discharged at any place the wagons may be sent anywhere and are even used individually. Railway companies also use hoppers as departmental wagons in maintenance of way trains for ballasting the track.

Since the 1990s there has been a trend for new hopper wagons to be built as bogie wagons which have not yet been standardised by the UIC.

Saddle-bottomed wagons are large-volume hoppers are exclusively unloaded by gravity and are therefore classed as self-discharging hoppers. Unlike normal hopper wagons, however, their discharge cannot be controlled and the entire load must be dropped. To unload the flaps on the side swing out allowing the load to empty. This is aided by the floor which slopes downwards on both sides like a gable roof. The discharging chutes on either side are relatively high up. These wagons are frequently seen in unit trains for transporting bulk goods such as coal or mineral ore from mines or ports to steelworks or power stations.

Side-tipping wagons have hydraulic, pneumatic or electric tipping equipment, that enables the wagon body to be lifted on one side. Depending on the design, they may be tipped to both sides or just one side only. In order to prevent wagons from falling over during the tipping operation, some are equipped with track pinch bars with which they can be securely anchored to the trackbed. These wagons are often seen in unit trains being used to remove excavated material from major construction sites.

Modalohrs are specialized wagons for carrying road trailers and road tractors on the AFF route from France to Italy and Luxembourg to Spain and vice versa; there are plans to expand this service.[1] A deck between the bogies (trucks) pivots (swings) 30°, allowing the trailers to be loaded from the sides. The cars are built by Lohr Industrie.