Operation Kutuzov was a big offensive conducted in July 1943 by the Red Army against Army Group Center of the German Wehrmacht. The operation was named after General Mikhail Kutuzov, the Russian general credited with saving Russia from Napoleon during the French invasion of Russia in 1812. Operation Kutuzov was one of two major Soviet operations launched as counteroffensives against Operation Citadel. The Operation began on 12 July and ended on 18 August 1943 with the capture of Orel and collapse of the Orel bulge.

As the end of the rasputitsa or rainy season approached, the Soviet command considered their next step to bring the war to a successful conclusion. Stalin strongly desired to seize the initiative and attack the German forces but was convinced by his senior commanders to take an initial defensive posture and allow the Germans to weaken themselves in attacking prepared positions. After this the Soviet forces would go over onto the offensive.[10] Operation Kutusov was the offensive plan for the Soviet forces before Moscow facing the German forces of Army Group Center. It was carried out by three Soviet Fronts or army groups: the Western Front, the Bryansk Front and the Central Front. The offensive was directed north of the Kursk area against the German 2nd Panzer Army, with the intention of cutting behind and trapping the German 9th Army then conducting offensive operations against the Kursk salient.[11]

The Germans had spread their forces thin all across the front in an effort to provide as much men and material as possible for Operation Citadel. Holding the front before the Soviet offensive were the 2nd Panzer Army and elements of the 9th Army. The region had been held by German forces for nearly two years and despite Hitler's admonition not to build defensive works behind the front, some preparations had been made. A defensive line had been started that was 5–7 kilometres (3.1–4.3 mi) in depth, consisting of minefields, interconnected trench works, and strong points. Wherever possible, the Germans took advantage of terrain features such as streams, ravines and gullies but the positions were thinly held.[12]

The Soviet high command planned two offensives as part of a large general offensive throughout the eastern front.[13] Operation Kutuzov was the northern offensive, with its objective being to collapse the Orel salient, cut behind the 9th Army engaged in offensive operations at Kursk, encircle and annihilate it. In doing so they hoped to cause a general collapse of the German forces in the Soviet Union. The attack was to begin once the German panzer units engaged in Operation Citadel were locked into combat and weakened by their offensive at Kursk. The initial attack was to be made simultaneously on the northern and eastern faces of the Orel salient, with the Central Front along the southern face of the salient joining in as well, once the German offensive had been stopped.

German intelligence had revealed the Soviet forces massing opposite the 2nd Panzer Army and these had caused great concern to Kluge and Model. The Soviet armies earmarked for the operation had amassed a force of 1,286,000 men and 2,400 tanks. These were supported by 26,400 guns and 3,000 aircraft.[14][15] 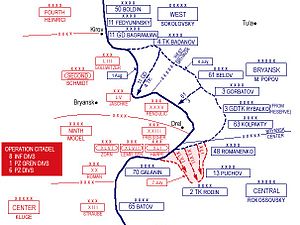 The Soviet offensive was aided by partisan attacks behind the German lines. Approximately 100,000 Soviet partisans were working to disrupt German efforts to supply and reinforce their forces. German movements of ammunition and reinforcements were hampered throughout the operation by attacks on German communications and supply routes, especially railway lines. The partisans operated under the guidance of the Red Army.[16]

File:Rybalko e i suoi T34.jpg
General Rybalko, commander of the 3rd Guards Tank Army, observes the movement of his T-34s to the front, 1943

On 12 July, a heavy artillery barrage marked the launching of the offensive. The armies of the Bryansk Front and the Western Front attacked along the north and north-east flanks of the 2nd Panzer Army. The Western Front assault was led by the 11th Guards Army under Lieutenant General Hovhannes Bagramyan, supported by the 1st and 5th Tank Corps. The Russians attacked with overwhelming numbers. Along one 16-kilometre (9.9 mi) attack sector near Ulianovo, six Soviet rifle divisions attacked two German infantry regiments. At 5–7 kilometres (3.1–4.3 mi) in depth, the German defensive lines were deeper than the Soviets expected. The Soviet spearheads sustained heavy casualties but pushed through and in some areas achieved significant penetration.[17][18] The defenders were overwhelmed by the afternoon of the first day, with the 11th Guards Army advancing some 23 kilometres (14 mi). The German 5th Panzer Division attempted to fill the breach but they were met by the Russian supporting armour and were forced back.

The initial attacks on the eastern face by the Bryansk Front were less successful. The 61st, 3rd, and 63rd armies advanced 8, 14 and 15 kilometres (5.0, 8.7 and 9.3 mi) respectively. The following day the German LIII Army Corps counter-attacked and brought the Bryansk Front to a halt. The open terrain favored the longer ranged guns of the Germans. Kluge and Model had anticipated the Soviet attack and were quick to transfer units from the Kursk area to reinforce the defenders. Their timely arrival helped check the Soviet advance.

Farther north the 11th Guards Army was forcing its way through the German defences. The Germans lacked the reserves to block these penetrations. With the danger of a breakthrough and subsequent encirclement of their forces, the situation soon become serious for the 2nd Panzer Army.[18] Army Group Centre transferred command of the 2nd Panzer Army to Model by the end of the second day. As Model was already commanding the German 9th Army making the north portion of the Kursk attack, the command transfer meant he was now in command of all German units in the Orel area.

Three days later the second phase of Operation Kutuzov was initiated, with attacks on the German 9th Army by several Soviet armies. The total Soviet troops now engaged in Operation Kutuzov numbered 1,286,049 men supported by 2,409 tanks and 26,379 guns.[19] The Soviets broadened the offensive, adding supporting attacks by the 50th Army to the north of the 11th Guards Army. Between the 50th Army and the Bryansk Front was a thrust by the 20th Tank Corps aimed at Bolkov, along with a push by the Central Front on the south face. To increase the momentum of the attack the Soviets now committed the 3rd Guards Tank Army and 4th Tank Army from the reserves. The 3rd Guards drove straight for Orel, attempting to develop the eastern attack, while the 4th Tank Army drove from the north along the wider breach made by 11th Guards Army. In doing so they threatened to trap the German forces defending the east face of the Orel salient. German defensive efforts were hampered by partisan attacks to their communications and rail supply lines.

As Soviet breakthroughs developed the situation for the Germans became serious. The entire 9th Army was threatened with being cut off. Model sent nearly all of his Panzer units to aid the 2nd Panzer Army, whose northern front was about to collapse, while to the north the 4th Army sent down the 253rd Infantry Division. The Germans achieved a temporary stabilization of the front while the 9th Army began to withdraw from their captured ground. The Soviet Central Front followed them hesitantly at first but increased the intensity of their attacks from the ground and the air.[18] On 18 July the 9th Army was back at its starting points of 5 July. 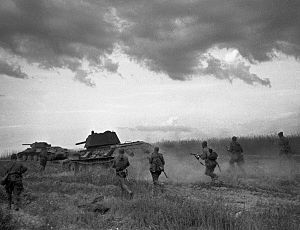 A series of engagements developed in the Orel salient between arriving German reserves and Soviet tank formations. Though Hitler forbade retreat, the Soviets gradually gained ground. By July 26, the German troops were forced to desert the Orel base of operations and begin a withdrawal to the Hagen position to the east of Briansk. With the 11th Guards reaching the outskirts of Karachev, midway between Orel and Bryansk, they threatened to cut the main rail line which was the main route of supply. On July 29, Bolkhov was liberated, and on August 4 the struggle for Orel commenced. After one day of hard fighting Orel was taken. With their position untenable, the Germans were forced to evacuate back to prepared positions at the Hagen line. By August 18 Soviet troops had reached the Hagen line east of Briansk at the base of the Orel salient. With the German defeat the counter-offensive began to grow into a general Soviet offensive.

Contest for control of the air

In the Southern sector of the bulge, the Germans logged over 1,000 missions on the first day, countered by the 737 missions of the 15th Air Army. The Luftwaffe destroyed some 35 tanks, 14 guns and 50 motor vehicles of the Bryansk Front, slowing their progress. By the end of the first day the Soviets had failed to breach the first line.[21] While the 2nd Panzer Army was gradually being forced back, the Luftwaffe battled the VVS, destroying 94 Soviet aircraft on 13 July, including 50 Sturmoviks.

In the southern region of the battle the Luftwaffe's 1st Fliegerdivision maintained air superiority over the German 9th Army, dealing the Soviets some significant losses in aircraft between 13 and 16 July. After six days of heavy fighting the strength of the Luftwaffe began to wane. The 1 Fliegerdivision flew 74 intercept missions against the 868 sorties conducted by the 16th Air Army. Though the Soviets continued to lose in tactical air engagements, their overall presence in the air was dominant. The VVS helped General Bagramyan's 11th Guards Army achieve their breakthrough.[21] 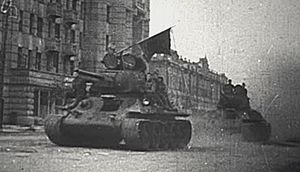 The battle was the bloodiest of the three major operations during the Battle of Kursk. Overall German losses suffered during the battle were 86,064 men KIA, MIA or WIA.[22] Casualties for the Red Army were 112,529 men killed, with a further 317,361 wounded.[23] Tank and assault gun losses for the Red Army were particularly high, with 2,586 vehicles destroyed or damaged during Kutuzov.[9] German tank losses are not available for this battle but Army Group Center is known to have lost 343 armoured fighting vehicles during both Citadel and Kutuzov.[22]

Some of the Soviet commanders were displeased with the results, complaining that an even greater victory might have been won. Said Marshal Rokossovsky: "Instead of encircling the enemy, we only pushed them out of the bulge. The operation would have been different if we had used our force for two heavy punches which met at Bryansk". Zhukov held a similar opinion.[24] Operation Kutuzov was successful in diverting German reserves earmarked for Operation Citadel and the Soviets reduced the Orel salient and inflicted substantial losses on the German army. The Sovient victory set the stage for the battle of Smolensk several weeks later. With Operation Kutuzov, the Soviets seized the strategic initiative, which they would hold through the remainder of the war.