Operation Ostra Brama (lit. Operation Gate of Dawn) was an armed conflict during World War II between the Polish Home Army and the Nazi German occupiers of Vilnius (Polish: Wilno). It began on 7 July 1944, as part of a Polish national uprising, Operation Tempest, and lasted until 14 July 1944. Though the Germans were defeated, the following day the Soviet Red Army entered the city and the Soviet NKVD proceeded to intern Polish soldiers and to arrest their officers. Several days later, the remains of the Polish Home Army retreated into the forests, and the Soviets were in control of the city.

From the Polish point of view, while the German defeat constitutes a Polish tactical victory, the ensuing destruction of the Polish units by the Soviets resulted in a strategic defeat, especially considering the goals of Operation Tempest. From the Soviet point of view, the operation was a complete success, as both the Germans and the Poles loyal to the London government suffered a defeat.

Operation 'Ostra Brama' was meant to be carried out during an expected state of confusion among German units in Wilno, who would be in fear of upcoming, overwhelming, Soviet forces. Polish command did not anticipate serious resistance and Polish soldiers were to breach German positions at the outskirts of city, move into the center and hold it until the Soviet army arrived. However, the Germans had fortified and occupied Wilno with a strong garrison. The plan for capturing Wilno resembled plans for the Warsaw Uprising.[citation needed]

On 12 June 1944 General Tadeusz Bór-Komorowski, Commander-in-Chief of the Home Army, issued an order to prepare a plan of liberating Wilno from German hands. The Home Army districts of Wilno and Navahrudak planned to take control of the city before the Soviets could reach it. The Commander of the Home Army District in Wilno, lieutenant colonel Aleksander Krzyżanowski "Wilk", decided to regroup all the partisan units in the northeastern part of Poland for the assault, both from inside and outside of the city.

On 26 June 1944 major Teodor Cetys (pseudonym "Sław") and lieutenant colonel Zygmunt Blumski ("Strychański") put forward a plan to "Wilk". Order number 1 "Ostra Brama" comprised an overall outline for an assault on Wilno. The Home Army forces of combined district Wilno and Navahrudak were intended to strike from the outside under the lead of lieutenant colonel "Poleszczuk".

According to plan, the main attack was prepared from eastern and south-eastern directions.

The second Red Army crosses the front as it stand in 1916 (at sideline of Sół and Smorgoń), uprising begins.

On 2 July the Polish Government in London gave the order to begin operation "Burza" in whole district Wilno and Navahrudak. It is believed to be a mistake, as Home Army units had been dispersed on a large terrain and took many objectives in parallel.

Faced with the Soviet Army approaching the city, "Wilk" made the decision to launch operations immediately on 7 July at dawn, one day before it had been originally scheduled. As a result of this change, the plans did not go well, as merely one of three battalions managed to get in position when the battle began. In spite of incomplete mobilization, around 4 thousand Polish partisans, supported by two anti-tank guns and a few mortars attacked Germans' lines. The Home Army had to fight against heavily armored, several times stronger and well protected German forces which had at their disposal tanks, anti-tanks, strong artillery and air cover provided from a nearby airfield in Porubanek.

The line between cemetery at Rosa and Bielmont was designated as an approach line. Polish soldiers had made no reconnaissance of German defenses, but pushed forward regardless. 1st and 6th battalions reached the first line of fortifications on the boundary of the village Lipówka and crossed the Wilno-Podbrodzie rail line track. They were soon repulsed to their initial positions by a German counterattack. Accordingly, the 9th Brigade got pinned down at blockhouses in Hrybiszek.

Partisans from the 3rd and 5th Battalions captured Góry, after bitter fighting, but they could not proceed under heavy fire. 3rd and 8th Battalions had been neutralized by the armored train in the vicinity of Kolonia Wileńska. The 3rd Brigade achieved the greatest success; after crossing Wileńka they reached Zarzecze and Trakt Batorego. They remained in their positions till 8 July and took up the offensive again, together with the approaching Soviet units. However, having incurred heavy losses under bombardment from air and artillery, they had to withdraw to Szwajcar.

In the meantime, a few hundred Home Army soldiers engaged in actions inside the city, primarily from the district "A"-Kalwaryjska, but most of the units failed to mobilize on time and did not take part in the fighting.

Fights in cooperation with the Red Army 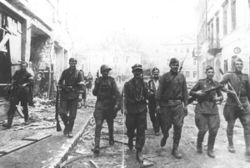 Soviet and Home Army soldiers on patrol together in the streets of Wilno on July 12th, 1944. While the Home Army and the Red Army cooperated in liberating the city from the Germans (July 7th - July 15th), after this was accomplished, on July 16th, the Soviets arrested and interned the Polish officers.

First units of the Red Army appeared at the battlefield in the middle of day (the 3rd Mechanized Corps) and engaged in frontal assault at 8 p.m. the same day without any success. The main forces arrived on 8 July, amounted for 100 thousand soldiers in total with the aid of few hundred tanks and air support. German garrison was reinforced on 10 July with few hundred paratroopers dropped in a vicinity of the city.

Fierce fight that unleashed on the streets between Nazis and combined forces of the Red Army and the Home Army lasted for a few days.

First contacts with Soviet units took place on 7 July, when a group formation "Pohoreckiego" met with the eastern ally. The commander of the 35th Tank Brigade made a first of many hostile moves from the Soviets (many were yet to come), ordering The Home Army to disband the unit. "Pohorecki" issued a word of getting back to a conspiracy. The 8th Brigade that had followed the order had been struggling for few days to regain an operational capacity.

The 2nd Battalion of 85th Infantry Regiment under "Jan" operated in district Kalwaryjska and succeeded in bringing the district under control. As of 8 July "Jan" started to fight Germans side by side with the Soviet 97th of Witebsk Infantry Division. In a charge at the hill Szeszkinie they were able to capture two enemies tanks. On 10 July, the 2nd Polish Battalion crossed the Wilia River and engaged in operations inside the city. The 1st Company of that Battalion were led by lieutenant Wacław Pietkiewicz "Mocny" to assault positions on streets Zamkowa and Wielka, and these experienced particular heavy fighting by the Orthodox Church. The 2nd Company, under orders of lieutenant Wacław Korzeniowski "Andrzej", fought at the foot of the hill Zamkowa, at streets Święta Anna, Sofianka, Baszta. The balance of assault titled in favor of Polish troops when German soldiers defending communication bunker surrendered it to the Polish. In the meantime, the 3rd Company of lieutenant Wacław Roszkowski "Biały" supported by Soviet tanks were assaulting at Mostowa Street, and then Zygmuntowska, Wileńska and Hills of Zakręt. The units in the center of city did not follow the way of other companies, as their failed to seize strategic points in the 'Sródmieście' (city center) of Wilno. It was 10 July when they achieved first successes.

The Germans fought house-to-house until they eventually arrived at the conclusion that their position had weakened so badly that they no longer can hold the city. As a result, 3,000 soldiers under Generalleutnant Reiner Stahel evaded the besiegers under the cover of darkness overnight on 13 July. However, they met Home Army soldiers under Major "Węgielny", and in a desperate stand at Krawczuny (modern Kriaučiūnai, a western suburb of Wilno near today's eldership of Pilaitė), they were badly beaten (though Stahel escaped capture and reached Warsaw a few days later). By 13 July, Wilno was in the hands of Polish and Soviet soldiers.

When the battle was over, the Soviet Command demanded immediate abandonment of Wilno by Polish soldiers. The Polish commander, Colonel Krzyżanowski (Wilk) ordered Polish units to set off for the Puszcza Rudnicka, while he set off for the headquarters of General Czerniachowski, commander of the 3rd Belorussian Front. Krzyżanowski was promised by Soviets that Polish partisans would be supplied with equipment without any political conditions. On 16 July, Krzyżanowski was once again invited to the headquarters of Czerniachowski to sign an agreement. However, this time, the Soviets arrested Krzyżanowski and his Chief of Staff, Major Teodor Cetys, as well as other Polish representatives at the same time in Bogusze. The wave of arrests also included the delegates of Polish Government in London.

The replacement commander of the Wilno district, Lieutenant Colonel Zygmunt Izydor Blumski and commander of the Navahrudak district Lieutenant Colonel Janusz Prawdzic Szlaski moved their units into the Forest of Rudnicka under constant fire from Soviet aircraft. Those Home Army soldiers that succeeded in this were commanded to make their way to Grodno, Białystok, or disperse into the local terrain. The Soviets, on the hand, enthusiastically carried out the hunt for the soldiers of their still official ally, as Soviets had never denounced Polish soldiers that status. In this Soviet action, over 5,700 Polish partisans were captured. Common soldiers were detained in Varniai (Polish Miedniki), whereas officers were sent to Ryazan.

A few decided to join the 1st Polish Army under General Zygmunt Berling (supported by communist puppet regime), while the majority were forcibly enlisted into the Soviet Red Army. However, those who refused to swear allegiance to the Soviet State were deported to Kaluga city in western Russia. There, they became part of the prisoner slave labor system so widespread in the Soviet Union at the end of the war until their general release in 1947.

Stripped of their officers and confused, Polish units occupied the forests surrounding Wilno. According to current research, roughly 6,000 soldiers and over 5,000 volunteers were stationed in that area on 18 July. These were gradually encircled and captured by the Soviets.

None of what happened in Wilno was disclosed to the general public in the West. Indeed, British media censored stories about these Soviet actions by decree of Minister of Information Brendan Bracken. The wartime allies of the Soviet Union, Great Britain and the United States, were not interested in revealing any news that would contradict with the general impression that the Soviet Union was a liberator of Europe from Nazi evil. Poland had already lost its eastern territories to Stalin at the Tehran Conference, but none of the Polish soldiers fighting in the Battle of Wilno knew about it.