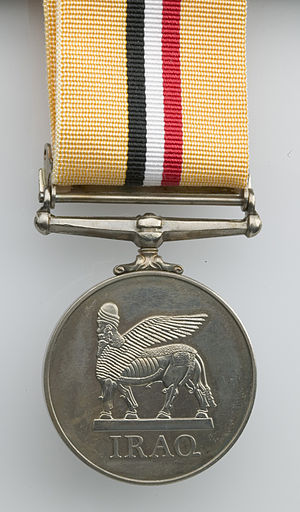 Operation Telic Campaign Medal for Service in Iraq. The medal is made of cupro-nickel and bears on the obverse the crowned image of the Queen. The reverse shows an ancient Assyrian Lamassu sculpture above the word Iraq. The 1.5 inches (38 mm) wide ribbon is a sand colour with three central stripes of black, white and red.

Operation Telic (Op TELIC) was the codename under which all of the United Kingdom's military operations in Iraq were conducted between the start of the Invasion of Iraq on 19 March 2003 and the withdrawal of the last remaining British forces on 22 May 2011. The bulk of the mission ended on 30 April 2009[1][2] but around 150 troops, mainly from the Royal Navy, remained in Iraq until 22 May 2011 as part of the Iraqi Training and Advisory Mission.[3][4] 46,000 troops were deployed at the onset of the invasion and the total cost of war stood at £9.24 billion in 2010.[5]

Some 9,500 of the British servicemen and women who deployed on Operation Telic for the invasion and its aftermath were reservists, the vast majority of them from the Territorial Army.

Notice that British forces were deploying to the region was given in three separate Commons statements by Geoff Hoon Secretary of State for Defence. On 7 January, the deployment of naval forces and Royal Marines was announced. 20 January saw the land forces deployment announced and 6 February the air forces. They were ready in time for hostilities to start on 19 March. When compared with the deployment of forces prior to the Gulf War things proceeded a great deal faster, with the slowest deploying elements taking 10 weeks to get from base to combat readiness in the theatre.

Telic means a purposeful or defined action. Unlike the United States who called their equivalent military deployment Operation Iraqi Freedom, the Ministry of Defence uses a computer to generate its names so that they carry no overtly political connotations. The meaning was initially unknown but as initial planning took place over the Christmas 2002 period, the term became jokingly known amongst personnel as a backronym for Tell Everyone Leave Is Cancelled.[6]

The force was commanded by a three-star tri-service headquarters. The commander of the operation was Air Chief Marshal Brian Burridge, with Major General Peter Wall acting as his Chief of Staff. The headquarters was situated at CENTCOM headquarters in Qatar. The three services each had two-star commanders leading operations. 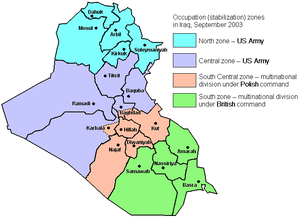 Occupation zones of Iraq after the invasion.

On 11 July 2003, 1st Armoured Division handed control over south-east Iraq to 3rd Mechanised Division, Major General Wall was succeeded by Major General Graeme Lamb as commander of British ground forces in Iraq. Unlike the invasion period, by then there was a substantial presence from many nations other than America, Britain, Australia and Poland. In addition to British troops, 3rd Division now commanded Italian, Dutch, Danish, Czech, Lithuanian, Norwegian and New Zealand forces. 3rd Division handed over a new composite divisional headquarters on 28 December 2003. Major General Andrew Stewart took over from General Lamb as commander of British forces.

After the end of major operations, the main components of the British forces changed greatly. 3 Commando Brigade was withdrawn in early May and 16 Air Assault Brigade left later in the same month apart from a couple of infantry battalions. 7 Armoured Brigade remained until relieved by 19 Mechanised Brigade at the same time as 3rd Division took over from 1st Division. 102 Logistics Brigade was relieved by 101 Logistic Brigade in late May. Most of the RAF aircraft left the area with a few retained for patrols over Iraq and support of ground forces. British naval forces also returned to more usual levels, with two surface combatants, a tanker and a repair ship present in early July.

In May 2005, 4 Armoured Brigade was replaced by 12 Mechanised Brigade with the handover of responsibility taking place on 30 May.

1 Mechanised Brigade provided HQ and troops for Op TELIC 10, deploying to Iraq in June 2007. During that tour, both the PJCC and Basra Palace were handed back to Iraqi control. They handed over to 4th Mechanised Brigade on 1 December 2007.

For full details about the UK's contribution, please see the Operation Telic order of battle

The conflict saw over 100 fixed-wing aircraft and over 100 rotary-wing aircraft of virtually every type in the British inventory deployed. It also saw a 33 ship fleet, which was the largest taskforce deployed by the UK since the Falklands War. Some 120 Challenger 2 main battle tanks, 150 Warrior infantry fighting vehicles, 32 AS-90 self-propelled 155 mm howitzers and 36 105 mm towed howitzers were deployed with the land forces, with reconnaissance vehicles and everything else that makes a modern mechanised and armoured force function.

A total of 179[11] British Armed Forces personnel died serving on Operation Telic between the start of the campaign in March 2003 and the end of operations in July 2009; 136 in hostile incidents and the remaining 43 under non-hostile circumstances. Full non-fatal casualty records are currently only available for the period after 1 January 2006. From that date, 3,598 British personnel were wounded, injured or fell ill (315 wounded in action); 1,971 of whom required aeromedical evacuation.[12] However, these totals are likely to rise significantly as and when full records for 2003 to 2006 become available. By 11 March 2007, more than 2,100[13] soldiers had returned from Iraq suffering from some form of mental illness, including PTSD.

The British television film The Mark of Cain depicted service of a fictional British Army unit, the 1st Battalion Northdale Rifles in Operation Telic, just after the end of combat operations and in the first stages of the occupation. A stage production based on the Scottish Black Watch Regiment was also created, drawing on experiences of veterans of the war. It was played out to much acclaim throughout Scotland in 2006.