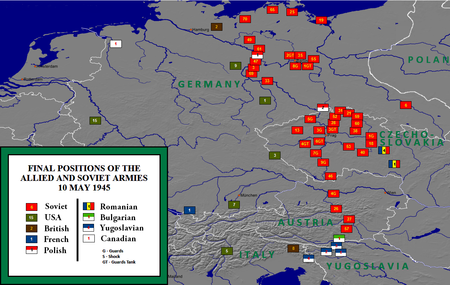 Allied army positions in central Europe on 10 May 1945. The Soviet numerical superiority in relation to the Western Allies was roughly 4:1 in men and 2:1 in tanks at the end of hostilities in Europe.[1]

Operation Unthinkable was a code name of two related plans of a conflict between the Western Allies and the Soviet Union. Both were ordered by British Prime Minister Winston Churchill in 1945 and developed by the British Armed Forces' Joint Planning Staff at the end of World War II in Europe.

The first of the two assumed a surprise attack on the Soviet forces stationed in Germany in order to "impose the will of the Western Allies" on the Soviets. "The will" was qualified as "square deal for Poland"[2] (which probably meant enforcing the recently signed Yalta Agreement). When the odds were judged "fanciful", the original plan was abandoned. The code name was used instead for a defensive scenario, in which the British were to defend against a Soviet drive towards the North Sea and the Atlantic following the withdrawal of the American forces from the continent.

The study became the first Cold War-era contingency plan for war with the Soviet Union.[3] Both plans were highly secret at the time of their creation and it was not until 1998 that they were made public.[4]

The initial primary goal of the operation was declared as follows: "to impose upon Russia the will of the United States and the British Empire. Even though 'the will' of these two countries may be defined as no more than a square deal for Poland, that does not necessarily limit the military commitment".[2] The word "Russia" is used heavily throughout the document, as during the Imperial period the term was used to refer to the Russian Empire, with which the USSR was almost coterminous.

The Chiefs of Staff were concerned that given the enormous size of Soviet forces deployed in Europe at the end of the war, and the perception that the Soviet leader Joseph Stalin was unreliable, there existed a Soviet threat to Western Europe. The Soviet numerical superiority was roughly 4:1 in men and 2:1 in tanks at the end of hostilities in Europe.[1] The Soviet Union had yet to launch its attack on Japanese forces, and so one assumption in the report was that the Soviet Union would instead ally with Japan if the Western Allies commenced hostilities.

The hypothetical date for the start of the Allied invasion of Soviet-held Europe was scheduled for 1 July 1945.[1] The plan assumed a surprise attack by up to 47 British and American divisions in the area of Dresden, in the middle of Soviet lines.[1] This represented almost half of the roughly 100 divisions (approximately 2.5 million men) available to the British, American and Canadian headquarters at that time.[4]

The plan was taken by the British Chiefs of Staff Committee as militarily unfeasible due to a three-to-one superiority of Soviet land forces in Europe and the Middle East, where the conflict was projected to take place. The majority of any offensive operation would have been undertaken by American and British forces, as well as Polish forces and up to 100,000 German Wehrmacht soldiers. Any quick success would be due to surprise alone. If a quick success could not be obtained before the onset of winter, the assessment was that the Allies would be committed to a protracted total war. In the report of 22 May 1945, an offensive operation was deemed "hazardous".

In response to an instruction by Churchill of 10 June 1945, a follow-up report was written concerning "what measures would be required to ensure the security of the British Isles in the event of war with Russia in the near future".[5] United States forces were relocating to the Pacific for a planned invasion of Japan, and Churchill was concerned that this reduction in supporting forces would leave the Soviets in a strong position to take offensive action in Western Europe. The report concluded that if the United States focused on the Pacific Theatre, Great Britain's odds "would become fanciful."[6]

The Joint Planning Staff rejected Churchill's notion of retaining bridgeheads on the continent as having no operational advantage. It was envisaged that Britain would use its air force and navy to resist, although a threat from mass rocket attack was anticipated, with no means of resistance except for strategic bombing.

By 1946 tensions and conflicts were developing between Allied-occupied and Soviet-occupied areas of Europe. These were seen as being potential triggers for a wider conflict. One such area was the Julian March (which was applied to an area of southeastern Europe, today split among Croatia, Slovenia, and Italy), and on 30 August 1946 informal discussions took place between the British and US Chiefs of Staff concerning how such a conflict could develop and the best strategy for conducting a European war.[7] Again the issue of retaining a bridgehead on the continent was discussed, with Dwight D. Eisenhower preferring a withdrawal to the Low Countries, rather than Italy, for their proximity to the United Kingdom.