From Infogalactic: the planetary knowledge core
Jump to: navigation, search
For other uses, see Opinion (disambiguation). 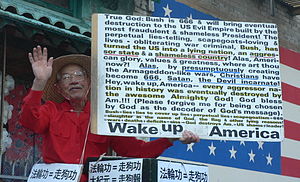 In general, an opinion is a judgment, viewpoint, or statement about matters commonly considered to be subjective.

What distinguishes fact from opinion is that facts are verifiable, i.e. can be objectively proven to have occurred. An example is: "United States of America was involved in the Vietnam War" versus "United States of America was right to get involved in the Vietnam War". An opinion may be supported by facts, in which case it becomes an argument, although people may draw opposing opinions from the same set of facts. Opinions rarely change without new arguments being presented. It can be reasoned that one opinion is better supported by the facts than another by analyzing the supporting arguments.[1] In casual use, the term opinion may be the result of a person's perspective, understanding, particular feelings, beliefs, and desires. It may refer to unsubstantiated information, in contrast to knowledge and fact.

Collective or professional opinions are defined as meeting a higher standard to substantiate the opinion. (see below)

In economics, other social sciences and philosophy, analysis of social phenomena based on one's own opinion(s) is referred to as normative analysis (what ought to be), as opposed to positive analysis, which is based on scientific observation (what materially is or is empirically demonstrable).

In contemporary usage, public opinion is the aggregate of individual attitudes or beliefs held by a population (e.g., a city, state, or country), while consumer opinion is the similar aggregate collected as part of marketing research (e.g., opinions of users of a particular product or service). Typically, because the process of gathering opinions from all individuals are difficult, expensive, or impossible to obtain, public opinion (or consumer opinion) is estimated using survey sampling (e.g., with a representative sample of a population).

In some social sciences, especially political science and psychology, group opinion refers to the aggregation of opinions collected from a group of subjects, such as members of a jury, legislature, committee, or other collective decision-making body. In these situations, researchers are often interested in questions related to social choice, conformity, and group polarization.

"The scientific opinion" (or scientific consensus) can be compared to "the public opinion" and generally refers to the collection of the opinions of many different scientific organizations and entities and individual scientists in the relevant field. Science may often, however, be "partial, temporally contingent, conflicting, and uncertain"[2] so that there may be no accepted consensus for a particular situation. In other circumstances, a particular scientific opinion may be at odds with consensus.[2] Scientific literacy, also called public understanding of science, is an educational goal[3] concerned with providing the public with the necessary tools to benefit from scientific opinion.

A "legal opinion" or "closing opinion" is a type of professional opinion, usually contained in a formal legal-opinion letter, given by an attorney to a client or a third party. Most legal opinions are given in connection with business transactions. The opinion expresses the attorney's professional judgment regarding the legal matters addressed. A legal opinion is not a guarantee that a court will reach any particular result.[4] However, a mistaken or incomplete legal opinion may be grounds for a professional malpractice claim against the attorney, pursuant to which the attorney may be required to pay the claimant damages incurred as a result of relying on the faulty opinion.

A "judicial opinion" or "opinion of the court" is an opinion of a judge or group of judges that accompanies and explains an order or ruling in a controversy before the court, laying out the rationale and legal principles the court relied on in reaching its decision.[5] Judges in the United States are usually required to provide a well-reasoned basis for their decisions and the contents of their judicial opinions may contain the grounds for appealing and reversing of their decision by a higher court. Judicial opinions are discussed further in the articles on common law and precedent.

An "editorial opinion" is the stated opinion of a newspaper or of its publisher, as conveyed on the editorial page.