From Infogalactic: the planetary knowledge core
Jump to: navigation, search
For other places with the same name, see Opole (disambiguation).

listen) (German: Oppeln, Silesian German: Uppeln, Silesian: Uopole) is a city in southern Poland on the Oder River (Odra). It has a population of 125,992 (June 2009) and is the capital of the Opole Voivodeship and, also the seat of Opole County. Today, many German Upper Silesians and Poles of German ancestry live in the Opole region; in the city itself, however, Germans make up less than 3% of the population. It was also the capital of the historical region of Upper Silesia.

The name "Opole" likely originated from the medieval Slavic term for a group of settlements.[1]

Opole's history begins in the 8th century. At this time, according to the archeological excavations,[2] the first Slavic settlement was founded on the Ostrówek - the northern part of the Pasieka island in the middle of the Odra river. In the early 10th century it developed into one of the main gróds of the Slavic Opolanie. At the end of the century Silesia became part of Poland and was ruled by the Piast dynasty; the land of the pagan Opolanie was conquered by Duke Mieszko I in 992. From the 11th-12th centuries it was also a castellany. After the death of Duke Władysław II the Exile, Silesia was divided in 1163 between two Piast lines- the Wrocławska line in Lower Silesia and the Opolsko-Raciborska of Upper Silesia. Opole would became a duchy in 1172 and would share much in common with the Duchy of Racibórz, with which it was often combined. In 1281 Upper Silesia was divided further between the heirs of the dukes. The Duchy of Opole was temporarily reestablished in 1290.

In the early 13th century, Duke Casimir I of Opole decided to move the settlement from the Pasieka island into the right shore of the Odra river (since the 17th century it is the old stream bed of Odra known as Młynówka). All of the inhabitants had to be moved in order to make place for the duke's new castle that was eventually built in the place of the old city.[3] Former inhabitants of Ostrówek together with German merchants that immigrated here from the West, received first town rights probably as early as around, 1217 though this date is disputed.[4] Opole received German town law in 1254, which was expanded with Neumarkt law in 1327 and Magdeburg rights in 1410. Opole developed during the rule of duke Bolko I of Opole. In this time the castle was finally completed and new buildings, including the city walls and the Holy Cross church, were constructed. Along with most of Silesia, in 1327 the Duchy of Opole came under the sovereignty of the Kingdom of Bohemia, itself part of the Holy Roman Empire. In 1521 the Duchy of Racibórz (Ratibor) was inherited by the Duchy of Opole, by then also known by its German equivalent - Oppeln. The second castle of Opole was probably founded in the 14th century by duke Władysław Opolczyk, though some sources claim that it was originally a wooden stronghold of Opole's castellan dating into 12th century.[5]

Opole is one of the warmest cities in Poland. The national all time heat record was measured in Prószków, near Opole.

In the Habsburg Monarchy

With the death of King Louis II of Bohemia at the Battle of Mohács, Silesia was inherited by Ferdinand I, placing Opole under the sovereignty of the Habsburg Monarchy of Austria. The Habsburgs took control of the region in 1532 after the last Piast duke of Opole - Jan II the Good died. In those days the city was still mainly Polish-speaking (around 63%), with other nationalities represented mainly by Germans, Czechs and Jews. The last two dukes of Opole: Nicholas II of Niemodlin and Jan II the Good did not know German at all.[6]

Beginning in 1532 the Habsburgs pawned the duchy to different rulers including several monarchs of Poland (see Dukes of Opole). With the abdication of King John II Casimir of Poland as the last Duke of Opole in 1668, the region passed to the direct control of the Habsburgs. At the beginning of the 18th century the German population of Opole was estimated at around 20%.[7]

King Frederick II of Prussia conquered most of Silesia from Austria in 1740 during the Silesian Wars; Prussian control was confirmed in the Peace of Breslau in 1742. During the Prussian rule the ethnic structure of the city began to change. In the early 20th century the number of Polish and bilingual citizens of Opole, according to the official German statistics, varied from only 25% to 31%.[8] From 1816–1945 Opole was the capital of Regierungsbezirk Oppeln within Prussia. The city became part of the German Empire during the unification of Germany in 1871. 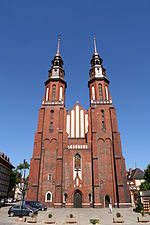 After the defeat of Imperial Germany in World War I, a plebiscite was held on 20 March 1921 in Opole to determine if the city would be in the Weimar Republic or become part of the Second Polish Republic. 20,816 (94.7%) votes were cast for Germany, 1,098 (5.0%) for Poland, and 70 (0.3%) votes were declared invalid. Voter participation was 95.9%. Results of the plebiscite in the Opole-Land county were different, with 30% of population voting for Poland.

OPPELN after the plebiscite, under international ruling in August 1921

On 15 February 1941 and 26 February 1941, two deportation transports with 2,003 Jewish men, women and children on board left Vienna Aspang Station for the ghetto which had been set up in Opole. By March 1941, 8,000 Jews were deported to Opole. From May 1941, 800 men capable of work were deployed as forced labourers in Deblin. The "Liquidation" of the Opole ghetto began in the spring 1942. A transport to Belzec extermination camp left on 31 March 1942 and deportations to Sobibor followed in May and October 1942. Of the 2,003 Viennese Jews, only twenty-eight are known to have survived.

After the end of the Second World War in 1945, Opole was transferred from Germany to Poland according to the Potsdam Conference, and given its original Slavic name of Opole. Opole became part of the Katowice Voivodeship from 1946–1950, after which it became part of the Opole Voivodeship. Unlike other parts of the so-called Recovered Territories, Opole and the surrounding region's indigenous population remained and was not forcibly expelled as elsewhere. Over 1 million Silesians who considered themselves Poles or were treated as such by the authorities due to their language and customs were allowed to stay after they were verified as Poles in a special verification process. It involved declaring Polish nationality and an oath of allegiance to the Polish nation.[9]

In the later years however many of them left to West Germany to flee the communist Eastern Bloc (see Emigration from Poland to Germany after World War II). Today Opole, along with the surrounding region, is known as a centre of the German minority in Poland that recruits mainly from the descendants of the positively verified autochthons. In the city itself however only 2.46% of the inhabitants declared German nationality according to the last national census of 2002.[10]

In the early 20th century the amount of Polish and bilingual citizens of Opole, according to the official German statistics, varied from 25 to 31%.[8] 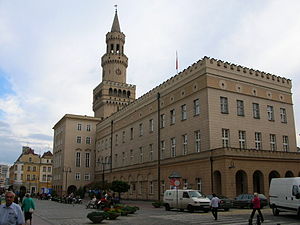 ¹ First census of the city

Opole - a view of the city centre 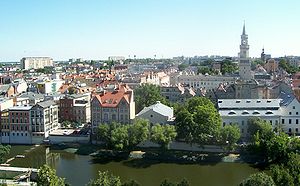 Alongside German and Polish, many citizens of Opole-Oppeln before 1945 used a strongly German-influenced Silesian dialect (sometimes called wasserpolnisch or wasserpolak). Because of this, the post-war Polish state administration after the annexation of Silesia in 1945 did not initiate a general expulsion of all former inhabitants of Opole, as was done in Lower Silesia, for instance, where the population almost exclusively spoke the German language. Because they were considered "autochthonous" (Polish), the Wasserpolak-speakers instead received the right to remain in their homeland after declaring themselves as Poles. Some German speakers took advantage of this decision, allowing them to remain in their Oppeln, even when they considered themselves to be of German nationality. The city surroundings currently contain the largest German and Upper Silesian minorities in Poland. However, Opole itself it is only 2.46% German.[10] (See also Germans of Poland.) 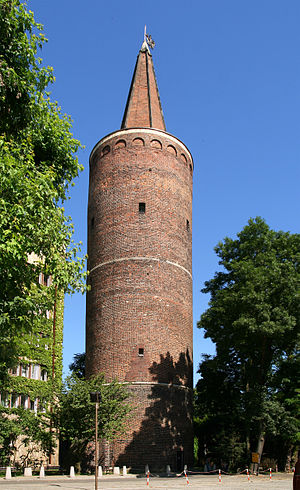 Piast tower, built under Bolko I of Opole, circa 1300 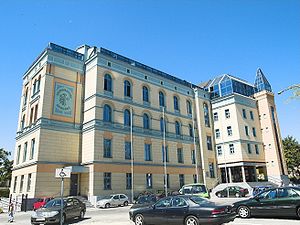 The building of Collegium Maius of Opole University 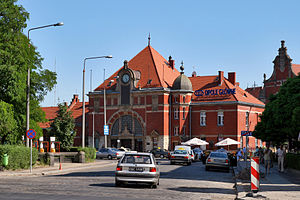 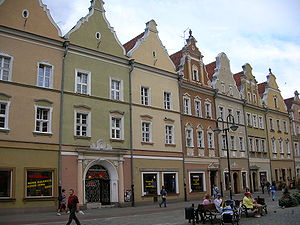 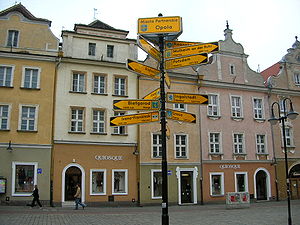