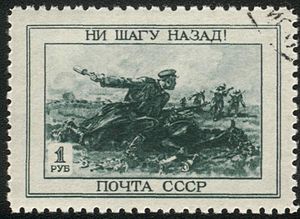 Soviet postage stamp with the famous phrase "Not One Step Backwards".

Order No. 227 issued on July 28, 1942 was an order issued by Joseph Stalin who was acting as the People's Commissar of Defence. It is famous for its line "Not one step back!" (Russian: Ни шагу назад! / Ni shagu nazad!), which became a slogan of Soviet resistance against the German invasion.[1]

During the first part of the Great Patriotic War, the Soviets experienced heavy losses along with mass retreat and desertion. Stalin released order No. 227 to reestablish discipline in the Soviet Army against Nazi Germany.

The order itself has a very passionate preamble.

“Enemy throws to battle new forces and doesn’t encounter its heavy losses, crawls to into Soviet lands, capturing new regions, havocs and destroys our cities and villages, rapes and kills Soviet population… German occupant forces by all means want to take Kuban and Northern Caucasus rich in bread and oil… Units of South front led by scaremongers left Rostov and Novocherkassk without serious resistance and without orders from Moscow, they covered their colours with shame.

"Population of our country loves and respects the Red Army, but now people are disappointed that the Red Army leaves our people to be enslaved by German oppressors and runs further to the east. Some not so smart people comfort themselves by conversations that we can run further to the east, because we have a lot of land, many people and we’ll always have plenty of bread. They use this to justify their infamous actions on the fronts.

"… but further retreat to the east means to sentence to death our people and our Motherland, every bit of our land given to the enemy will enforce him and will weaken our defense, our Motherland.”

"...The Supreme General Headquarters of the Red Army commands:

1. Military councils of the fronts and first of all front commanders should:

a) Unconditionally eliminate retreat moods in the troops and with a firm hand bar propaganda that we can and should retreat further east, and that such retreat will cause no harm;

b) Unconditionally remove from their posts and send to the High Command for court martial those army commanders who have allowed unauthorized troop withdrawals from occupied positions, without the order of the Front command.

c) Form within each Front from one up to three (depending on the situation) penal battalions (800 persons) where commanders and high commanders and appropriate commissars of all service arms who have been guilty of a breach of discipline due to cowardice or bewilderment will be sent, and put them on more difficult sectors of the front to give them an opportunity to redeem by blood their crimes against the Motherland.

2. Military councils of armies and first of all army commanders should;

a) Unconditionally remove from their offices corps and army commanders and commissars who have accepted troop withdrawals from occupied positions without the order of the army command, and route them to the military councils of the fronts for court martial;

b) Form within the limits of each army 3 to 5 well-armed defensive squads (up to 200 persons in each), and put them directly behind unstable divisions and require them in case of panic and scattered withdrawals of elements of the divisions to shoot in place panic-mongers and cowards and thus help the honest soldiers of the division execute their duty to the Motherland;

c) Form within the limits of each army up to ten (depending on the situation) penal companies (from 150 to 200 persons in each) where ordinary soldiers and low ranking commanders who have been guilty of a breach of discipline due to cowardice or bewilderment will be routed, and put them at difficult sectors of the army to give them an opportunity to redeem by blood their crimes against the Motherland.

3. Commanders and commissars of corps and divisions should;

a) Unconditionally remove from their posts commanders and commissars of regiments and battalions who have accepted unwarranted withdrawal of their troops without the order of the corps or division commander, take from them their orders and medals and route them to military councils of fronts for court martial;

b) Render all help and support to the defensive squads of the army in their business of strengthening order and discipline in the units.

This order is to be read in all companies, cavalry squadrons, batteries, squadrons, commands and headquarters."

Marshal of the Soviet Union Aleksandr Vasilevsky wrote in his book The Matter of my Whole Life: “…Order N 227 is one of the most powerful document of war years due to patriotic and emotional content… the document was motivated by rough and dark times… while reading it we were thinking to ourselves if we do everything it takes to win the battle.”

No commander had the right to retreat without an order. Anyone who did so was subject to a military tribunal of the corresponding seniority level.

Order No. 227 established that each Front must create 1 to 3 penal battalions (штрафбат, штрафной батальон, shtrafbat, shtrafnoy battalion) of up to 800 middle class commanders and high class commanders accused of disciplinary problems, which were sent to the most dangerous sections of the front lines.[1] Each Front had to create penal companies for privates and NCOs. By the end of 1942 there were 24,993 people serving in the penal battalions, which increased to 177,694 people in 1943. The number decreased over the next two years to 143,457 and 81,766 people in 1944 and 1945, respectively, for a total of 427,910 soldiers who were assigned to penal battalions during the course of the war.[2]

The order also directed that each Army must create "blocking detachments" (barrier troops (заградотряд, заградительный отряд)) which would capture or shoot "cowards" and fleeing panicked troops at the rear.[1]

Both measures were cited in the preamble of the order as having been successfully used by the Germans during their winter retreat.

The requirement for Armies to maintain companies of barrier troops was withdrawn after just three months, on October 29, 1942. Intended to galvanize the morale of the hard-pressed Soviet Army and emphasize patriotism, it had a generally detrimental effect and was not consistently implemented by commanders who viewed diverting troops to create barrier units as a waste of manpower, so by October 1942 the idea of regular blocking units was quietly dropped.[3] By 20 November 1944 the blocking units were officially disbanded.[2]