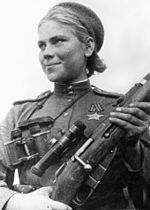 Roza Shanina, a recipient of the Order of Glory 2nd and 3rd classes

The Order of Glory (Russian: Орден Славы) was a military decoration of the Soviet Union established by Decree of the Presidium of the Supreme Soviet on November 8, 1943.[1] It was awarded to non-commissioned officers of the Red Army as well as to junior lieutenants of the air force, for bravery in the face of the enemy. It became defunct with the dissolution of the Soviet Union. In 1992, the Cross of St. George was revived to serve the same purpose of rewarding bravery in NCO's and enlisted service personnel.[2]

The original statute from the 1943 decree establishing the Order stated that: "the Order of Glory is awarded to privates and sergeants of the Red Army, and to aviation second-lieutenants, who displayed glorious feats of bravery, courage and fearlessness in the battle for the Soviet Motherland.[1]"

The Decree of the Presidium of the Supreme Soviet of the USSR of October 7, 1951 amended the ranks to read: "privates, corporals and sergeants" in lieu of "Sergeant" and "junior lieutenant" in lieu of "second lieutenant" for aviators.[1]

The Order of Glory, which was modelled closely after the Tsarist Cross of St. George was divided into three classes. A person initially received the award third class, and would subsequently be promoted to higher classes for further acts of bravery; one who received all three classes was called a "Full Cavalier of the Order of Glory" (Russian: "полный кавалер ордена Славы"). Approximately 2600 individuals, including four women, attained the Full Cavalier status.

Below are the specific award criteria for both ground troops and aviators.[1]

The Order is suspended by a ring through the award's suspension loop to a standard Russian pentagonal mount covered by a 24mm wide silk moiré ribbon of St George.

The individuals below were recipients of the Order of Glory.[4][5]

Recipients of the Order 2nd and 3rd classes

Recipients of the Order 3rd class