The Order of Honour (Russian: Орден Почёта) is a state order of the Russian Federation established by Presidential Decree № 442 of March 2, 1994[1] to recognise high achievements in government, economic, scientific, sociocultural, public, sport and charitable activities. Its statute was amended by decree № 19 of January 6, 1999[2] and more lately by decree № 1099 of January 7, 2010[3] which defined its present status. The Russian Federation Order provides continuity from the Soviet Union's identically named Order. The Soviet Order of Honor was denoted by a gray yellow edged ribbon.

The Order of Honour is awarded to citizens of the Russian Federation: [1]

The Order of Honour is worn on the left side of the chest and when in the presence of other medals and orders of the Russian Federation, is situated immediately after the Order "For Naval Merit".[4] 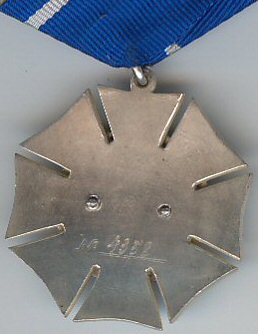 Reverse of the Order of Honour

The Order is struck from silver and covered with enamels, it is shaped as a 42 mm in diameter octagonal cross enamelled in blue on its obverse except for a 2 mm wide band along its entire outer edge which remains bare silver. The obverse bears a white enamelled central medallion bordered by a silver laurel wreath, the medallion bears the silver state symbol of the Russian Federation. On the otherwise plain reverse, two rivets and the award serial number at the bottom.[3]

The Order of Honour is suspended by a ring through the badge's suspension loop to a standard Russian pentagonal mount covered by a 24 mm wide overlapping blue silk moiré ribbon with a 2,5 mm wide white stripe situated 5 mm from the ribbon's right edge.[3]

The individuals below are recipients of the Order of Honour".[5][6] 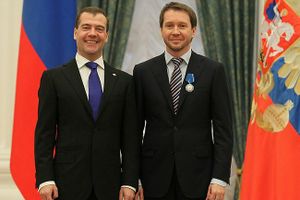 Evgeny Mironov, Artistic Director of the Federal State Institution of Culture "The State Theatre of Nations," being awarded the Order of Honour by President Dmitry Medvedev on December 29, 2011. (Photo www.kremlin.ru) 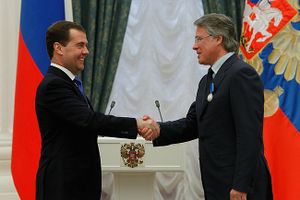 Anatoly Alexandrov, Rector of the "Bauman" Moscow State Technical University being presented with the Order of Honour by President Dmitry Medvedev on May 3, 2012. (Photo www.kremlin.ru)