The Order "For Naval Merit" is worn on the left side of the chest and when worn in the presence of other medals and Orders of the Russian Federation, it is located immediately after the Order "For Military Merit".[2]

The badge of the Order is in the shape of a 40 mm wide four pointed cross made of enamelled silver. Two anchors cross behind a central medallion bearing the coat of arms of the Russian Federation. The central medallion edge is enamelled in blue and bears the inscription "FOR NAVAL MERIT" (Russian: "ЗА МОРСКИЕ ЗАСЛУГИ").[3]

The Order "For Naval Merit" is suspended by a ring through the badge's suspension loop to a standard Russian pentagonal mount covered by an overlapping 24 mm wide white silk moiré ribbon with three central 2 mm wide longitudinal blue stripes separated by 3 mm.[3] 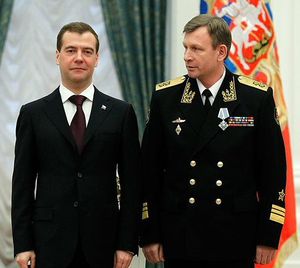 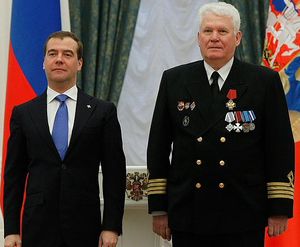 Gennady Antokhin, captain of the icebreaker "FESCO", wearing his Order "For Naval Merit" with President Dmitry Medvedev on May 3, 2012. (Photo www.kremlin.ru) 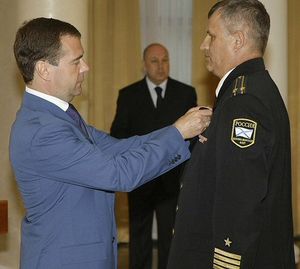 Captain 2nd grade Viktor Lapshin being decorated with the Order "For Naval Merit" by President Dmitry Medvedev on July 13, 2009 for distinction in the fight against Somali pirates. (Photo www.kremlin.ru)

The individuals listed below were recipients of the Order "For Naval Merit".[4][5]