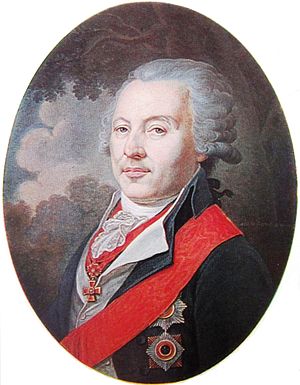 The Imperial Order of Saint Alexander Nevsky was an order of chivalry of the Russian Empire first awarded on 1 June [O.S. 21 May] 1725 by Empress Catherine I of Russia.[1]

The introduction of the Imperial Order of Saint Alexander Nevsky was envisioned by Emperor Peter I of Russia for rewarding military bravery in battle. However, he died before he could create the order. It was established by Empress Catherine I of Russia, in memory of the deeds of Saint Alexander Nevsky, patron Saint of the Russian capital of Saint Petersburg, for defending Russia against foreign invaders. The order was originally awarded to distinguished Russian citizens who had served their country with honor, mostly through political or military service.[2]

It was first awarded on the occasion of the wedding of Grand Duchess Anna Petrovna of Russia and Charles Frederick, Duke of Holstein-Gottorp in 1725. A dozen guests received the reward, and the order quickly fell far behind the Order of Saint Andrew and the Order of Saint Catherine in prestige.[2][1]

The Empress Catherine complained about the situation and by September 1725, she took it upon herself to determine who would receive the award. The Order of Saint Alexander was granted the highest esteem and was not usually bestowed upon people below the rank of Lieutenant-General or an equal political status. Additionally it was , including Polish King Augustus II the Strong and King Frederick IV of Denmark–Norway[1]

The Order of Saint Alexander Nevsky was abolished after the 1917 Russian Revolution, along with all other orders and titles of the Russian Empire.

In 1942, the Soviet Union revived the order as a purely military decoration and renamed it the more secular Order of Alexander Nevsky, and the Russian Federation revived it in 2010.

In 2010, researchers in Saint Petersburg and Moscow published a book of all the names of the recipients of the original order. The combined number of honorees spanning the years 1725 to 1917 totaled 3,674.[5]