From Infogalactic: the planetary knowledge core
Jump to: navigation, search
This article is about the Russian Order. For the Barbados Order, see Order of Barbados. For the Eastern Orthodox Christian Order, see Archons of the Ecumenical Patriarchate. 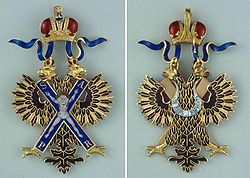 The "Jewel" (Badge) of the Imperial Order of St. Andrew, obverse (left) and reverse (right)

The Order was established in 1698 by Tsar Peter the Great, in honour of Saint Andrew, the first apostle of Jesus and patron saint of Russia. It was bestowed in a single class and was only awarded for the most outstanding civilian or military merit.

Peter learned of the practice of bestowing awards from his travels in the West during the Great Embassy. In the past, service to the Russian state was rewarded with money or large estates. He witnessed first hand the awards ceremonies for England's Order of the Garter and Austria's Order of the Golden Fleece and noticed the loyalty and pride of the awardees. It also saved the state land and money. 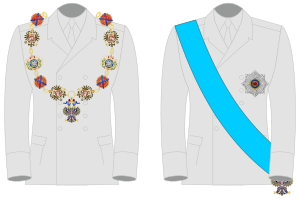 Decoration with collar (left) and with sash and star (right)

The insignia of the order consisted of:

The insignia of order could be awarded "with diamonds" as a special distinction. Saint Andrew's Cathedral in Saint Petersburg was the chapter church of this order of chivalry. 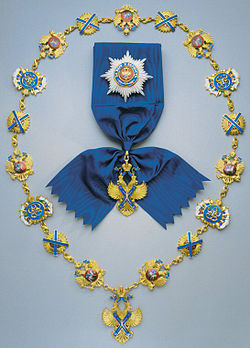 An order with the same name but with different insignia and statutes was first unofficially re-established by the Orthodox Church of Russia on December 27, 1988. The order was officially re-instated as the highest Russian civilian and military award by Presidential Decree №757 on June 1, 1998.[2] The Order's award criteria were modified by Presidential Decree 1099 of September 7, 2010.[3]

Statute of the Order

The Order of St. Andrew the Apostle the First-Called is awarded to prominent statesmen and public figures, eminent representatives of science, culture, the arts and various industries for exceptional services, for promoting the prosperity, grandeur and glory of Russia.[4]

The Order may also be awarded to foreign heads of states for outstanding service to the Russian Federation.[4]

Unlike the original Imperial institution, the modern Order does not have special robes nor strict rules regulating its wearing. The collar, the sash and the star of the Imperial Order were only worn with uniform or full evening dress; the insignia are nowadays worn on lounge suit and at least one recipient was seen wearing the order dressed in lounge suit without a tie, something that would be unheard of during the Imperial era. The collar of the original Order was worn across the shoulders; modern recipients tend to wear it as a chain around the neck.

The design of the modern Order of St. Andrew has changed very little from the imperial design. It consists of:

The colour of the sash differs from the colour of the Imperial era, and resembles the shade of the sash of the British Order of the Garter. Members of the military division of the Order have crossed swords added below the crown above the two eagles' heads. On the reverse of the eagle on a white ribbon the motto of the Order appears inscribed in gold letters: «За веру и верность» ("For faith and loyalty").[4]

Among the recipients of the Order after its re-establishment were:[5]