From Infogalactic: the planetary knowledge core
Jump to: navigation, search
For other uses, see Order of St. George (disambiguation).
Not to be confused with Cross of St. George.

The Order of Saint George (Russian: Орден «Святого Георгия») is the highest purely military decoration of the Russian Federation. Originally established November 26, 1769 by Empress Catherine the Great[3] it was revived on August 8, 2000 by Decree №1463[2] of the President of Russia. The award criteria were amended on September 7, 2010 by Presidential Decree 1099.[4]

Statute of the Order

File:Georgi Pulevski.jpg
Georgi Pulevski wearing a cross of the Order of Saint George, conferred for his part in the Russo-Turkish War (1877–78) 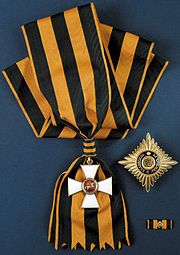 The Order of Saint George is awarded to highest and senior military officers for the conduct of military operations to protect the Fatherland from attack by an external enemy which resulted in the complete defeat of the enemy, for the execution of combat and other operations in other states aimed at restoring international peace and security, or for being a model of military science with feats that exemplify military prowess; the Order is also conferred upon officers who were previously awarded state awards of the Russian Federation for distinction in combat.[5]

Description of the Order

The Order of Saint George is divided into four classes, from the First Class to the Fourth class; the highest degree being the Order First class. The four classes are awarded sequentially from the fourth to the first. These four classes are individually identified by the size and manner of wearing the two principal insignia of the Order, the cross and the star.[5]

Proper wear of the Order of Saint George insignia, fourth class at left to first class at right 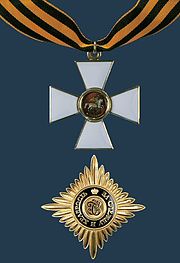 Star: A four-pointed silver gilt star with a gold central medallion bearing the cipher of Saint George "SG" topped by a crown and surrounded by a black enamelled band bearing the motto of the order "For Service and Bravery" ("Za Sluzhbu i Khrabrost"). The star is worn on the left breast for both the Order first and second classes.[5]

Ribbon: The ribbon of the Order of Saint George is orange with three black stripes, commonly called "George's Ribbon". It symbolises fire and gunpowder: the Russian "colors of military glory", and is also thought to be derived from the colours of the original Russian imperial coat of arms (black eagle on a golden background). It was subsequently associated to the colors of the Russian Guard units.[5]

The ribbon bar for the Order first class is adorned with a miniature golden star.

The ribbon bar for the Order second class is adorned with a miniature silver star.

The ribbon bar for the Order third class is adorned with a miniature white cross.

The ribbon bar for the Order fourth class has no device.

Recipients of the Order second class

Recipients of the Order fourth class