Order of the Red Banner of Labour 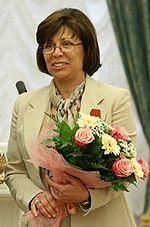 The Order of the Red Banner of Labour can be awarded to citizens of the USSR, to businesses, associations, institutions, organizations, and allied autonomous republics, territories, autonomous regions, districts, cities and other localities; it may also be awarded to persons who are not citizens of the USSR, as well as to enterprises, institutions and organizations located in foreign countries:[1][5]

The Order of the Red Banner of Labour could be awarded multiple times to the same recipient for successive deeds and long time merit.[3]

The design of the Order of the Red Banner of Labour evolved over the years. Its original design, called "type 1" was amended in 1936, this new variant will be identified as "type 2".

The "type 1" Order consisted of a 38 mm wide by 43 mm high silver badge in the shape of a cogwheel, at center, a disc bordered along its entire outer diameter by panicles of wheat. Protruding from under the lower half of the central disc, a red enamelled triangle pointing downwards. On the central disc in the background, a hydro electric dam, at center, a gilded hammer and sickle, at the top, a waving red banner bearing the inscription "Proletarians of the World, unite!" (Russian: “Пролетарии всех стран, соединяйтесь!”). At the very bottom of the cogwheel, the relief inscription "USSR" (Russian: “СССР”) on a stylised horizontal shield bisected by a smaller cogwheel meshing into the larger one. On the otherwise plain reverse, a recess at center bearing a threaded post, two rivets used to secure the hammer and sickle and the award serial number engraved on the lower portion opposite the "USSR" inscription. The Order was secured to clothing with a threaded screw and nut arrangement. The earlier nuts were 28 mm in diameter, later ones measured 32 mm.

The "type 2" Order also consisted of a silver badge in the shape of a cogwheel, it measured 38 mm wide by 44 mm high. On the lower circumference of the cogwheel, the relief inscription "Proletarians of the World, unite!" (Russian: “Пролетарии всех стран, соединяйтесь!”), below the cogwheel, a red enamelled relief five pointed star superimposed on a shield from which four short panicles of wheat protrude left and right. At the center, a disc surrounded by a gilded wreath of oak leaves bearing the relief image of a hydro electric dam, below the dam, blue enamelled water, at the center of the disc, the gilded hammer and sickle, from the inner left side of the disc, a gilded mast bearing a waving red enamelled banner protruding from the central disc, covering the upper portion of the cogwheel and protruding past its outer upper edge on which "USSR" (Russian: “СССР”) is inscribed in gilded letters. Along the outer circumference of the central disc's wreath, white enamelled slots spaced equally on the cogwheel. On the otherwise plain reverse, a concave recess at center bearing a threaded post, eight rivets (only three rivets on the post 1943 variant) used to secure the various parts to the badge and the award serial number engraved on the lower portion below the recess. The Order was secured to clothing with a threaded screw and a 33 mm in diameter nut until 1943 when it was secured by a ring through the medal suspension loop to a pentagonal mount covered by an overlapping 24 mm wide light blue silk moiré ribbon with 4 mm wide dark blue edge stripes.[4]

The individuals listed below were recipients of the Order of the Red Banner of Labour.[8][9]

The first recipient of the Order of the Red Banner of Labour of the RSFSR was Nikita Menchukov for saving an important bridge from being destroyed by flowing ice.

Order of the Red Banner of Labour of the USSR number 1 was presented to the Putilov (later Kirov) Works in Leningrad. The first individual awardees were V. Fedetov, A. Shelagin and M. Kyatkovsky for the rescue of a polar expedition.

Mikhail Gorbachev received the Order of the Red Banner of Labour for harvesting a record crop on his family's collective farm in 1949 at age 17, an honor which was very rare for someone so young. He is one of the Order's youngest recipients.