Order of the White Lion

From Infogalactic: the planetary knowledge core
Jump to: navigation, search
This article is about the Order of the White Lion. For other uses, see Order of the Lion.

The Order of the White Lion (Czech: Řád Bílého lva) is the highest order of the Czech Republic. It continues a Czechoslovak order of the same name created in 1922 as an award for foreigners. (Czechoslovakia had no civilian decoration for its citizens in the 1920s and 1930s). It was inspired by the Czech Nobility Cross created in 1814 by the Emperor and King Francis I and awarded to 37 Bohemian noblemen. 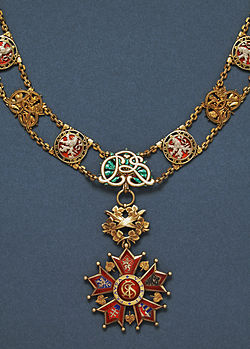 The order was created as an award for merit by Czechoslovakia for foreign citizens. The Order was established in five classes and two divisions, civil (with two crossed palms above the badge) and military (with two crossed swords above the badge). Medals were made of gold and silver. The numbers of recipients was originally limited, with the limits changing during later years. The Statutes of the order were amended in 1924, 1930, and 1936.

The badge of the Order was a five-sided red enameled star, the ends adorned with small balls, and with leaflets between the arms. In middle of the star is a silver lion, taken from the national coat of arms. The reverse or the Star is also red enameled, with the coat of arms of the former parts of Czechoslovakia (Bohemia, Moravia, Silesia, Slovakia and Carpathian Ruthenia).

The Order was remodeled after the change of the official name of Czechoslovakia and its national arms. A new regulation was issued for the order, and was divided into three classes (I, II, and III, with I being the highest). The Collar was reserved only for foreign heads of state.

The Order of the White Lion continued to exist in this form until the dissolution of Czechoslovakia. 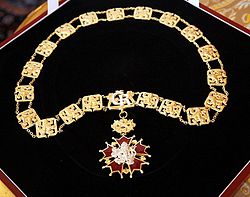 The Order of the White Lion awarded to Lech Kaczynski, the President of the Republic of Poland

The supreme grade of the Order of the White Lion, the first class accompanied by a gold neck chain may only be awarded to Heads of State. By law, the President is entitled to the first class insignia including the chain; after leaving the office, it may be conferred upon him for life by a joint resolution of the Chamber of Deputies and the Senate.